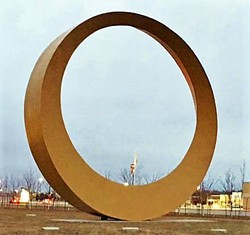 Golden Butthole of Macomb County Facebook
And on the seventh day, God bestowed a most-holy name upon the Sterling Heights $300,000 roadside attraction previously – and unofficially – dubbed The Golden Butthole. From here on out, it shall be known as 'The Halo.'

Upon receiving the submissions, the city was tasked with choosing its favorite five names. Once determined, voting was, once again, opened up to the public who had to choose between The Sun Gate, The Overture, the Standing "O", The Aurum, and The Halo.

With over 947 votes, The Halo was chosen. Submitted by Sterling Heights resident, Connie Truszkowski, the city suggests that folks can refer to the pricy golden icon as the "Halo on Hall Road" or the "Hall Road Halo" or just "The Halo." Or if you're one of the 11,000 of people who have joined the Golden Butthole of Macomb County Facebook group, it will forever be the Golden Butthole.

Even though, according to the city's community relations director, Bridget Kozlowski, the Golden Butthole was never in contention.

"Only appropriate names will be finalists," Kozlowski told Freep before the selected names were announced.

So there you have it. The saga of the Golden Butthole has been flushed. Many are reeling with denial, refusing to concede that The Halo is the chosen name. Others are feeling uplifted by their city's supreme art piece. But no matter which side of the sphincter you may find yourself on, a butthole is pretty much the body's halo and for that, we are blessed.