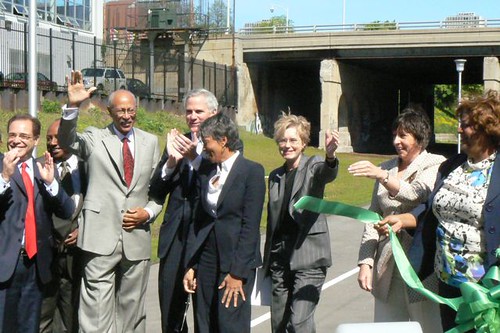 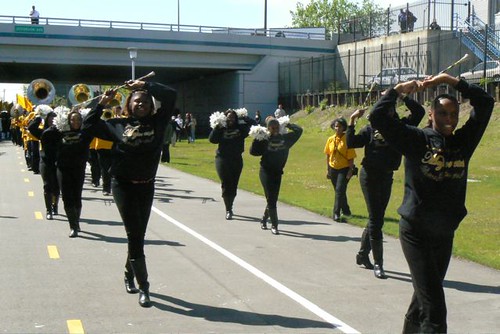 A marching band is among the first to "legally" walk the track.

We weren’t around for the opening of the world’s first mile of concrete road on Woodward in 1909. But we figure that the hoopla couldn’t have exceeded Thursday morning’s ribbon-cuttiing for the Dequindre Cut Greenway, what with the half-dozen or so principals onstage (including new Mayor Dave Bing — cutting his first mayoral ribbon! — and Wayne County Exec Robert Ficano), the marching bands, and a couple hundred community folk, bikers, rollerbladers and strollers ready to be among the first to “legally” use the cut.

Yes, the much-anticipated walking-cycling trail from Gratiot Avenue to Woodbridge Street measures a mere 1.2 miles. But those involved talked at length of the incredible challenges of turning a below-grade, abandoned railroad line, overgrown and refuse-cluttered, into the object of, well, near-veneration Thursday.

The railroad tracks, we were told, originally were at grade, connecting the then-bustling riverfront to points north as far as Royal Oak back in the 1800s. But as the city grew, the train traffic became an impediment, and was rerouted, 25-feet below street level. As it is, it’s thought to be the only below-grade bike trail of its kind in the country.

But the length of the trail — with its security cameras and emergency call boxes — is touted as less important than its role connecting the Eastern Market area to the burgeoning activity on the Detroit riverfront, including the RiverWalk and Tri-centennial State Park. When Ficano quipped that we’ll overtake Chicago’s extensive lakefront amenities, we had to shake our heads. But something unique and laudable is taking shape to make a difference in Detroit.

There was talk of upcoming DSO and DIA programs utilizing the cut. Of pocket gardens and new public art to complement the graffiti preserved from the cut’s earlier days.

Phase II of the cut project — no details were announced Thursday — will take it north to Mack.

We note that this was the “official” opening of the $3 million-plus project — funded by the Michigan Department of Transportation and private, nonprofit partners — that broke ground in 2007. Since last spring, plenty of bikers have been crossing barriers to make unofficial use of the cut, a suggestion that this is a bit of urban planning that actually meets a demand.