Rashida Tlaib was right: we impeached the motherfucker (again) 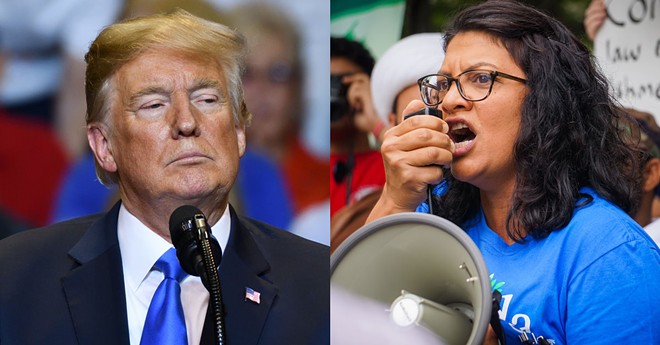 On her first day in U.S. Congress, Rep. Rashida Tlaib from Detroit famously promised, "We're going to go in and impeach the motherfucker!"

She was right. She was so right that the House even voted to impeach President Donald Trump twice — making him the first President in U.S. history to earn that dubious distinction.

On Wednesday, the House voted to impeach President Trump for "incitement of insurrection," following the horrifying images from last week in which a mob of Confederate flag-waving Trump-supporting fascists stormed the Capitol to attempt to overturn the election, resulting in a bloody clash that left five dead.

“Unity cannot happen without accountability, truth, and reconciliation. Today, I voted to impeach Donald Trump for an unprecedented second time to hold him accountable for his incitement of the deadly attack on the United States Capitol and our democracy last week.

I’ve called for the impeachment and removal of Donald Trump since the day I arrived in Washington, D.C. Donald Trump is a tyrant who has continued to endanger and bring harm upon the people of the United States, taking cruel joy in inflicting pain on our most vulnerable neighbors. Last week’s attack on the Capitol was the culmination of Trump’s destructive reign in this country and his unending assault on truth and reality. He must be removed and barred from ever holding public office again.

As white nationalists, unhinged conspiracy theorists, and other Trump loyalists continue to plot armed insurrection on social media platforms and the twice-impeached President insists he’s done nothing wrong, we cannot wait and hope a peaceful transition of power happens on January 20th. Trump and his supporters have already displayed that peace is nowhere in their minds. It’s time for the Senate to act and remove Donald Trump from office.

Let’s be clear: this did not begin with Donald Trump and it certainly will not end with Donald Trump. The Republican Party has actively encouraged and benefitted from the rise of Trump’s brand of bitter fascism. There are members of Congress who must be held accountable for their incitement as well. Above all, the widespread undercurrent of white nationalism running through our society and our chambers must be confronted honestly and eliminated. Deep inequality and state-sanctioned discrimination do not disappear when Trump leaves office and won’t ever unless we root it out.

The violence, destruction, and oppression of Trumpism will continue to happen, unless we, as elected leaders in this country, commit to doing the hard work of ensuring that every one of our neighbors has a country operating upon a foundation of true justice and equity for all.”


The last time Trump was impeached, the Senate did not move to to convict and remove him, with only one Republican, Sen. Mitt Romney, voting to remove him from office. There seems to be more bipartisan support for impeachment this time, with even longstanding Trump supporter Senate Majority Leader Mitch McConnell reportedly saying he believes Trump committed impeachable offenses, though he has also said that he will not bring the issue to a vote before the end of Trump's term next week.

Some believe the Senate could still vote to convict Trump after his term ends, and even bar him from pursuing an elected office again in the future. The Senate flipped to Democratic control in last week's runoff election, when Georgia elected two Democratic Senators.

Let's hope Trump doesn't try to incite any more attacks before then.