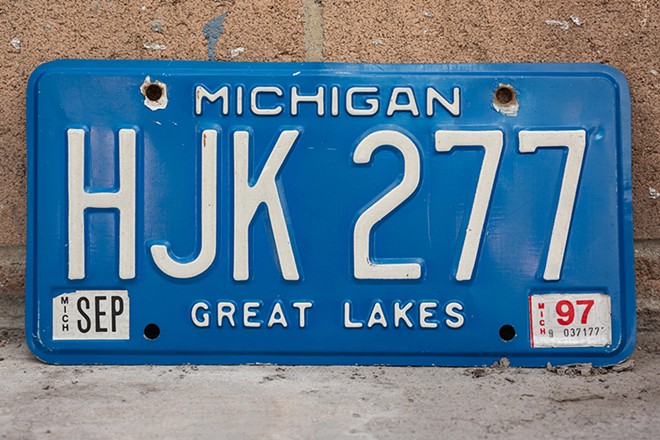 State Sen. Mallory McMorrow, a Democrat from Royal Oak, is willing to bet that enough drivers would cough up extra cash to rep one of Michigan's old-school blue license plates on their car.

The money raised would then go toward Gov. Gretchen Whitmer's pledge to "fix the damn roads."

Senate Bill 1146, which McMorrow sponsored and introduced earlier this week, would give drivers the option to pay an extra $100 to have a classic blue license plate, which originally ran from 1983 to 2007.

Jaycarlcooper, Wikimedia Creative Commons
Michigan black license plate ran from 1979-1983.
"Any Michigander who grew up here in the '80s and '90s remembers the simple, iconic design, and knows bringing back the blue plate is a no-brainer," McMorrow said in a release, adding, "Classic plate designs give Michiganders the ability to celebrate our unparalleled car culture. Bringing back the blue plate offers a creative way to generate much-needed revenue to help fix the roads without raising taxes."

Under the proposal, drivers could also get a black plate, which ran from 1979 to 1983. The way the law is now, you can only get a discontinued Michigan plate if your car is 26 years old or more and used in classic car shows.

The idea comes from California, where Los Angeles Assemblyman Mike Gatto, a "car guy" who restored a Chevy Camaro, wanted to come up with a way to make it easier for auto enthusiasts to restore their cars to a complete period look. Introduced in 2015, his legislation brought back California's black license plates that originally ran from 1963 to 1969, though the state charged just $50 for the plates.

The California plates were even made using the original molds, which were discobered in Folsom Prison. According to the New York Times, they were very popular, with more than 230,000 plates issued by the end of 2016.