The masterminds behind Movement talk about the past, present, and politics of the electronic music festival. 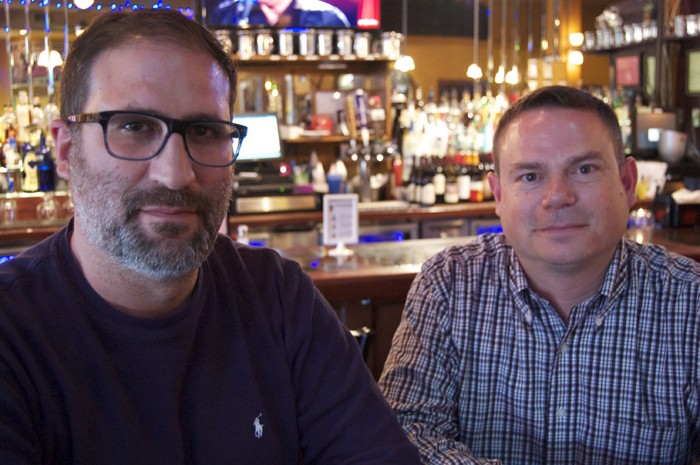 Jason Huvaere and Sam Fotias are sitting at a round high-top at Dino’s in Ferndale looking like two regular dudes when we meet up with them on a windy Thursday. No one would know from looking at these gentlemen that they’re the masterminds behind the city’s beloved electronic music festival. The tucked-in plaid shirts and general casual demeanor don’t lend themselves to the four days of (essentially) nonstop dancing taking place in Hart Plaza every Memorial Day weekend. But once they get to talking, it’s clear Movement is their labor of love.

Metro Times: Where are you guys at in the planning stages right now? Is everything pretty much done?

Sam Fotias: You’re always running into last minute things. You know, that Porta John guy finds out he’s short 25 Porta Johns or the golf cart guy can’t get your stuff there until three days after you really need it. Grand Prix is the week after us, so there is a drought in the city for office trailers. It’s just these little things that most people don’t think of, but there are all these little nuts and bolts that come together to enable you to do the event. There’s never an end to the little things that happen.

MT: Would you say you two are more hands-on than other music festival producers?

Jason Huvaere: I think because of the smaller size of our event, that, yeah, you can say we’re more hands-on because when you get into events where it’s 40,000 to 50,000 people per day, it’s impossible to wrap your arms around all that and know every contractor and know every single stagehand and know every single lighting guy. We’re doing events that are 25,000 and under per day and that allows us to be hands-on; it’s really our comfort zone. I think anything larger and it would start to get away from us and you start to hire subcontractor directors and subcontractor managers and then it’s just a whole different ballgame. What we do is a much smaller, boutique sort of entertainment.

MT: So do you want Movement to grow? Or do you want it to stay contained to the size of Hart Plaza?

Huvaere: It’s another layer of responsibility and management that we can manage, but I think the experience of being contained in Hart Plaza or a single festival site is really important to the message that this music and these artists are trying to get across. If we spread out too far, during the main event, during the day, some of that message may be missed. We do take our hours into the night with a series of afterparties, which allow people to see some of the diversity of Detroit venues and parties, but I wouldn’t say that we directly want or don’t want certain types of expansion. I feel that we’re very comfortable in our current capacity.

MT: So what do you see for the future of Movement?

Huvaere: Well, the Movement brand and the Movement event in Detroit are two different things. The Movement event in Detroit, I see it continuing, and I also see it being used throughout the course of the year to not only promote the city and drive people to our community, but also inspire young artists and up-and-coming DJs to strive to excel and to represent the city. As far as the brand goes, I’m not sure I really want to talk about that. We’ve had a lot of different offers from all over the country, but we feel that bringing all the attention back to Detroit is really the most significant thing about that brand.

MT: Paxahau has a big birthday coming up.

Huvaere: When we started Paxahau, it was the inspiration of five years of working experience that Sam and [I] and Jason Clark were already together on, so when we first began the anniversary party, it was really because the anniversary of when we registered the domain landed on Labor Day weekend, so it gave us the opportunity to bring a little recognition to the three-day weekend, and we like to party more than anything else. It also gave us the opportunity to reach out to certain artists that played some kind of role in our inspiration or history and share with them that it’s an anniversary event, and that creates a special atmosphere so that there is an excitement on both the artist and promoter level.

MT: Movement has become so much of the fabric of the city, and you’ve gotten to watch that over the nine years that Paxahau has been involved.

Huvaere: When we first started working on the event, it was still very niche. Only a few people who were outside of the electronic music community really knew about it, and they kind of respected it because of what they read about it, but now you’re seeing that a lot of those delusions of pretentiousness have come down, and now you’re getting all kinds of people that are coming down just for the music or just for the party or just for the Detroit experience. You’re getting people who aren’t super educated in the fields of electronic music that become educated through this event, and you wind up seeing them at the parties later and next year having an enhanced outfit and in couple years, they’re experts, so we’re seeing a lot of that transformation happening.

MT: The people-watching is a lot of fun. Where do the girls get those hairy boots?

Huvaere: [laughs] Now it’s huge; they used to make them. We used to actually stop people and be like, “Alright we gotta ask” and they were making all their own clothes. Now you can get them online, but in the early days, the early extreme fashion, a lot of the people we talked to were making their own clothes for the festival.

MT: It’s almost in some ways like a comic con, where people will stop and ask to have their picture taken them.

Fotias: That’s one of the best parts about it. It’s another asset or amazing thing about our event. Just the level of energy of people looking out for each other at the event and people having fun; it’s a lot different than some of these other larger “EDM-type” events where everyone is in this mass movement from stage to stage. There’s a collective high-energy vibe there, but it’s just not like it is here.

MT: I was hoping you could explain why the term “EDM” is so hated in the electronic music community.

Huvaere: I think it’s just like the word “rave” was hated when the parties started; nobody in Detroit would dare use the word “rave.” But 20 years later, it’s hard to describe without using the word, so people know what you’re talking about. “EDM” was something that I believe was started from corporate down, rather than from the underground up, so you’re always going to be dealing with a certain natural resistance to using the term. Being in Detroit, you’re going to get more resistance because Detroiters are so committed to authenticity.