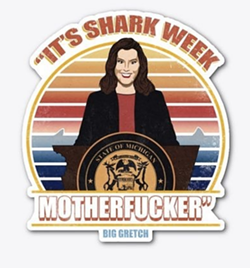 Trever Long
Discovery Channel's Shark Week might be over, but in Michigan, it's just heating up, bitches.

That's thanks to Governor Gretchen Whitmer, aka Big Gretch, who unleashed a viral hot-mic moment before her Democratic National Convention address Monday night when she said, “It's not just Shark Week. It's Shark Week, motherfuckers.” Though she only mouthed the expletive, the Michigan Twittersphere had no choice but to stan its spicy leather-clad queen.

It was only a matter of time — less than 48 hours, to be exact — until someone memorialized the catchphrase through a line of merchandise.

That someone is Detroit-area photographer Trever Long, who has launched a line of T-shirts, sweatshirts, stickers, pillows, and coffee mugs, all of which feature a colorful illustration of Big Gretch at the DNC podium, surrounded by her Shark Week comment.

“I’m pretty sure this is the most ridiculous thing I’ve ever made,” Long wrote in an Instagram post. “And because I love to commemorate little, absurd moments, I made this.”

The items, which can be purchased through teespring.com, range from $5 to $30, and all of the proceeds from Long's Shark Week merch will benefit the American Civil Liberties Union.

This, of course, is not the first time Whitmer's mug has been plastered on independently-made merch. Shirts praising support for the governor quickly flooded Etsy shops after President Donald Trump famously referred to Whitmer as “that woman from Michigan.” When Detroit rapper GMac Cash bestowed Whitmer with the nickname “Big Gretch,” the merch followed. And though there's plenty of anti-Whitmer T-shirts due to her strict COVID-19 preventative efforts (this shirt paints Whitmer as the top Nazi, while this face mask reads “That dictator from Michigan”) she also appears as a saint, thanks to one Etsy crafter who slapped her face on a prayer candle.

So I’m pretty sure this is the most ridiculous thing I’ve ever made, but first some context in case you missed it… Before delivering her speech at the Democratic National Convention, Michigan governor Gretchen Whitmer (aka Big Gretch) was recorded on a hot mic saying “it's shark week, motherfucker." And because I love to commemorate little, absurd moments, I made this. BUT WAIT, do you love ridiculous artwork that ALSO helps to support the ACLU? Well then I have great news for you! This design is NOW available to purchase on many products (including shirts, stickers, mugs and MORE) with 100% of the proceeds being donated to the American Civil Liberties Union. LINK IN BIO. Check it out, or maybe considering sharing this post. Hope you enjoy, thanks for reading!