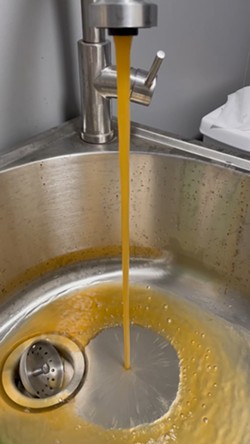 Courtesy of a tipster
Rust-colored water coming from a tap on Detroit's east side.
Detroit officials are urging residents on the east side to avoid using their tap water following reports of discolored water on Wednesday.

A tipster sent Metro Times a video showing the discoloration.

The water issue has been reported in neighborhoods including Cornerstone Village, East English Village, and Morningside.


The city's water department is advising customers to wait at least two minutes while the water runs to see if the color goes away before using their taps. If it doesn't, they should report the issue by calling 313-267-8000.

Officials are urging residents to avoid using their tap water "out of an abundance of caution."

The issue follows the massive flooding last week stemming from historic levels of rainfall in the area.