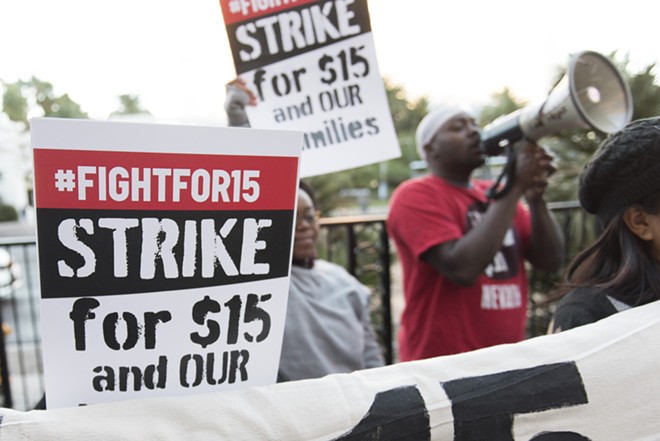 Jason Ogulnik / Shutterstock.com
Demonstrators gather for a Fight for $15 protest outside of McDonald's restaurant in Las Vegas.

McDonald’s workers in Detroit walked out in protest last week over what they characterize as the company’s failure to address a widespread problem of sexual harassment in the workplace. An employee told the Advance Tuesday that they plan to strike again soon.

In addition to Detroit, McDonald’s employees also went on strike on Oct. 26 in 12 U.S. cities including Chicago, Miami, and Houston as part of a larger effort led by the “Fight for $15 and a Union” labor group.

The group, which works toward securing a living wage and a right to a union for workers, is a branch of the 2 million-member Service Employees International Union (SEIU).

The strike was the fifth one in the last three years for McDonald’s workers. Verbal and physical harassment are at the heart of the strikers’ complaints, which they say run rampant in stores and add hardship to a job that many feel does not pay a living wage.

McDonald’s announced in April that it would establish new reporting procedures and a sexual harassment training requirement starting in January.

But workers say that is not enough. The strike comes on the heels of a September lawsuit filed by a teenage McDonald’s employee and her parents, who say the then-14-year-old was abused, harassed, and eventually raped by her new store manager — a convicted sex offender.

The employee said she did not receive sexual harassment training or guidelines on reporting an incident at the Pittsburgh-area store.

Aaliyah Moore, 19, works at a McDonald’s in Detroit and walked out alongside her colleagues on Oct. 26.

Moore told the Advance on Tuesday that the lawsuit was her main motivation for protesting, and she wishes McDonald’s would “pay more attention and take [these issues] more seriously.”

A version of this story was originally published by Michigan Advance. It is republished with permission.