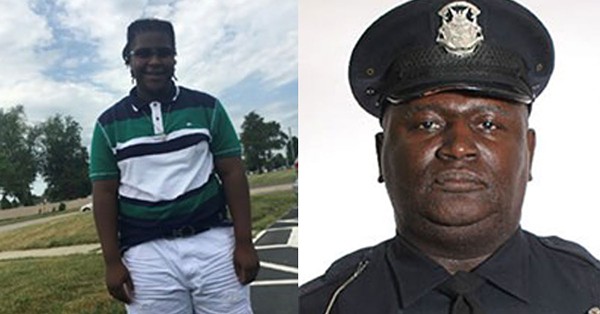 A veteran Detroit neighborhood police officer has been taken off patrol duty for making insensitive remarks about a 15-year-old who was killed in an ATV crash after a Michigan State Police trooper chased and tased him.

The Detroit officer has been sidelined following a Free Press investigation into the August 2017 death of Damon Grimes. The news outlet reviewed hours of video footage from the scene of the crash as ex-MSP trooper Mark Bessner prepares to stand trial for murder in the case. In addition to the callous remarks, the paper reported two details that prosecutors may use against Bessner: The trooper is heard admitting to using a stun gun on Grimes and the emergency lights on his cruiser don't appear to activate until a full 24 seconds after the crash.

Let's take these one by one, starting with the veteran Detroit cop who was serving as a Neighborhood Police Officer — a special role occupied by only a few dozen patrolmen and women tasked, ultimately, with gaining the trust of city residents.

This officer, identified by the Freep as Aubrey Wade, stood by as Grimes' lifeless body was pulled into an ambulance. When asked by another Detroit police officer whether a cruiser should escort the ambulance to the hospital, Wade reportedly says "Hell no, if an officer was shot we'll do that."

When told Grimes' mother should go to the hospital, Wade appears to wave off the idea, reportedly saying of the heavy-set teen, "That’s a grown-ass man."

The Free Press reports Wade went on to say, "No sympathy at all for bullshit. Motherfucker wanna be grown, ya act grown, you gotta fuckin' deal with it.”

Detroit Police Chief James Craig took Wade off street patrol on Wednesday, telling the Freep he hadn't been aware of the officer's remarks until the paper brought them to his attention.

Wade's statements are cringe-inducing on their own, but even moreso when juxtaposed with the sensitive reactions of other Detroit police officers. The Free Press described other officers present as "disgusted" by what happened. One officer was heard muttering in response to MSP, "His pulse is weakening because he was on that fuckin' thing, and you chased his ass," while another explained, "They fuckin' tased his ass while he was cruisin'."

Bessner deployed the Taser from his moving vehicle, against MSP policy. Now, the possibly late activation of his emergency lights might face scrutiny as well.

The Free Press reports a nearby security camera showed the lights on Bessner's cruiser go on 24 seconds after the crash, as Bessner's partner was already walking away from the vehicle. Until now, State Police and prosecutors have not said whether lights were on during the chase, the paper reports.

State Police policy requires troopers to turn on their emergency lights, sirens and in-car video recording systems during a pursuit.

The agency's chase policy, meanwhile, is less limiting than Detroit's, which says officers can only chase in the event that they suspect a felony has occurred. MSP allows officers to chase at their own discretion, and kept that policy in place for officers patrolling the city of Detroit. That issue was highlighted in our November cover story on Grimes' death.

You can read more about the latest revelations in the case in today's Free Press story.