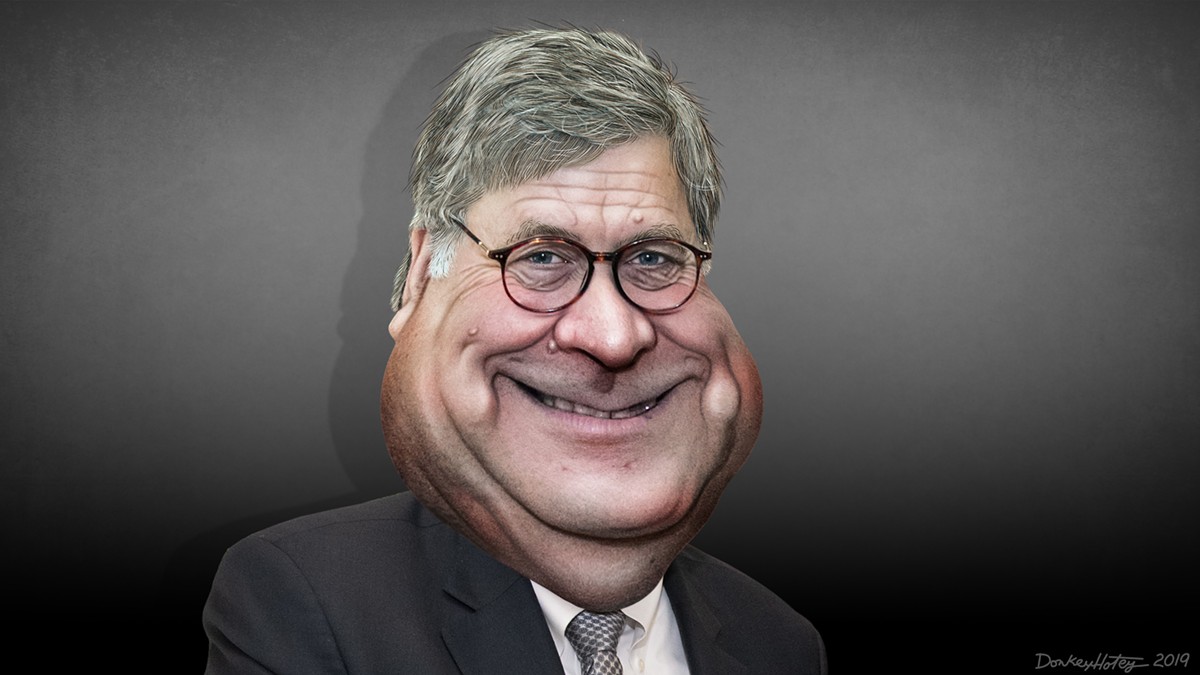 The Grinch who ate the constitution. Donkey Hotey/Creative Commons

One of Donald Trump's few substantive defenses against the allegations that brought about his impeachment last week is that he didn't try to extort an investigation into Joe Biden and a crackpot DNC server conspiracy theory for his own political benefit, but rather, he sought "a favor though" for the good of the country.

The evidence for this, the president and his defenders say, is in the not-quite-a-transcript the White House released of the July 25 call between Trump and then-newly elected Ukrainian president Volodymr Zelensky. Zelensky thanks the U.S. for pressuring Russia through sanctions, then expresses interest in buying more missiles.

And Trump, of course, replies, "I would like you to do us a favor though because our country has been through a lot and Ukraine knows a lot about it. [...] There are a lot of things that went on, the whole situation. I think you're surrounding yourself with some of the same people. I would like to have the Attorney General call you or your people and I would like you to get to the bottom of it."

Zelensky mentions that one of his assistants had spoken to Rudy Giuliani, the president's personal lawyer. Trump says, "I will ask him to call you along with the Attorney General."

In Trump's telling, that he referenced Attorney General William Barr shows that he was concerned about corruption in Ukraine.

Put aside that this runs contrary to every known fact about Donald Trump. Instead, focus on how casually Trump lumps in the attorney general of the United States with his lawyer, who'd spent the better part of a year in Ukraine trying to manufacture a sham investigation into the Bidens — and who, incidentally, is reportedly under federal investigation.

In Trump's mind, they're exactly the same. They're his guys. That should be a red flag.

Trump doesn't see it that way, however. So a year ago, Trump forced out his first AG, Jeff Sessions — the first U.S. senator to endorse his presidential campaign — because he deemed Sessions insufficiently loyal during Russiagate. For his second AG nominee, Trump wasn't taking any chances.

Bill Barr believes in the unitary executive theory — put simply, the president is essentially above the law and has total control of the government's law enforcement system. Barr was also willing to play lackey.

So, for instance, when the Mueller report came in, Barr dashed off a letter to Congress saying — deceptively, it turned out — that Trump had been cleared of wrongdoing, obscuring Mueller's findings that the president had repeatedly obstructed justice and that he was only not charged with a crime because the Department of Justice policy forbade it.

And when, with Trump staring down impeachment earlier this month, the DOJ's inspector general released a long-awaited report demolishing Trump's batshit claims about a Deep State vendetta against his presidential campaign, Barr sent out an unprecedented statement contradicting his department's IG. If nothing else, he's a company man.

More troubling was his speech to the Federalist Society in November, in which he leaned into his role as a partisan actor, accusing anyone to the left of Attila the Hun of "undermining [the] rule of law" and Congress of — as a "pursuit of choice" — "drown[ing] the Executive Branch with 'oversight' demands for testimony and documents."

These are not co-equal branches, Barr believes. If the president finds congressional oversight annoying, he should ignore it.

Also, progressives — what with their "civil rights" and other such nonsense — are snowflakes, while conservatives are grounded in reason and, as such, at a political disadvantage.

"In any age," Barr opined, "the so-called progressives treat politics as their religion ... Conservatives, on the other hand, do not seek an earthly paradise. ... Conservatives tend to have more scruple over their political tactics and rarely feel that the ends justify the means."

Obviously, Bill Barr has never heard the name Mitch McConnell or watched C-SPAN in the last decade or so.

But gaslighting — or, more charitably, being obtuse — isn't what bothers me most about Barr; that's par for the course in the modern GOP.

It's this: Earlier this month, Barr told a roomful of cops that "the American people have to focus on something else, which is the sacrifice and the service that is given by our law enforcement officers. And they have to start showing, more than they do, the respect and support that law enforcement deserves. ... [If] communities don't give that support and respect, they might find themselves without the police protection they need."

In other words, show your cops love — i.e., don't protest if they beat up or shoot a person of color — or, well, you just never know, do you?

This is an attorney general, of course, who has criticized local district attorneys in Philadelphia and St. Louis for calling for police accountability and who has demanded zero tolerance for "resisting police."

All hail the police state.