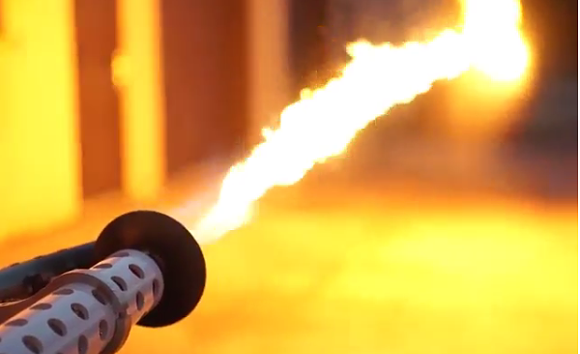 The CEO of Ion Productions Team, a Troy-based company selling some of the nation's first commercially available flamethrowers, said sales have shot up recently as lawmakers, including Warren, MI's mayor Jim Fouts, criticize his products and call for restrictions on their use. "Business is skyrocketing higher than ever due to the discussion on prohibition," Byars told ARS.

One product in particular that Byars and his team can barely keep stocked is the XM42, a flamethrower that "can shoot fire over 25 feet and has more than 35 seconds of burn time per tank of fuel. With a full tank of fuel, it weighs just 10 pounds," ARS' Cyrus Farivar says.

"Shockingly," Farivar writes, "there are no current federal regulations on the possession, manufacture, sale, or use of flamethrowers."

"These devices are not regulated as they do not qualify as firearms under the National Firearms Act," Corey Ray, a spokesman with the Bureau of Alcohol, Tobacco, and Firearms, told Ars by e-mail.

At the state level, California requires a permit while Maryland outright bans them—Ars is not aware of any other state-level regulation. The Inhumane Weapons Convention, which the United States signed in 1981, forbids "incendiary weapons," including flamethrowers. However, this document is only an agreement between nation-states and their militaries, and it did not foresee individual possession.

A new bill in Troy, Michigan, proposed earlier this month would forbid "storage, use, and possession of flamethrowers in the city." Violations of the law would constitute a misdemeanor punishable by up to 90 days in jail, a $500 fine, or both in addition to seizure of the device.


While both the Ion Production Team and lawmakers wait to see where, exactly, this proposed bill will go, Byars plans to keep selling his flamethrowers and, in the last few weeks alone, has turned over some 350 units at $900 a pop.

Here's a video, uploaded to Ion's Instagram account of the XM42 in use. See more photos and videos right here, and read the full story at ARSTechnica.

Alaina Nutile is a Web Editor who oversees all digital content and social media initiatives for Detroit Metro Times and Cleveland Scene Magazine. Previously, she interned at Business Insider in New York City, and at La Hora in Quito, Ecuador. Alaina is a graduate of Kalamazoo College where she double majored in...
Read More about Alaina Nutile
Scroll to read more Metro Detroit News articles