21 questions for 2021, part 2: Now that the insurrection changed everything, what exactly will change? 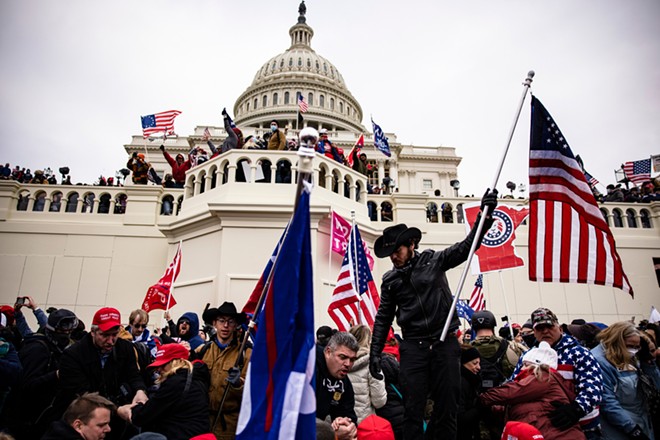 Leave it to me to publish the first of a two-parter just before MAGA terrorists stormed the Capitol — which, of course, upended my plans for this week's column.

In the moment, it's difficult to know whether seemingly transformative events will transform anything. Intuitively, however, this feels like an inflection point. The authoritarian current flowing through the Republican Party was displayed on our national mantlepiece. How we confront it will be a defining story not only of 2021 but of the decade to come.

So without further ado, here are questions 11–21, amended to include recent events.


11. Will Republicans back impeachment? No sooner had Wednesday's putsch failed than the same Republicans who'd tried to disenfranchise millions of voters complained about how "divisive" it would be to impeach Donald Trump. Spare me. A Senate trial probably won't come until after Trump leaves office, but it will put on record which politicians believe violent insurrection comprises an acceptable form of politics.

12. Will Trump be held accountable? No president has left in his wake a trail of obvious criminality like Trump: tax fraud, obstruction of justice, bribery, campaign finance violations, election tampering, and, possibly, incitement. Trump might pardon himself — which President-elect Joe Biden's Department of Justice would likely test in court — but there's nothing Trump can do to stop New York from filing state charges. A prosecution would also be "divisive." But letting Trump slide in the name of "unity" would only signal future demagogues that there are no consequences for their actions.

13. Will the GOP face a reckoning? The Capitol coup was the dog catching the car, the culmination of Republican obsequiousness to reactionary populism. A few Republicans seemed to grasp the Faustian bargain they'd made. Catering to the MAGA crowd will lead the GOP into a radicalization death spiral — and do irreparable harm to the country along the way. Standing up to them, however, will mean primary challenges they might not survive.

14. Who will become the GOP's leader? Insurrectionist Sens. Josh Hawley and Ted Cruz went all-in on Trumpism, but they've become pariahs on the Hill and with corporate donors. Other 2024 contenders have positioned themselves as traditional conservatives or are trying to thread a needle between MAGA and the Chamber. These internecine battles won't necessarily predict the next nominee, but they will offer hints about how the Trump movement's future will be in the post-Trump era.

15. Will conservative media act more responsibly? You'd think — hope, anyway — that spewing conspiratorial nonsense that got people killed would prick a news executive's conscience. But Fox News dabbled in reality after the election only to watch the Trump hordes defect to the no-fucks-given insanity of OANN and Newsmax. And right-wing websites learned long ago that there are few social media shares in responsible journalism. Having spent a generation telling conservatives that fact-based reporting is their enemy, their media ecosystem contains few incentives to rein in misinformation unless compelled by outside pressure.

16. Will social media act more responsibly? Post-insurrection — and, conveniently, post-election — Big Tech deplatformed Trump and his most deplorable supporters. Facebook temporarily banned him, Twitter permanently. Apple and Google Play booted the cesspool Parler from their app stores, and Amazon Web Services announced it would no longer host the site. In bowing to public pressure, the companies grabbed low-hanging fruit. But these sites remain mechanisms for spreading conspiracy theories, misinformation, and organizing violent actions — and for other world leaders to suppress dissent.

17. Will Democrats strengthen democratic institutions? Even before Nov. 3, American democracy faced a legitimacy crisis: Through anachronisms like the Electoral College and the increasingly white, rural bias of the Senate — as well as gerrymandering and voter suppression — our system failed to translate majority beliefs into majority policies. Democrats have several ways to fix it: automatic voter registration, reestablishing the Voting Rights Act, clarifying the Electoral College Act, and granting Puerto Rico and Washington, D.C., statehood, among them.

18. How quickly will the pandemic be controlled? Biden pledged to immediately release the government's supply of vaccines and distribute 100 million vaccines within his first 100 days. The former is a risky strategy that could delay booster doses, the latter a heavy lift considering the disaster Biden will inherit. Biden says he'll invoke the Defense Production Act to speed up vaccine production, but he'll need help from Congress to get needles in arms.

19. How will Biden approach China, Iran, and Russia? Trump started a clumsy trade war with China, blew up the Iranian nuclear deal, and sucked up to Vladimir Putin. None of these things worked out well. Biden will likely stake out a more flexible but still aggressive posture toward China; seek to join the Iran agreement, which won't be easy; and develop the kind of clear-eyed, coherent Moscow strategy Trump never had. At the same time, he'll have to repair the considerable damage Trump has inflicted on international relations.

20. What lessons did Biden learn from 2009? Biden had a front-row seat when Republicans blocked everything the Obama administration proposed, so he should know the kind of obstruction he's about to face and how to beat it — not by spending months trying to win over one Republican in the name of bipartisanship, as President Obama did, but by ramming through as much as you can as fast as you can. Whether a bill passes the Senate by one vote or 20, it still becomes a law when he signs it.

21. Can Biden's center hold? Biden will take the oath at a more precarious moment than any president since FDR: 4,000-plus COVID deaths a day and an economy sliding back into recession; a polarized, dysfunctional government; a sociopathic predecessor who incited an insurrection; radicalized, authoritarian opponents and an electoral system rigged for their pleasure. Put another way, he'll inherit a shit show inside a clusterfuck inside a dumpster fire — a Russian nesting doll of crises. Things will go sideways, and whatever honeymoon Biden gets won't last long.