Tilted Axes to return to Detroit — and Royal Oak? 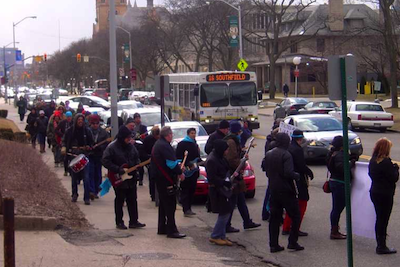 This year he's back, and his choices are even more interesting, in that he's chosen to participate in larger events that perhaps match the creative spirit of his endeavor.

The axes will be rocking in the Detroit area for three days this March, including March 22, at the Marche du la Nain Rouge (this iteration of Tilted Axes will become the decidedly Francophone "Haches Incliné"), adding to the insurrectionary spirit of the event. His schedule also includes the Bestest Concert Ever IV, on March 21, at the Royal Oak Farmers Market, and something called the Equinox Procession in downtown Royal Oak on March 20.

Are you a guitarist and interested in participating? Let Patrick Grant know! He's a hometown boy at heart and super-approachable for a New York-based experimental composer. Email him at [email protected] For more info, see Tilted Axes' Facebook page.