The Motels’ Martha Davis on surviving the ’80s, the subconscious art of songwriting, and the tragic side of motherhood 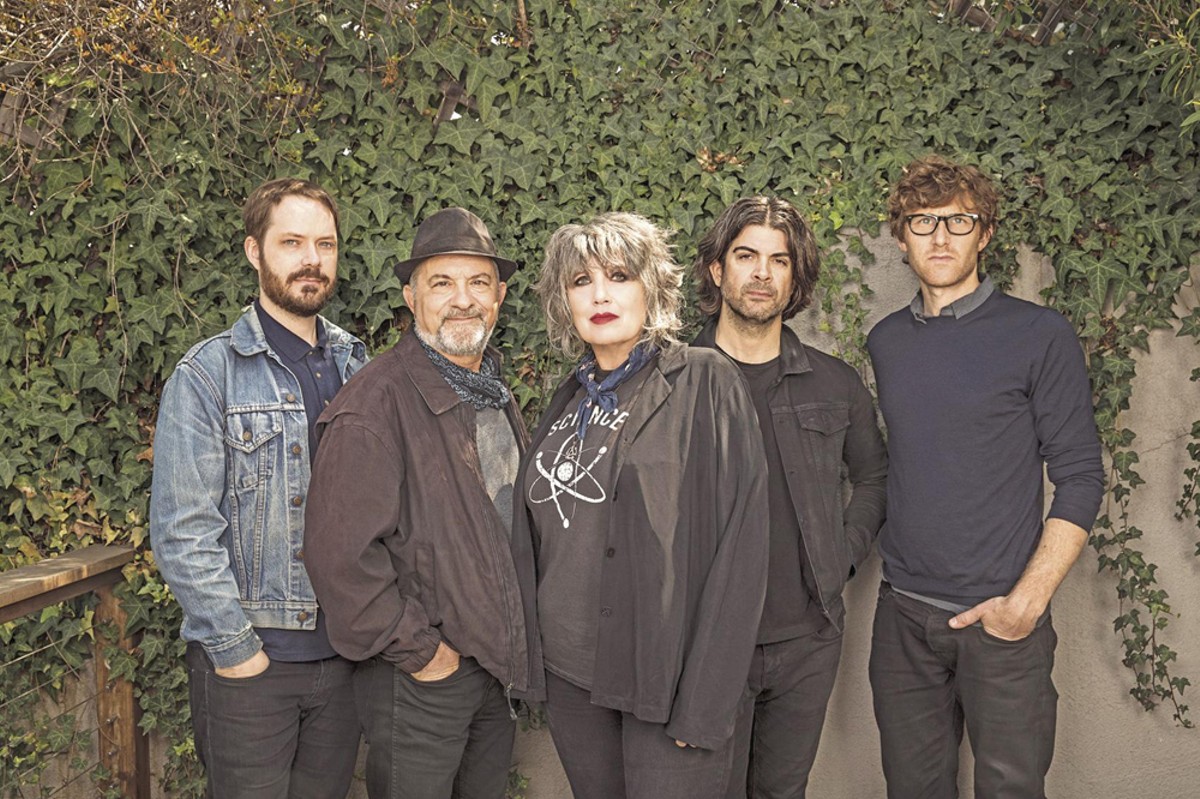 Farm animals have a friend in Martha Davis. The 69-year-old Motels frontwoman lives on a 72-acre farm outside Portland, Oregon, where she cares for alpacas, a squad of dogs, and chickens, one of which, named Ruthie, has found refuge indoors to escape her natural sexual predators.

"Roosters are very rapey," Davis says. "So I brought her inside the house to give her a little hospice from being raped all the time."

Davis describes her home as a sanctuary and admits she's never actually seen all of her sprawling property, but envisions taking a machete this spring to clear out some of the overgrown brush and create a walking path. Despite having been raised in Berkeley, California, and, later, in Los Angeles, Davis says she's always been a bit of a "dirt" girl and says she spent a lot of time in her yard as a child exploring.

"I'm much more at home here than I ever was."

Home for Davis is also in the studio, something she says she would be dead without. Belonging has long since been a theme in the Motels' songwriting, as evidenced by the band's two most successful hits, 1982's "Only the Lonely" and 1983's "Suddenly Last Summer." The latter finds Davis living through the memory of a never-ending summer cut short. "It happened forever, for a short time/A place for a moment, an end to dream/Forever I loved you, forever it seemed," Davis sings in her bright tonality that's somewhere between a command and a whisper, surrounded by melancholic synths, and a dreamy bassline.

"They're old friends," she says of the hits. "They're wonderful. It was my birthday when we played Boston, and the crowd couldn't have been sweeter, and I swear to god they applauded for like five minutes. I was just standing there almost embarrassed. When a song gets to a point where it represents that much to people, it's breathtaking," she says. "However that song happens, [it evolves] and art keeps going even after it's made — it turns into something else."

It's been 41 years since the Motels released their self-titled debut, which came as a result of years of missed opportunities, lineup changes, and lack of label interest as the band's previous incarnations, the Warfield Foxes and, later, as Angels of Mercy. The debut, or as Davis says, "the one without the hits," is her personal favorite, rivaling 2018's The Last Few Beautiful Days, Davis' vibrant and deeply personal return to the Motels and the first record since the death of her eldest daughter, Maria.

"The record became a story, and all the songs fit together in a way where it basically kind of mapped out what I saw as my life, you know, with my kids and trying to become this rock star and then trying to make it. It just, all of a sudden, became very, very, very personal. And and that's the beauty of art. It will take you on the journeys. I never tried to touch the steering wheel. I literally sit in the backseat [and] go, 'OK, where are we going?'" she says. "I don't know where it comes from. Like I picked up my guitar and I'm just sitting there and literally just started playing "Only the Lonely" like it had already been written. You have to get the fuck out of your own way."

The Last Few Beautiful Days, arguably the most cohesive and focused record in Davis' discography, confronts a number of hot topics, though through the lens of ambiguity and written as stories rather than protest songs. Inspired by human behavior and the turbulent world in which we live, the record is true to the Motels, particularly on "Lucky Stars," which could easily fit on the tracklisting for Careful, the Motels' sophomore release, which turns 40 this year. Though the record pans out to paint a sweeping portrait of a world in crisis, The Last Few Beautiful Days is also an examination of a mother, her daughters, and the cost of fame. The song "Criminal," Davis says, could be about a number of men, but is targeted at the suits of big pharma.

"My oldest daughter died of fentanyl overdose, and that was because she became addicted to oxy like everyone else," Davis says. "And so as far as I'm concerned, the medical industry or the pharmaceutical industry, they murdered my daughter, and I figure if you can draw one or two dots together they killed her. And there's absolutely no consequences. They don't even get a slap on the wrist."

The record's opener, "Punchline," addresses Davis' relationship with her youngest daughter, Patricia, with whom she is no longer in contact with. "I've basically lost both of my daughters," she says. "It breaks me."

When Davis was 15, she gave birth to Maria, and moved to Tampa, Florida, with her Air Force husband, a man Davis describes as being a stranger and the same man rumored to be the subject of the Motels' "Celia" ("He wasn't gonna kill you/He was just gonna fuck up your pretty face"). Soon after, she gave birth to her second child. And when Davis was about 20, her mother killed herself.

"Well, I was a mess. I was a mess at that time and there were a lot of reasons for that. I hadn't processed the death of my parents when that happened, I was trying to be a mom and I was a bad mom," Davis confesses. "And there was a lot that was going wrong. And it was going wrong because I was taken up in the whirlwind of wanting to be loved,"she says. "I mean, basically any artist — most of us are insecure, most of us were very shy and awkward youngsters. That's why we scampered off to our rooms and grabbed our instruments and made our own world. That becomes easy picking for the dark side."

Davis reflects on her mother's influence, recalling the times her mother read from Henry Miller books and the revelations Davis had after finding her mother's diary following her death. While her dad urged Davis to go back to school or pursue secretary training, she found inspiration in her late mother's unfulfilled dreams of being an author, an artist.

"I could feel that she just wanted to be an artist, but she'd write, Oh I have to go to the PTA and this, that, and the other, and I saw her frustration, which possibly killed her, that she didn't do what her heart wanted her to do," Davis recalls. "So I sat my kids down when they were very tiny and I said, 'I don't know how this is going to work, but I'm going to try to be a musician, this is going to be hard.' And I tried, and it worked — sort of. I mean, my oldest daughter, I was very much in tune with her for the last five years of her life. She'd go, 'Mom we're making our own Grey Gardens here.' She was hilarious and she was beautiful and I miss her so much. I miss them both so much."

The Last Few Beautiful Days marked a turning point for the Motels. It was the first record released on Davis' label, Remarkable Records, a decision that has allotted the singer the freedom she requires to create without some of the luxuries of label support, like paid studio time and tour stipends. She admits to couch surfing to save money when she travels and refers to her farm as a "money grabber," but with the financial struggle comes yet another record, titled Escape From Planet Earth, a double album composed of new and old material that is already written and mostly recorded. Davis credits her career's sustainability to one thing: peaking and not maintaining that level of fame.

"I'm really glad that my career didn't stay on that trajectory," she says, "because I don't think there is anything more detrimental to humans than fame — I really don't. I mean, it's beautiful, it's glorious, all my bills are taken care of. But at the height of it, I mean, I got so removed from reality, you know, in terms of, like, day to day ... how regular people live, and that's a bad bubble to be in. Your feet are definitely not on the ground, and your sense of empathy gets screwed with. It's a very happening place to be — there's limo rides and there's champagne and drugs and all that stuff that's really crazy. There's so many pitfalls."

Davis admits to not really paying any attention to pop radio, name-dropping Taylor Swift like a curse word. She much prefers NPR and classical music, yet she can't help but catch the undeniable influence of the Motels and other artists of the era/genre in passing. She finds it flattering, but thinks derivative contemporary artists may have missed the point.

"The one thing that we wanted more than anything else in the world was not to sound like anyone else. No two bands sounded the same. Everybody wanted to look different. It was all about individuality," she says of the '80s.

"And so when I hear bands copying these things, I'm like, that wasn't the point. The point was to be as different as you can from anything," she says. "Blondie didn't sound like Chrissie [Hynde], you know? I call it the '80s wont-go-awaytees. And they won't — they don't seem to."