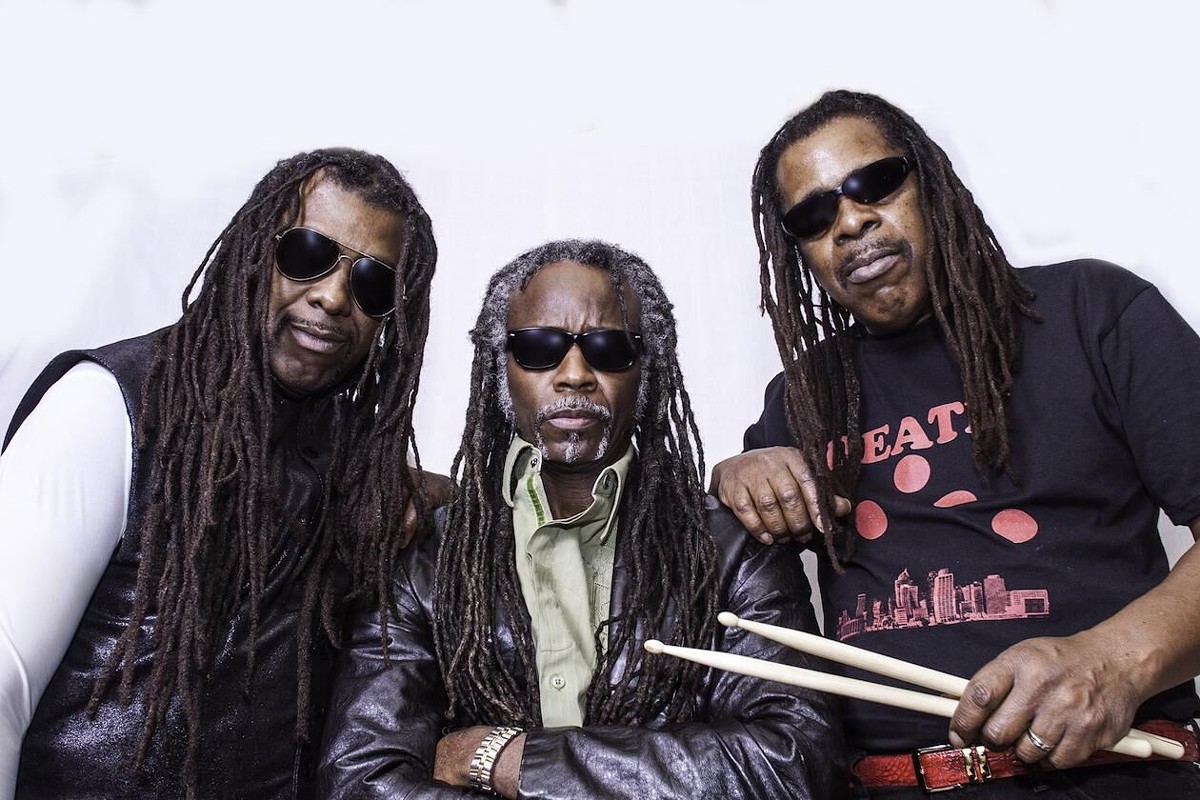 By now, many people have heard the story of Death. In the early 1970s, brothers David, Dannis, and Bobby Hackney were living on the east side of Detroit and formed a rock 'n' roll band inspired by the likes of the Who, MC5, and Alice Cooper. They called the band Death, and recorded at the legendary United Sounds Studio.

Their music is now recognized as "proto-punk," though it was years before that term was widely used. They released one 45 rpm single in 1975: "Politicians In My Eyes" backed with "Keep on Knocking," on their own Tryangle label.

After the disappointment of failing to secure a record deal, the brothers gave up on their rock 'n' roll dreams and relocated to Burlington, Vt. They shifted their musical attention to gospel rock, with a band called the Fourth Movement, and later started a reggae band called Lambsbread. Death was the distant past — or so they thought. Their single was rediscovered, which eventually led to the release of their first album, For the Whole World to See, on Drag City in 2009, decades after its recording.

The Hackneys were in awe that their band, which they had put their heart and soul into and experienced so much rejection, was finally gaining legions of fans. Two more albums of archival Death recordings, Spiritual Mental Physical and III have since been released on Drag City. The documentary A Band Called Death was released to great acclaim in 2012. Unfortunately, guitarist and bandleader David Hackney didn't live to see their delayed success; he passed away back in 2000.

After the first album's release in 2009, the band began playing shows, adding guitarist Bobbie Duncan, who they'd long worked with in Lambsbread. Playing live was something they didn't do much in the original era of the band. "We did not play too many gigs," drummer Dannis Hackney says. "We grew up on the east side of Detroit — not a lot of places to play for guys like us to play what we were playing at the time. We basically honed our skills in our bedroom, and from the bedroom we took it to the garage. And from the garage we took it to the studio.

"There was places to play, but at that time we were going through a lot of trouble with the name. People just couldn't get used to the name."

David came up with the band name and concept of Death, and infamously opposed the idea of changing it. "Dave was telling us that 'death is the ultimate trip,'" Dannis says. "No one gets higher than that. That's just the way it is. That's the last thing you're gonna do. The reason he gave us the name was a very spiritual reason. From then on, no matter what we go through, no matter what people say about it, it's gonna be that name."

The band had a deal with Groovesville Productions in the mid-1970s, and were shopping around recordings to labels. While labels expressed interest, it was under one condition: The name had to go. David refused, and they were never able to secure a deal. "Me and Bobby knew that having that name represented a long road," Dannis says, "[but] from the time that David incepted the idea it hasn't changed."

Six years after their resurgence, the band has just released their first album of new Death material, written and recorded with Duncan, and appropriately titled N.E.W. "It was started off by our guitar player Bobbie Duncan, who was so inspired by what we were going through in the first period of the discovery of Death that he wrote a song," says bassist Bobby Hackney. "We all rallied around him and we worked on it and it became the song on the album called 'Relief.' That was the gateway."

"The process of recording was the same as it's always been for us," Duncan says. "We are into what we call 'capturing a performance.' We lay the track together as a three-piece unit. Any overdubbing that has to be done, it's just vocals and maybe an extra guitar. We've been doing it since day one like that."

"We all learned it in the '70s at the legendary United Sound recording studios in Detroit," Bobby Hackney says. "That was really the college for myself, David, and Dannis. That's where we really learned. It was the atmosphere of kind of like a recording factory. You had musicians coming in and out. Motown sessions would come in in the evening and do overdubs. A number of people from Stax Records and from L.A., and a number of rock bands [were coming in]. We were proud to record there and be in the legacy of all those fine musicians. United Sound is real special to us."

When they first started playing shows as the reformed Death, they also included Lambsbread songs in their set, to a mixed reaction from fans. "At the time we were transitioning from Lambsbread to Death," Bobby says. "We were telling the audience our story, and we brought a little bit of Lambsbread with us. Rock 'n' roll has a way of doing things where you have to keep it rock 'n' roll. So it's all Death now."

And things are definitely not slowing down for Death. "Before the documentary we were out doing some tours. But a lot more people have tuned into our story because of the documentary and it's been tremendous for us," Bobby says. In addition to the new album, the band recently self-published a book. "It's just a journey walking hand in hand with the making of the film," Bobby says. "I wrote the memoir. The name of the book is Rock N Rock Victim: The Story of a Band Called Death. I think it's for those who really liked the movie and want more details of the story."

The former Detroiters' show at the Blind Pig on Sunday, Sept. 13 is actually their first in Ann Arbor. "We loved Ann Arbor as a kid," Bobby says. "Our older brother used to live in Ypsilanti, so we'd just walk over to Ann Arbor and enjoy the town." Dannis says that he and his brother "used to practice martial arts out there; we did a lot of that, a lot of canoeing too." "We know that Ann Arbor's the home of Iggy," Bobby says. "We're really excited to go and rock Iggy's town."

At the Ann Arbor show, Death will be joined by special guest DAS, aka Donald Angelo Schwenk, who knew the band in their original era and played a role in their rediscovery. "I was a roadie and sound guy for my friend's band," Schwenk says. "His bass player lived right behind the Death band, and they had a house party together." Through mutual friends, Schwenk formed a bond with David Hackney, though he admits he didn't get to know the other brothers very well. "They'd sit around the living room and play folk guitars, unplugged electric guitars, listen to records. Just drink coffee and smoke weed."

Schwenk has been playing his own genre-defying, psychedelic music since the 1970s, and though he's self-released three albums over the years, he has experienced a lot of rejection — something he and Death have in common. "I actually got to jam with [David Hackney] a couple times; it was a big influence for me," he says. ""My one friend would say, 'Put the guitar down, man! We don't want to hear that.' Then Dave would say, 'Oh no, that's really interesting.'"

In 1975, Schwenk was enlisted to create the artwork for their first release. "[David] was playing us all these recordings on cassette that they were recording at United Sound, and some home recordings. I was getting my degree in commercial art, so he asked if I would do the record cover art. We did an album cover, we did a record label, and also an audio commercial for the radio. He got his 45 made, and they gave me a bag of records and said, 'This is what we'll give you for doing the art.'"

Decades later, Schwenk still had those 45s, and sold copies to the employees of Car City Records in St. Clair Shores, who promptly freaked out. Schwenk had a cassette of more Death recordings, and gave a copy to former Car City employee Ben Blackwell, who wrote a blog post about the band. Meanwhile, Bobby Hackney's son Bobby Jr. heard the single at a party in California and recognized his own father's voice. He quickly found the blog post, and the rest is history. (Schwenk's album artwork was finally used on the III album.)

Another interesting facet of the Death story is that Bobby Jr., along with his brothers and friends, formed a band called Rough Francis to start playing the Death songs before Death itself reformed. Rough Francis opened for Death at their first reunion show in Detroit, at the Magic Stick back in 2009. At the show, Bobby Jr. told the story of how stunned he was to hear his father's voice, which he knew only in a reggae context, on this amazing rock 'n' roll song. Bobby was a skateboarder and had been touring in punk bands for years, all the while unaware of his family's rock 'n' roll past.

Why didn't Bobby tell his children about Death? "They had always seen us as really stellar reggae musicians. They had a lot of respect for us," Bobby says. "Me, Dannis, and David went through so much rejection and pain with Death in that particular episode in our lives. By the time we had moved on, it never really occurred to us. We didn't have tape recorders available to us. It wasn't like any old Sunday I could go get the tapes out and tell my kids to listen to Death. It wasn't something that we wanted to relive, considering what could have been. There was a lot of expectations, a lot of dreams, a lot of hope that was in that. And maybe for me and Dannis, going back at that time would have been a little painful for us."