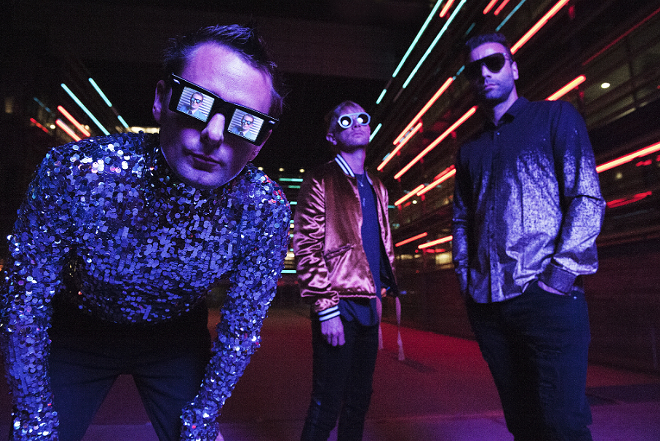 Photo provided by Warner Bros., by Jeff Forney
How .

Copping the moody neon color pallet made popular by Bladerunner 2049, for their eighth studio record Simulation Theory (Warner Bros., Nov.9) Muse dabbles in a cyberpunk world that screams Tron: Legacy pinball rather than soul-searching replicant. This is par for the course, though, when it comes to the long-time tech-obsessed progressive rock band that has implemented everything from rotating stages, large-scale digital pyramids, and space-age spherical drones in their live shows. This time around, it's all about "mixed reality."

Muse announced the "Simulation Theory World Tour" Monday morning which will offer what is being called an "Enhanced Experience Package." The ticket add-on offers a pre-show party powered by Microsoft and invites folks to partake in three Muse-inspired original virtual reality games as well as an interactive photo booth.

The world tour kicks off in Huston, TX on Feb. 22 and will run through Detroit's Little Caesars Arena on April 4 at 7:30 p.m. Tickets go on sale Friday, Nov. 16 at noon and can be purchased here. To learn more about the virtual reality package, click here.