Michael McDonald, the Godfather of yacht rock, is cooler than all of us 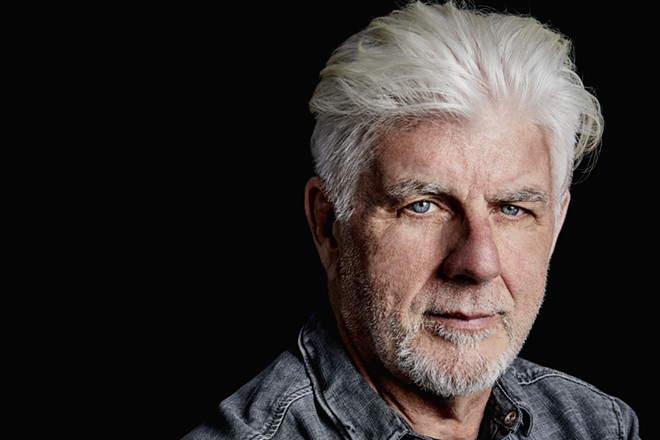 Michael McDonald is 100 percent that dude.

The 67-year-old Grammy Award-winning godfather of yacht rock either genuinely has no idea just how cool he is or he is so aware of how cool he is that he's forced to play it down because that would be the cool thing to do. Regardless, he's just thankful to be around (which is the true testament of his high cool-rating).

“Believe me at my age, I am, if anything, grateful still be up there,” he says of the stage.

In 2019, the silver-haired crooner isn't pushing a new-new record — his latest, 2017's Wide Open, marked the singer's first collection of original songs in 17 years and covers broad musings on sobriety, human nature, and the Constitution of the United States. Though not wildly different than his previous work, Wide Open stands tall against a 45-year-long career spanning hits like “What a Fool Believes,” “Minute By Minute,” and “Takin' It to the Streets.” He admits that he's never been about reinventing himself, instead, staying the course as he fights his own endearingly low-energy inclinations: “I just need to stay awake, more than anything.”

McDonald may be best known for his singular throaty-soul vocalization as much as his longstanding roles as an adjunct member of both the Doobie Brothers and Steely Dan. He is as equally revered as a non-discriminatory master collaborator: among his notable collaborators are Thundercat, Joni Mitchell, Grizzly Bear, Kenny Loggins, Solange, and Aretha Franklin. He told Noisey that he would love to get in the studio with Frank Ocean or Brittany Howard of Alabama Shakes. When did Michael McDonald get so damn cool?

Perhaps this can be explained by an inconsequential albeit subversive moment in the 2005 comedy The 40-Year-Old Virgin, when Paul Rudd's character begins to unravel after being forced to listen to a McDonald live DVD on repeat.

“If I have to hear ‘Yah Mo B There’ one more time I'm going to Yah Mo Burn this place to the ground,” Rudd says, a wall of TVs blasting McDonald behind him.

While Rudd may have been driven to madness, a seed was planted. Soft rock is no longer catering to retired dads. In 2019, soft rock is headlining festivals, and not ironically. (You're welcome, Tame Impala.) McDonald may not be solely responsible for its resurgence any more than, say, this 2005 yacht rock parody web series is, but he's doing a damn fine job as the unlikely poster boy of chill.

McDonald spoke with Metro Times about relevancy, guilty pleasures, and why he thinks the kids are growing hip to soft rock.

Metro Times: You're two years out from Wide Open, which marked your first original album in 17 years. Why such a long gap between original projects, and how do you feel now that this record has had some breathing room?

Michael McDonald: I was kind of surprised how some of the songs held up for us, you know, because the thing about doing an album — I don't want to use this phrase at my age, but I will — you wonder how relevant whatever it is you're writing is. I think that's what took me so long actually. I was kind of trepidatious about what do I really have to say at this point in my life. So I took more time than really probably was necessary.

Also doing those three Motown records. I was busy doing those while I was writing the music for Wide Open. I kind of felt a certain kind of license. I thought, well, I've got these couple of records before I really say anything anyway, so I'll just take my time. Well, for a person like me who's lazy by nature, that's not a good attitude to adopt, you know? So, it took me longer than ever, and then those [Motown] records were done sooner than I thought and suddenly, like five years went by and I went, ‘oh my God.’ That's one of the things I noticed. Five years is like what a year used to be like, you know?

MT: When you're writing your own material and going through your own experiences, it's a little different and more time consuming than putting your own twist on someone else songs. It seems like a vulnerable position to put yourself in.

McDonald: It was very much so. I felt like I was actually being forced to go back to work because, with the Motown stuff, it was more fun than work for me. I mean, those songs I've loved all my life. And to get the opportunity to do those albums was like revisiting my childhood. So then going back in the studio with original material, it's like I was rewriting and writing lyrics at the console while we were mixing the songs and plugging in lines here and there. And so I was in that mood, that kind of stressed out artist mode that I hadn't really experienced in years.


MT: You've also said that you don't fancy yourself a songwriter as much as you do a performer or collaborator. Was approaching Wide Open an intimidating process?

McDonald: It was. I've just kind of come face to face with fears I had kind of escaped for a few years without the responsibility of trying to be a songwriter. I love songwriting and I love the whole aura around songs. But, you know, did I ever really think I was a prolific songwriter? No. I have friends who, if they look out the window, they have a song in her head. I'm not one of those guys. I've worked on songs for years. Like I say some of those songs on this album I probably wrote over the course of eight years and didn't really finish them until we were mixing the record.

MT: Because they were being workshopped over years, have any of these songs taken on a new life for you?

McDonald: They really have. Just as like with songs that I've written, when strangers come up to me saying, 'hey, you know, I love that song, it really came along at a time in my life and it was really relevant,' and when they describe what the song means to them, more times than not, I'm surprised that that, that's what they thought it meant. And it's usually, it's better than what I thought, you know?

MT: That's the key to relevancy, right? It's not as much about being relevant in the pop culture sense as it is appealing to people who need it most.

McDonald: It's what the song means to you. And it means something a little different to everybody and I always try to keep that in mind when I'm writing and not to get too specific my in my style because there are writers who I really admire who write very topically about issues and you can tell this is very much their opinion on this issue and it's profound. Me, I try to tend to stay in the area of just human nature. How people look at things and how they approach all those things in their life usually based on their own fears. But to answer your original question, at this point I'm amazed that after having played some of the stuff live now for a couple of years that, I'm pleased that songs really held up for us.

MT: I've noticed that more young millennials are really into soft rock the past few years. Have you seen a change in your audience? Do you think soft rock is having a moment?

McDonald: Yeah. It's just funny, you know. What we do is not much different than what we were doing in the '70s, but it's kind of come back around to find favor with the younger audience in a way. And that's always fun, you know, 'cause I mean, I felt old in the '80s. So here all these years later to be playing to an audience that seems to appreciate what we do that's obviously quite younger than us, is fun.

And I think that the musicians I work with, first of all, I'm very fortunate to work with these guys they're really world-class players. I feel like we are all of the same minds that we really enjoy playing live and probably we enjoy that still more than any of the rest of the process. We all enjoy recording. We all record in our own ways in our spare time and stuff, but as much as we like that, getting up there and playing in front of a live audience is still the moment that makes it all worthwhile for us.

MT: What does the rest of the year look like for you? Anything you're itching to do?

McDonald: I would like to go back to Europe. I think I'm looking forward to a point where things slow down enough where I can maybe play smaller venues a few nights in a row. And maybe solo. I've kind of got it in my head that I want to go out and do like a one-man show. I'd like to do that with my son to, just him and my wife and I took and if I could talk my daughter into, she's got a beautiful voice. My sisters both sing, too. You know, just tour so that we could actually stay in a city for five days and actually see the place. Europe for us has always been a whirlwind thing.


MT: Your voice is, without question, your instrument. You always seem to be touring or collaborating with someone else who is touring. How do you take care of yourself and your vocals on the road?

McDonald: I don't get too concerned about it, but I'm a lot more careful to get sleep when I'm on the road because I don't want to lose my voice, knock on wood. As it's usually the case, once I get past the first three shows, if I'm, you know, getting rest and I take care of myself, and eat right, my voice gets better. It gets a little stronger with each show. I always hate to quit at the end cause I feel like I'm just kind of getting my stride. When I'm home now I try to stay active a little bit musically and do little gigs around town just so I have an opportunity to sing.

McDonald: By nature I am lazy. I will, you know, watch HGTV for the whole run of shows for that day and then go into the next round.

MT: How many times do we need to see the people on House Hunters complain about paint color?

McDonald: Exactly. I can't seem to get enough of it.