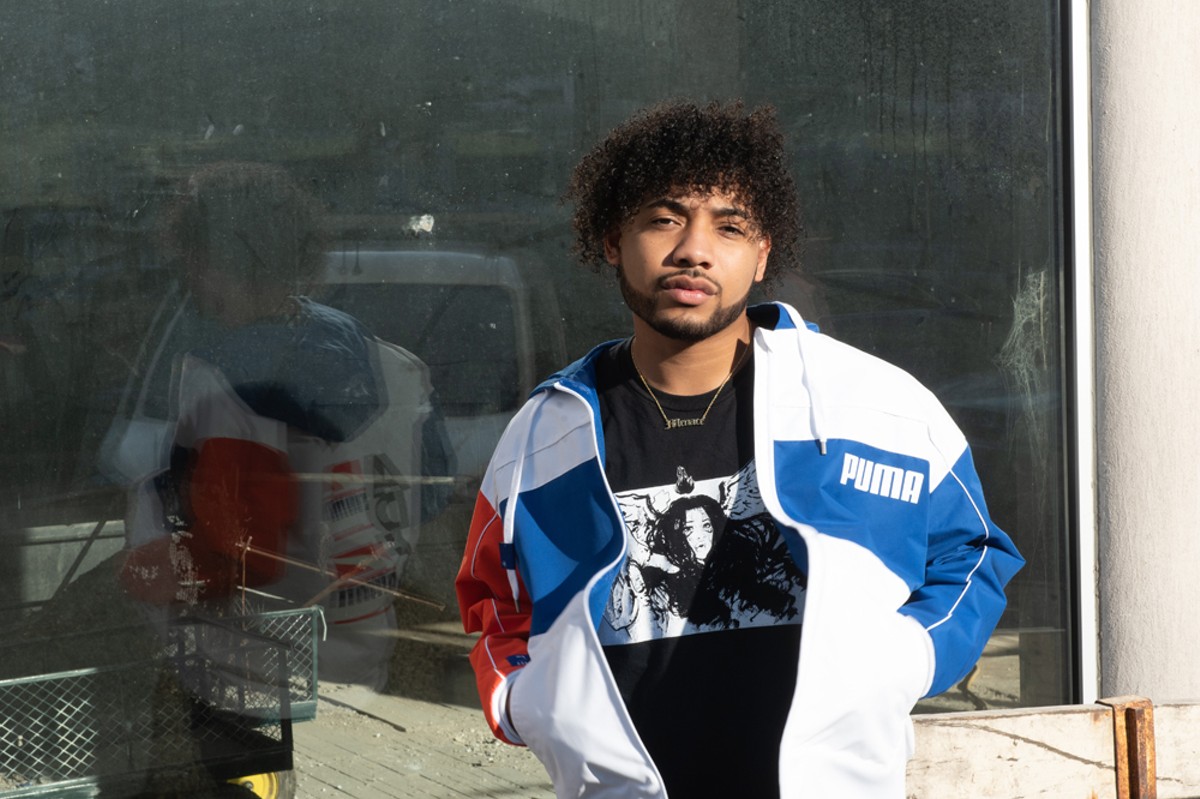 Brenton Freeman, better known as B Free when he's behind the mic, is walking down Washington Boulevard carefree and jovial. The 26-year-old emcee and his team are trading stories from their recent trip to California, where Freeman was able to lock down a product-endorsement deal with headphone maker Beats Electronics.

"Basically I'm a brand ambassador, " he says enthusiastically. The endorsement deal is one of many wins that Freeman has been stacking up like the 1989 Bad Boys. Earlier this summer, he became a brand ambassador for Puma, and he also scored a deal with the Detroit Pistons in which he would do halftime performances, commercials, voiceovers, and other promotional work.

While penning his signature to multiple contracts to represent multibillion-dollar companies is impressive, Freeman is concerned about making top-notch music more than anything else. It's the one thing he's wanted to do since he was a teen at Hamtramck High School, where he graduated in 2013. "I was always rapping in school. I was freestyling at lunch. I was the only kid to have a YouTube video with the words in sync," he says with a laugh.

Like at any high school, there were other aspiring emcees, but Freeman stood out because he took the craft seriously. "I made sure every student had my mixtape — in fact, I was the only one with a mixtape!" he says. "I was also going into the principal's office asking to perform. I was the only one in the school making the effort."

"One day in ninth grade, Berty was like, 'I got this beat.' I heard it and I lost my mind!" Freeman says. "I was like, 'This is what we're going to do. You're going to be the sound. I'm not going to be buying any other beats from other people.' We had geometry together and I told him, 'You make beats, and I'll do the work.'"

Freeman's face lights up as he describes the musical bond with his brother. "Me and Bert live together. Almost every morning, I wake up and I hear beats," he says. "I just go in there and freestyle, come with a cadence, a flow, or a form. Mostly a hook first because that best represents how I'm feeling at that moment, and it's the topic of the song and I add the verses later."

After working the open mic and Bandcamp scenes for a few years, Freeman released his first album, Motor City Menace, in 2018. The album was a combination of lyrical ferocity with Bert's euphonious beats; on some tracks Freeman blasted his haters and on others he sang through his own insecurities.

"I felt like the underdog," he says. "I was doing shows, but I felt like I wasn't getting the credit I deserve. I wanted to drop something that stood out and made people not want to stand still. I was in a darker place ... Motor City Menace was really like an open diary. I was being vulnerable on the project. It was a lot of truth on that project, as well."

Freeman says he taught himself how to sing by watching YouTube videos. "I always wanted to sing," he says. "I heard Childish Gambino do it. If he can do it, I can do it."

Freeman's raspy tenor vocals have drawn comparisons to Drake. But Freeman laughs when the megastar crooner's name is brought up. "It's one of the hardest things to escape right now because I'm light skin, I got a beard, I sing, I rap, and we both have the same tone of voice," he says. "It's one of those things I gotta figure my way through."

Last spring, Freeman showed he had improved his vocals even more on his EP Lost in Paradise, which featured guest spots from Lil Blade and Diggy Simmons. It was lighter, softer, and more romantic than the previous album. "I was feeling good, man," he says, smiling from ear to ear. "It was a brighter tone. I wanted to showcase my versatility more. Like, y'all know I can rap, but what about singing and more melody? I wanted to see people take on that. A lot more females came into play after that."

Moving forward, Freeman has plenty more music planned. He's part of a collective called Forever Golden with fellow emcees Jay Squared, Curtis Roach, and Santana Davinci. The quartet released the Gold EP in 2018 and has more music planned for the future. "We've been friends for years," Freeman says. "We all met at open mics and just became friends."

Freeman plans on dropping more individual singles well into 2020, and he realizes that he's a part of the new generation of Detroit hip-hop artists intent on pushing the culture forward. "I see the city coming up ... we have the opportunity to become the next Atlanta," he says. "I believe we can come together and be one of the capitals of hip-hop."

B Free will perform at halftime during the Detroit Pistons–Indiana Pacers game at Little Caesars Arena on Friday, Dec. 6.