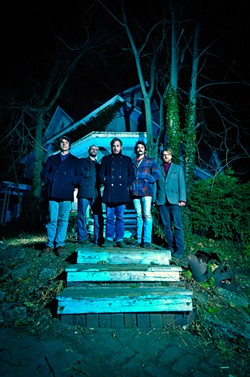 Though he may not play Detroit as much as he’d like to, Frontier Ruckus lead singer-guitarist Matthew Milia is pretty certain the landscape described in the band’s lyrics will seem familiar to anybody in southeastern Michigan. After all, the local quartet spent its whole first album lyrically “mythologizing this entire area,” Milia recalls, “Metro Detroit’s crazy system of connections and mingling worlds … riding the gradient of Woodward.” His evocative lyrics insistently fix upon Michigan minutiae, seemingly clutching some sepia-toned photo album of his life’s major plot-points, mapping the mitten throughout the band’s three full-length albums.

And even if it’s Milia’s intention to survey a large list of Michigan-specific locales, it doesn’t limit the geographic appeal of Frontier Ruckus’ baroque-blended reinventions of road trip-influenced country rock; he says listeners from all over still tell him how well they’re able to relate.

Whether framing his diary-esque montages in obscure settings — from Lansing’s Baker Woodlot or some rest stop in Jackson — Milia says showgoers chatting him on tours far south or way out west still sound like they’re able to “access the same emotional content,” tying whatever melodious Michigan-centric lyric to some place familiar to their own life — or their own memory.

Milia understands. “I live in the past more so than anyone I know,” he says, “and to my own detriment, trust me.” He considers his own memory “cumbersome, weighty.” One telling lyric considers the past as being: “piled and cataloged … stored in some vestigial organ.” Milia’s notion that the entirety of everything and every place he’s known, cherished or hated can exist in his body ignites his musical inspiration.

The 27-year-old English major writes almost every day of his life, saying that it’s “all I know how to do to stay sane.” Songwriting gives him an illusion of control, calming “an internal panic of memory passing futilely or the present tense squandered.”

“I don’t put any constraints on myself when writing, and that makes things more interesting and the scope, then, is greater.”

But the vivid and haunting lyrics are just one facet flourished in the beautiful ballads of Ruckus as an ensemble, enriched by the thrum of bass and a dash of brass (Zachary Nichols), the rustle of intricate rhythms (Ryan Etzcom), and the jangle of a busy banjo (David Jones).

Jones and Milia started Ruckus fresh out of high school, meeting and bonding over music at Detroit Brother Rice in 2002. In the two years following their acclaimed 2008 debut, The Orion Songbook LP, the band toured the United States, making it over to Europe a few times, and releasing a pair of EPs. In 2010, they released Deadmalls and Nightfalls, a follow-up LP as comparably epic as Orion.

They have always eschewed the three-chord glories of garage rockers and leaned more toward the sophistications expected of troubadour-poets, crafting ambitiously theatrical songs with an earthy, eerie, ruminative folk-rock aesthetic. That they got associated with “bluegrass” initially was likely because of Jones’ banjo percolations. There was also that nasally honked, rust belt-accented reediness to Milia’s voice, the warmly fuzzed purr of organs, and the wobbly coo of a singing-saw that inevitably affected a folk or country vibe.

The group’s new album, Eternity of Dimming, Milia says, features artful homages to the “shimmery car pool music that we would listen to on the way to soccer practice.” Dimming distinguishes itself with interesting experimentations in pop-rock, infusing the otherwise august jangle of Americana with major keys and catchier hooks.

The Frontier Ruckus guys also have even more ambitious plans in the offing. This month, they’ll release Dimming as a double album with 20 songs stretching 90 minutes. Milia promises it will be their “most nostalgic record,” nay, “the apotheosis” of said-nostalgia. “[It’s] the most indulgent record I’ll ever write,” Milia confesses, “mythologizing my own memory.”

After they perform the Hill Auditorium this Friday for the Ann Arbor Folk Festival, they head out on tour, including down to the SXSW music festival in Austin, Texas. When they leave to tour Europe again next month, they’ll be assured that Dimming will have reached more overseas audiences thanks to their being cosigned to UK-based Loose Music (home to Deer Tick, Lucero and the like). Michigan and stateside music fans can hear Dimming via Ann Arbor-based Quite Scientific Records.

Milia says the “bare concept” of Dimming’s songs was a juxtaposition of “that super-nostalgic, major-key jangle tone with tragic lyrics. Mixing tragedy with levity, beauty with the terror of memory.”

If you were worried that lyricism had become a lost art in a music world muddled with minimalist bedroom composers of on-the-fly dance-pop, mumbling into Auto-Tunes or reverb-distorted computer mics, then you’ll find solace in the fine craftsmanship of Frontier Ruckus. Yes, there are still bands out there crafting full albums, fleshed out in well-equipped studios; but you can certainly lose yourself, (or, actually, find yourself) in the Eternity of Dimming.