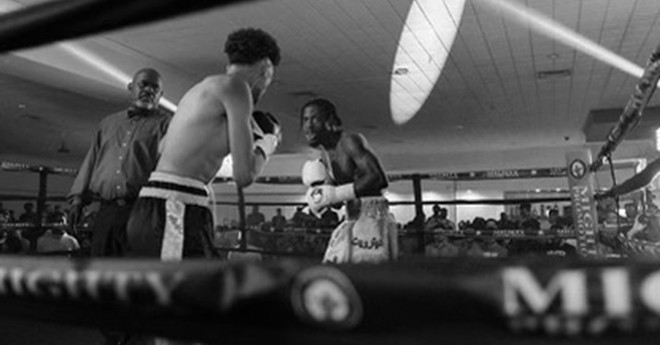 Rapper Snap Dogg made his professional boxing debut Thursday night in front of a packed house at the Bellagio Ballroom in Warren. The 27-year-old featherweight has been a mainstay on Detroit’s hip-hop scene for the last eight years and has been featured on tracks with national recording artists Lil Durk, Snoop Dogg, Lil Baby, Icewear Vezzo, and DC Young Fly.

Snap Dogg stormed the stage through a crowd of cheers as Young Thug’s “With That” blasted through the overhead speakers, squaring off against Yasser Abouleila. The fight was even for the first two rounds until Snap Dogg scored a knockdown in the third round followed by another knockdown in the fourth. Snap Dogg was declared the winner by knockout.

"Man, I came into this fight training hard. My family pushed me. He got me with a couple good shots. But once my coaches told me the dog gotta come out the fucking cage, I let that muthafucka loose!" Snap Dogg boasted to the crowd. "I'm the first rapper to go pro and do this shit."

Snap Dogg then asked the DJ to cue up his hit “WYA,” and he performed the entire song walking off the boxing ring and through the crowd.

There was no comment on who or when he will be boxing next.

Kahn Santori Davison is from Detroit, Michigan. He's a husband and father of four and a self-described, "Kid who loves rap music." He's been featured on Hip-Hop Evolution and Hip-Hop Uncovered. He's also a Cave Canem fellow, author of the poetry book Blaze (Willow Books), a recipient of a 2015 Kresge Literary...
Scroll to read more Music News articles