The critically acclaimed book, first published in hardcover in May 2018, is a brutally honest glimpse of the fading American Dream. It chronicles LeDuff’s journey across the country to explore the lives of people exploited by self-serving politicians, corporate media, and the rich. 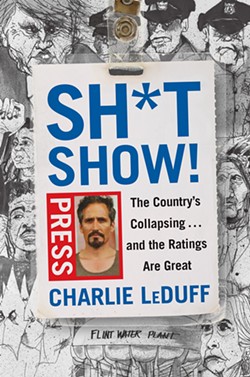 In one chapter, LeDuff flashes his wicked humor and sense of moral outrage while describing a late-afternoon interview with Mike Duggan, who was running for mayor of Detroit at the time. LeDuff suspected Duggan may have planted a fake candidate for mayor to generate media attention and sympathy. After the interview, LeDuff wrote, “It confirmed for me yet again that no matter how you slice the shit sandwich of politics, you’re still eating shit.”

After Duggan won the race, LeDuff met the mayor for a lunch date in an empty restaurant above a bar. LeDuff’s description of the meeting underscores his remarkable eye for detail.

“Duggan appeared wrinkled and beet red, like a man being wheeled through the hospital with chest pain,” LeDuff wrote. “The remaining strands of his hair were poorly combed. His jacket was shabby and unpressed, the necktie frayed at the knot. His left shoelace was untied. There was something artful and cunning in the disheveled manner of his habiliments, I thought. Played down and unremarkable, like his choice of this empty restaurant.”

LeDuff, a newspaper reporter-turned-TV journalist-turned podcast host, also is the author of the best-selling book, Detroit: An American Autopsy.