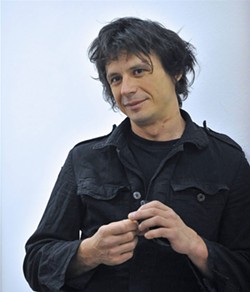 The Czech artist David Černý is many things: Sculptor. Street artist. Airplane pilot. Playboy. Political dissident. Infamously, he was jailed for painting a Soviet tank pink. Since then, he has made a name for himself with his kinetic and thought-provoking sculptural work — such as the giant, mutating bust of Franz Kafka (look it up on YouTube) or a water fountain of two peeing men (they'll spell your name if you text it to them), both located in his native Prague.

How are you today?

It's been fucking cold.

It's like, global warming is not coming. Maybe it's because of Trump...

Yeah, it's a weird day today. What do you think about that in the Czech Republic?

We have actually perfect comparison as the president. The guy who is president here is not a businessman, but he is the same. He is a Putin-lover.

People are saying it's the rise of fascism here in the U.S.

It's obviously very similar. If you look at what's going on in Europe, it's gotten worse. Look at France, look at Dutch. There are a lot of examples.

You got your start as an artist during a time of protest. What was that like? I feel like we're going to see something like that here in the U.S.

[Laughs] Well, it would be cool, but I wouldn't expect anything like that in the States. During Communism, I was 20. So it's been a while. It's completely different. It's completely different, because we were really under a serious Communist dictator — when you can end up in prison whenever they wanted to basically lock you up. Eighties were a bit different. That was when Gorbachev came into power. That was basically the beginning of all changes in East Europe. It's hard to believe now that one guy was able to do it, but in fact it is true. The beginning was when the East Germans began to climb over the German Embassy in Prague. That was the beginning of the Velvet Revolution.

So by the time you painted the tank pink...

That was 1991, one year after the end of Communism.

Did you know that you were creating the work that would define your career?

I wouldn't say that it defined my career. I'm a sculptor. And that was just a joke for one morning.

Well, your work now is very much into being integrated into the environment, and making people think about their environment. In that way, do you feel like what you do now with sculpture and installation may have come from the tank prank?

I mostly work on the street. Even I don't call myself a street artist. But the public space is my playground.

Do you have collaborators?

Of course I do. My parents were both artists. I have a bit of a split brain. On the one side, I am very technically skilled. I have a professional flight license. The second is artistic. So of course I have a lot of collaborators. I know what I want to do. I go to the engineers telling them, "OK, this is the idea," and I have those ideas on how to construct it.

When did you start to take your work in a more kinetic direction?

I don't know how to distinguish traditional or nontraditional. Look at the piece I did, those peeing guys. It's traditional technique of casting bronze on loose wax. It's a technique that has been used for, like, 10,000 years. But then I did the 3-D scanning for making the sculpture, and at that time I employed the GSM technology, which was two years old at that time. So it's really hard to say what is traditional and what is nontraditional. But it is a figurative piece.

When did you get your pilot license? Did you think you would do that as a career?

I was flying as a youngster on a hang glider. Not as a career, but maybe ... to relax. [Laughs.]

Is it very relaxing?

Well, I try to explain that I'm actually having a holiday going to fly because you getting into precise system. You really have to obey a lot of rules, actually. So it's the total opposite of going with your pals to the bar to get fucked up. That's one way of the brain holiday: This one is the opposite. You're running out of the artistic environment, where nothing is exact, back to the precise part of the brain.

It seems like with your art you try to break the rules, or push against the rules.

I never cared about the rules.

I read that you painted the tank pink for a woman. Is that true?

It was a bunch of things, why I did it. Of course, I wanted to piss off the Russians, which happened pretty well. And then, yes, I wanted to screw her, and I succeeded.

Can you tell me about the art that will be in the Dirty Show?

They brought a piece from a private collection in New York. It's called "Eve." It's a piece which consists of sculpture. Have you ever built the Airfix planes? As a kid, I was building those things. So I decided to make a sculpture. It is a sculpture of a friend of mine who lives in New York. She lived at that time in Prague. I made a sculpture of her standing. And then I chopped it and installed it into a frame similar to the Airfix kits. And of course it's blown up, the frame is like 2 meters by 2 meters.

Would you ever create art in Detroit?

I'm open to anything except Moscow. But yes. That would be cool.

Leyland "Lee" DeVito grew up in the suburbs of Detroit, where he read Metro Times religiously due to teenaged-induced boredom. He became a contributing writer for Metro Times in 2009, and Editor in Chief in 2016. In addition to writing, he also supplies occasional illustrations. His writing has been published...
Read More about Lee DeVito
Scroll to read more Lust Issue articles