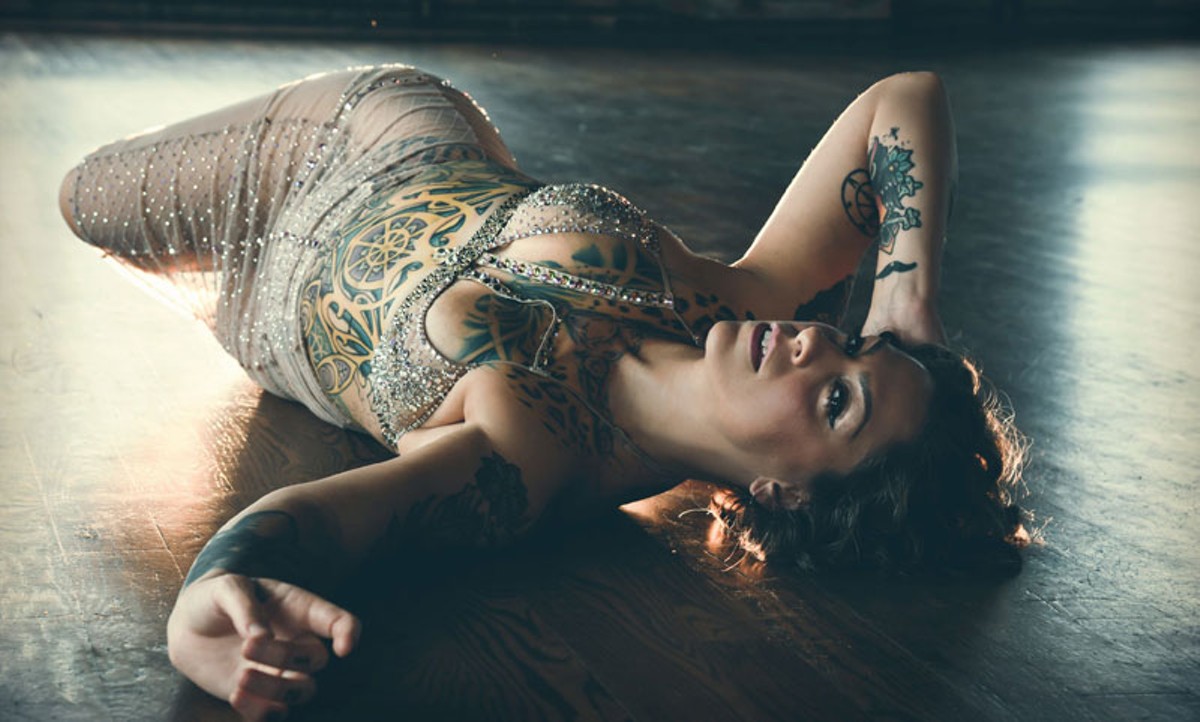 Danielle Colby has picked many things.

The 43-year-old mother, "herstory" advocate, and self-proclaimed "Queen of Rust" has most famously served as the voice of reason on History Channel's American Pickers for nearly a decade. Working alongside collectors Mike Wolfe and Frank Fritz onscreen, Colby manages Wolfe's storefront Antique Archaeology in Le Claire, Iowa — just 15 miles north of her hometown of Davenport and 160 miles west of her Chicago home. And when she's not sending the stars to unassuming garages- and farmhouses-turned-treasure troves across the country, or researching the make, model, price, and origin of a dizzying array of rare finds, she's fawning over sequins, garters, feathers, and nipple pasties. For Colby, the art of burlesque picked her.

"I think the costuming is what first struck me," Colby says. "I eventually was like, 'oh dammit, I have to figure out how to dance if I wear this stuff.' That sort of introduced me to take lessons from some really great performers like LouLou D'vil and Michelle L'amour."

The world of burlesque and politics of the stripper stage have endured many changes since Colby first took to the stage as an 18-year-old "Iowa girl" when she performed an impromptu striptease at a drag show. Burlesque has since shimmied from the fringe spotlight of underground and DIY venues and into the mainstream, enticing a new generation with the promise of self-expression, body positivity, incredible costuming, and the ability to reclaim personal agency. Since her humble debut, Colby has embraced the strength of her stature and developed a stage persona: Dannie Diesel.

"Sexuality is the last thing that's on my mind when I'm on stage," she says.

"What's on my mind, is my core balance, my ability to breathe within a moment," she says. "It takes a lot to just stand and have a moment of pause. You're baring a huge part of yourself, no matter what part of the industry you're in. I have a lot of respect for just your classic stripper, your nightclub stripper, because it takes a huge amount of guts and intuition and courage and fortitude within yourself to be able to go in front of a group of people ... At a strip club there are a lot of things that are thrown at you that are not anything like you would see at a burlesque show."

Outside of American Pickers — which allows her to work two weeks onsite or on the road and two weeks off — she dedicates most of her time to perfecting her own burlesque practice while traveling the world to study its origins and the stories of the many performers who made it possible for dancers like Colby to find their voice.

"It's beautiful to see everything that's finally allowed," she says, "and to see people in this industry being encouraged to push the envelope in multiple different ways and not just in the way that the top 10 performers think it should be pushed, but pushing the envelope in ways that really speak to those people who are just starting to get into this industry."

For Colby's headlining performances at the 20th annual Dirty Show, she says she has prepared several routines, all of which lean into her love of costume-heavy styling and envelope-pushing. She's partnered with a Canadian design house led by Christina Manuge to create a "Burning Down the House"-inspired "fire" costume — complete with flame-colored feathered fans and corseted armpieces — and is revamping her Queen of Hearts costume, which she deems as being her "easy routine." She also has a special 4/20 tribute to commemorate Michigan's recent statewide legalization of recreational marijuana, during which she dons a Statue of Liberty-style weed leaf headdress.

"There's nothing coy or frilly about me," she says of her stage presence and styling. "I'm really fond of strength onstage and I'm not a small person. I'm 5'9" and 190 lbs. — you can't really go on stage and be too shy."

As a master treasure hunter, Colby cites her growing collection of vintage costumes and accessories once worn by burlesque performers, both famous and unknown, as perhaps her most prized possession. She struggles to decide which is more special to her: a rare Mata Hari set, Lillie Langtry's 1890 Parisian costumes, Lili St. Cyr's pasties, or Tempest Storm's earrings (which were gifted to her personally). For Colby, each piece contains a spirit and a story — and pushes her to be better at her craft.

"It's really hard to pick a favorite because they're all like your kids," Colby says. "People are with their costuming every day, and most of these performers perform five days a week. So, when you come in contact with something like that, something somebody has spent so much creative time and energy, that's also quite cathartic because you go through a lot of therapy when you're dancing and when you're sewing."

Burlesque is the axis on which Colby's world tilts and twirls. Recently, her passion led her to Puerto Rico, where she has been juggling her studies of burlesque's Caribbean history and extensive volunteer relief efforts which continue following the destruction of Hurricane Maria in 2017. Colby's schedule allows her to spend weeks at a time there, where she actively works alongside the La Casa De Todos orphanage, local animal shelters, the Boys and Girls Club, and Puerto Rico's Cultural Institute.

In terms of her own history, Colby is focusing on being in the moment. Though she will continue sifting through dust and rust, revisiting the past through her adventures on American Pickers (now in its 20th season) and digging deeper and further in time to connect with her burlesque studies, Colby believes the present time is the most interesting.

"I hear a lot of people say, 'I was born in the wrong era,' 'I would have been burned at the stake in a different era,'" she says. "But I am amazed to see that we are still fighting for human rights."

Colby's love of history gives her perspective. "History teaches me that the dollar rules and whoever writes history writes it however they want," Colby says. "We keep repeating it even though we keep seeing millions of people dying because of it. Trying to balance that in this world is a tough thing. But the little pretty things in between like burlesque are great and they keep my mind focused on the positive. But studying history can sometimes be a very dark thing if you have a heart."