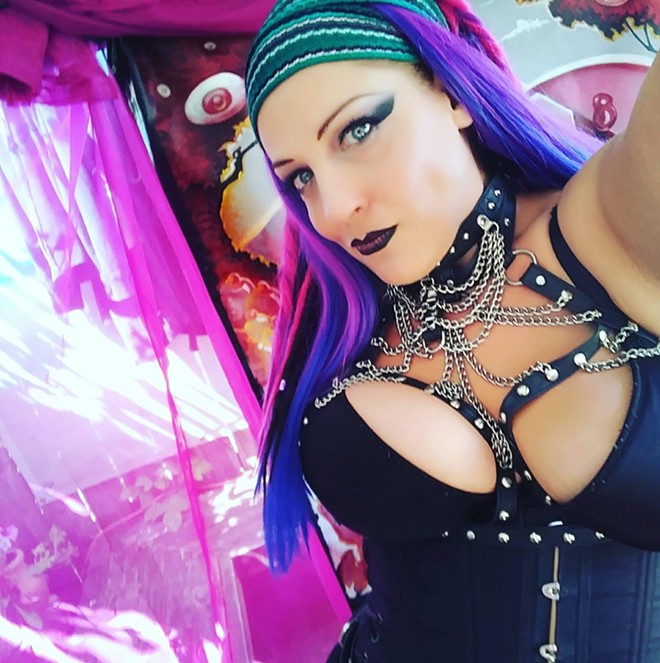 According to the Journal of Sex Research — yes, that’s a legit thing— 41% of men and 27% of women are dissatisfied in their current sexual relationship. So if you find yourself having boring, vanilla sex with your partner (or partners) you’re not alone. Yes, vanilla as in the most basic of all ice cream flavors.

Maybe it’s about time to add some hot fudge and pecans onto that lame vanilla ice cream cone and turn it into a sexy sundae. Not sure where to start? We got you. Well, Castratta Lady Pain’s got you.

If you’ve ever been to The Dirty Show, you’ve probably seen Lady Pain. It’s hard to miss the towering, boisterous woman and her band of dommes beating the shit out of people at the spanking bench. She’s been a fetish model for old-school sex shop Noir Leather in Royal Oak since the ’90s, and she’s now a co-owner. These days she can usually be seen behind the counter giving people kinky advice and sex toy recommendations. She also runs her own BDSM dungeon called Detroit House of Pain, hence the group of fellow dominatrixes. In other words, she knows a lot about sex and pleasure.

We hopped on the phone with Lady Pain to get her five best tips to liven up a boring sex life, so take some notes and try these for your next adult cardio session.

This should be an obvious one. You can’t bake a cake without warming up the oven. And you wouldn’t go for a 300-pound squat at the gym before throwing around some smaller weights first. Why would you jump into sex without getting your partner warmed up first?

The most common form of foreplay is physical whether it’s kissing or touching around the erogenous zones — an area of the body with heightened sensitivity. But foreplay can really be anything like sending naughty texts to your partner before you get home.

“Text your partner something like, ‘I want you naked and on your knees when I walk in the door.’ Start with something simple like that. Once you experiment with the little things, it’ll be easier,” Castratta recommends.

She emphasizes that sex isn’t solely about having an orgasm and that you should take it slow and enjoy all the moments that lead up to the climax.

“It’s kinda like yoga — being present in the moment. Don’t worry about where you’re going, just take your time. When you get to the destination you’ll enjoy it more.”

OK, so we all know that certain foods like oysters and chocolate are aphrodisiacs that help get you in the mood. But that’s not what we’re talking about here. We’re talking about spraying Reddi-Wip on your nipples and having your partner lick it off. And it doesn’t have to be limited to nipples, any erogenous zone will work here whether it’s the inside of the thigh, neck, or you know… the more obvious spots. Or just feed each other ice cream in a bubble bath. That works too.

“Honey is a really good food to play with because it’s anti-bacterial, but you also have to suck really hard to get it off,” Castratta says.

Just be careful about application around the vagina, because certain foods can throw off a woman’s pH balance, and that is no fun, trust us.

This is important in all facets of relationships, but especially when it comes to sex. Your partner is not a mind-reader and can’t feel the sensation that you do (or don’t). How are they going to know you’re dissatisfied if you don’t tell them? Instead of laying there during sex thinking “what tf are they doing,” Castratta recommends using dirty talk to tell your partner what you want without criticizing them.

Her voice gets seductive as if she were having phone sex with us right then and there. “You can tell them, ‘Oh, faster,’ or, ‘Do it like this.’ That way you’re not gonna tear down their self-esteem during the middle of it,” she says. “You’re guiding them. I constantly direct my partners and they like it. It’s very sexy for them to hear.”

She also recommends asking each other questions casually, before sex, like, “If you could do anything you want to me, what would you do?” This way there’s no pressure to do anything or perform in that moment, although it could be enough of a turn-on to lead to sex.

1. The booty is your oyster

“You have more nerve endings in your butthole than you do any other part of your body, including the clitoris,” she says.

For women, having their partner stimulate them anally can intensify a normal orgasm. Castratta recommends women have their partner use a vibrating butt plug on them during sex to make things more enjoyable.

Men have the extra benefit of a magic little button called the prostate, which can be stimulated through the rectum. “The prostate gland is what manufactures the baby batter,” Castratta explains. “Even if a guy is completely flaccid, you can make him have an orgasm without even touching the penis.”

“You can like your butthole played with and there’s nothing gay about it unless you want another man to do it,” she says.

For those who aren’t convinced, prostate massages can help prevent prostate cancer, and butt sex also helps you poop better.

After living in Japan and traveling across Asia, Randiah Camille Green realized Detroit will always be home. And when she says Detroit, she's talking about the hood, not the suburbs. She has bylines in Planet Detroit News , Bridge Detroit , BLAC magazine, and Model D . Her favorite pastimes are meditating...
Read More about Randiah Camille Green
Scroll to read more Lust Issue articles