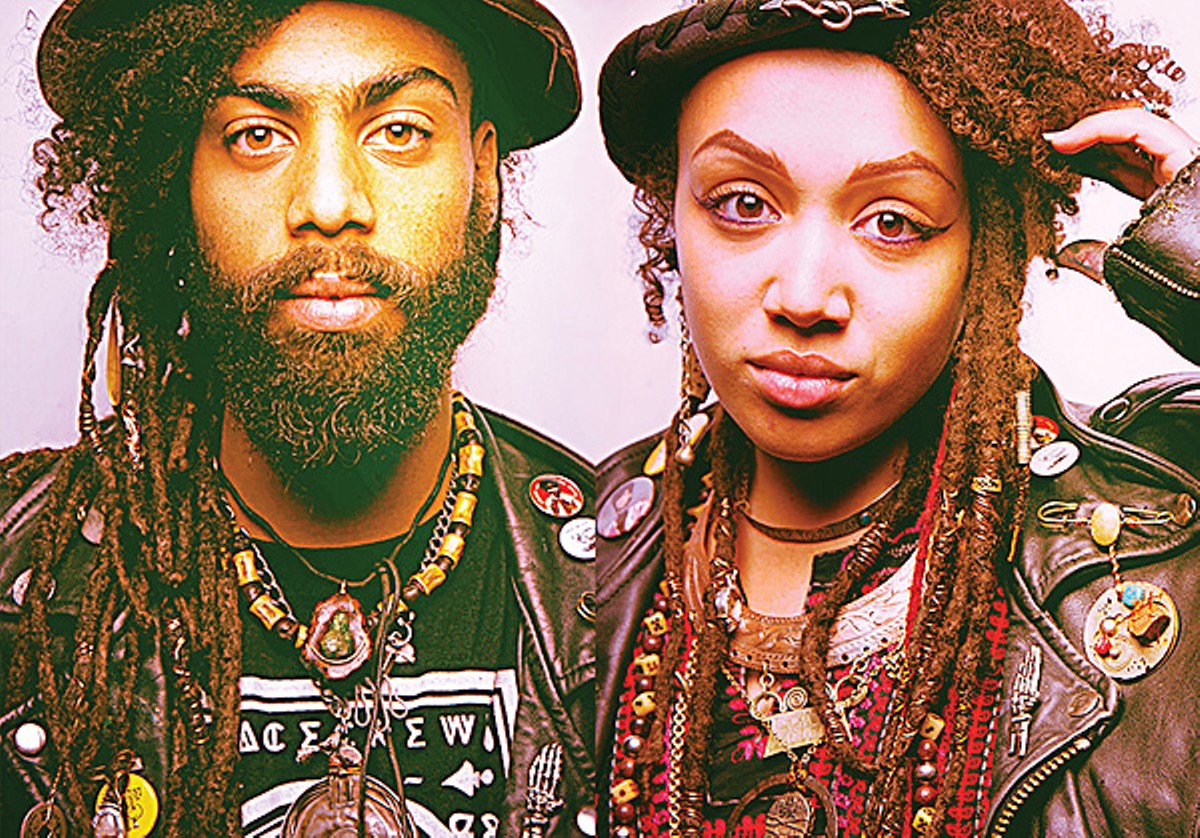 Aubrey and Elena Smyth (aka Motu and Kozma). Eric Perry

When Aubrey and Elena Smyth work together, they're not just a married couple who both create art — they're a singular artist. As Armageddon Beachparty, the duo are a fixture at local music festivals, easily spotted by their "super-gypsy" aesthetic.

We meet the two over coffee, and find them decked out in similar leather biker jackets, adorned with found-object jewelry (made by them), and finishing each other's sentences. "It comes really naturally to us," says Elena (whose alias in Armageddon Beachparty is "Kozma," short for "cosmonaut" — Aubrey is "Motu, for "Master of the Universe.") She describes their process as "organic," and says they often work without a solid plan. Even as they sit here at Great Lakes Coffee, it can be hard to tell where Elena ends and Aubrey begins. They say even their closest friends have a hard time telling exactly who did what in each painting.

Their artwork draws on a variety of influences, ranging from pop art to surrealism to tribal imagery. Aubrey says that together, their work is stronger than it would be individually. "We both have our own weaknesses," he says. "We fill in each other's gaps."

Married for a over a year, the two have been working as self-employed artists for two years. They say they decided to try being full-time artists after working various day jobs (Elena as a corporate graphic designer and for a while as the Detroit Mercantile Co.'s sole store employee; Aubrey in the food industry and doing "very depressing" work for a call center). The two lived in Midtown for a while (Elena is a College for Creative Studies graduate), but now live in Southwest Detroit after searching for cheaper rent.

They began to find a niche for themselves by doing live painting at musical events — between two and five times a week. Things took off from there, and they took their show on the road last summer. "We have something called our 'Shaman Stick,' a walking stick that we take on the road with us," Aubrey says. "After every show we do, we take our wristbands off and tie it to it. At this point we've probably got 500 or 600 on there."

Elena rejects the idea that the live painting is merely a gimmick or a spectacle. "It exposes our work to an entirely different demographic," she says. It's opened a lot of doors — the Electric Forest curatorial team recently reached out to invite them to participate in this summer's festival. It also enables them to reach people who wouldn't normally be considered part of the art scene. "It's just a way to bring the art to the public eye," she says.

Aubrey adds that the atmosphere at a music event influences their art too. "We get a vibe people that you wouldn't get in a studio," he says.

Elena says they consider themselves to be "Detroit's ambassadors of psychedelia." "We want to do the psychedelic realm justice," she says, noting "psychedelia" has become "kind of a played-out '70s thing." That sounds like a lofty goal, but they knew they were doing something right when Laura, wife of the late psychedelic poster artist Gary Grimshaw, gave them props.

When asked about their weird moniker, Elena says it's a reference to the perpetual state of impending doom that the modern era seems to be in, with a new apocalypse entering the popular culture every few years. In recent memory alone there's been the 2012 Mayan calendar, the 2011 Rapture, June 6, 2006, and Y2K.

That's why you won't find any store-bought canvases at their shows — the two use only reclaimed materials for their paintings and jewelry as their way of saving the environment. Plus, since they both worked at the Recycle Here! recycling center in Detroit, they get dibs on any treasures that turn up there.

"Our culture is obsessed with the end of the world, so we might as well make the best of it while we're here," Aubrey says. He points to his hand. "I want my next tattoo to say 'T.R.E.A.M.,'" he says. "'Trash Rules Everything Around Me.'"