Things to Do
Nature

These freaky-looking rocks are among the many on display this weekend, along with crystals, minerals, fossils, jewelry, and more 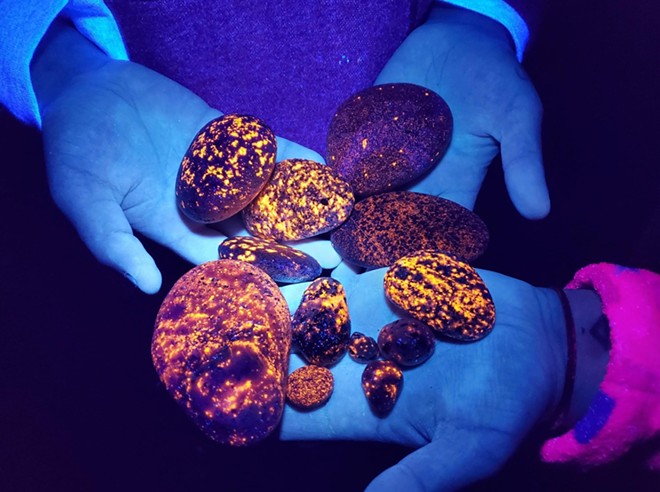 Courtesy photo
"Fluorescent sodalite-bearing syenite" is a mouthful, but these glowing rocks from the U.P. are also known as Yooperlite.

The 77th Greater Detroit Gem, Mineral & Fossil Show is this weekend, and one of the rocks taking the spotlight is called Yooperlite.

They look like regular old rocks to the naked eye, but under UV light they glow like some kind of freaky space rock burning inside with lava. Rintamaki dubbed them “Yooperlites” because he’s a Yooper (someone from the U.P., obviously). The rocks are found in Michigan’s Upper Peninsula, specifically along the coast of Lake Superior. Technically it’s fluorescent sodalite-bearing syenite, but that’s a mouthful, so Yooperlite it is.

Rintamaki will be at the gem and mineral show at Macomb Community College in Warren Oct. 7-9 with tons of the stuff. The gem show will also have nearly 70 vendors selling crystals, minerals, authentic fossils, jewelry, and more.

Dave Lurie, president of the Michigan mineralogical society, says there will be more hands-on activities this year. The event was canceled in 2020 and had fewer interactive exhibits last year due to COVID-19.

This year, visitors can get up close and personal with the minerals, observe them under a microscope, dig for fossils, and fill up $1 grab bags with as many gemstones as they can. There will also be wire wrapping jewelry demonstrations and door prizes.

“What draws people in is the beauty of nature,” Lurie tells us. “It’s the fascination with having a mineral formed millions of years ago that’s perfect in shape and beautiful in color. Kids especially tend to like fossils a lot because they’re 300 or 400 million years old, and just the idea of something being that old right in front of you is fascinating.”

Even if you’re not the type to get excited by fossils or understands the healing properties of crystals, Lurie says the gem and mineral show is a fun educational outing for families.

“We’ve also been giving out a scholarship to a geology student who’s a senior at Wayne State [University] in the geology program and we’re very excited about that because it’s giving back to the city,” he adds.

The first 250 attendees each day will get a free quartz crystal, so get there early.