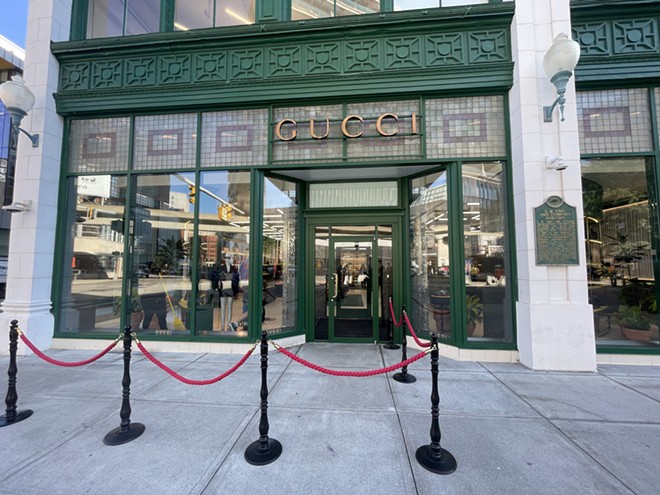 Last month Metro Times reported on a photo of a homeless man sleeping in front of the future downtown Detroit Gucci store going viral on Facebook. It prompted a tone-deaf response from an apparently unofficial Gucci Detroit Twitter account about potential robberies and beefed-up security. A spokesperson for the real Gucci then contacted Metro Times directly to tell us the account was not authentic and they later had it deleted.

Now it seems the dust has settled as Gucci Detroit has its soft opening on Friday, Aug. 19 at 1274 Library St.

Detroit poet jessica Care moore tells Metro Times she was commissioned by Gucci to write a poem for the store called “We Wear the Working Day” inspired by the city’s contributions to fashion. A stanza from the piece was painted on the side of the Siren Hotel, a block down from Gucci Detroit as part of the shop’s opening. She posted a sneak peek of the mural on Instagram Wednesday.

“We (Detroit) are the flyest of the fly when it comes to clothes,” the poet tells us. “We are trendsetters. People look at us, how we dress, how we wear our minks to the ground and our gators and they copy us.”

While others may be skeptical of the luxury brand coming to Detroit, Care moore says the brand’s community partners actually want to invest in the city.

“Any outsider that opens a store in Detroit, I give them the side eye, but I love the community engagement,” she says. “It’s definitely not about the brand. They want to invest in the city, otherwise, I wouldn’t do it. And I would like more stores to actually be in Detroit. Detroit is a fashionable ass city and we deserve fly-ass designer stores.” 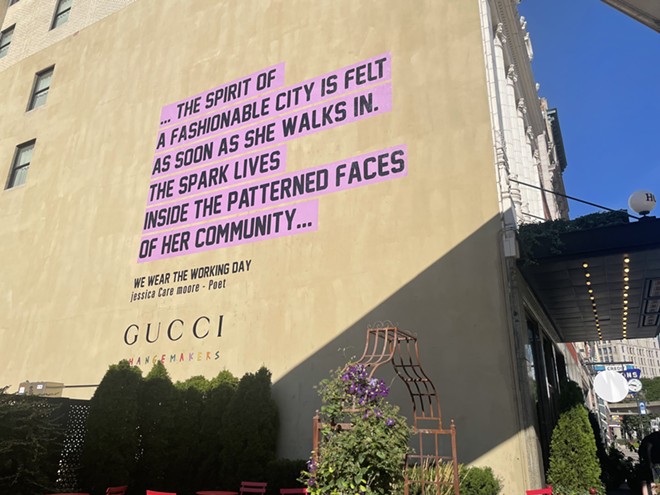 Randiah Camille Green
jessica Care moore's poem on the side of Siren Hotel, a block away from the Gucci store.

We dig that Gucci is recognizing Detroit’s cultural contributions and partnering with local creatives. The brand previously collaborated with Tommey Walker, founder of clothing brand Detroit Vs. Everybody for a limited run of T-shirts that benefited local non-profits.

But there's still a part of us that can't stop thinking about that viral photo — a painfully clear metaphor for the city's gentrification with those seen as less valuable being pushed out in favor of high-end shops that do not serve them.

Does the average Detroiter really care about Gucci, or are they more concerned with rising housing costs and flooding basements?

The homeless man in the Detroit Gucci doorway may have found another place to sleep, but we cannot pretend his juxtaposition doesn’t echo the struggle between New Detroit and longtime residents to coexist in this tired downtown "comeback" story.