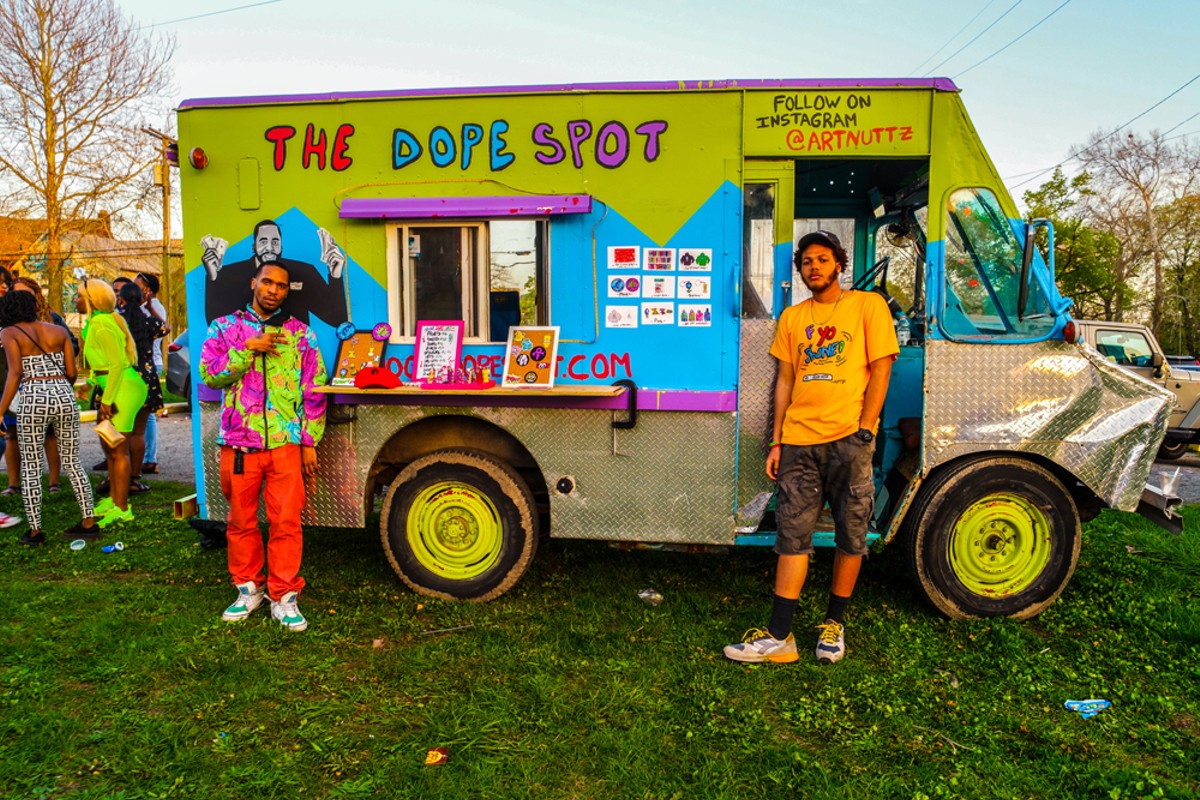 Thomas "Nutty" Ingram III is creating a different type of art in Detroit.

Inspired by the city he grew up in, the 28-year-old describes his style as "supervillain art" because it "goes against the grain" of some normal artistic conventions. His clothing brand Shoot Dope Spot is an example of his style, where he sells tie-dyed and neon-colored shirts that say subversive messages like "I went to Detroit got this shirt and didn't get shot" and "Buy art then drugs."

Others are emblazoned with characters, like a trenchcoat-wearing figure with the phrase "Secret Hustlin Society," or "Fuck ya flowers" (a cartoon anthropomorphic flower holding up two middle fingers.)

Ingram says his art reflects his experiences and personality. In school, Ingram always liked to draw, but had art teachers tell him he needed to do things in certain ways. He attended Redford High School, which didn't have a film or art program, and closed while he was a student there in 2007. As a result, he was sent to a different school that had a film and media studies class, but didn't allow transfer students to participate in the program.

So Ingram says he started filming fight videos, because they were happening around him. He says he would take the footage and edit it on his computer, adding effects and sounds to make them more unique to his style.

"Then [the school] tried to expel me for it, but I had good grades and shit and some teachers were like, 'Yo, he should be in this class,'" Ingram says.

He says once he had some equipment, he started making movies in his free time and learned how impactful movies were. After high school, Ingram went to a film and media arts college in Wisconsin before moving back to Detroit.

"It gave me a good toolbox of skills to add to, but I already had some tools myself," he says.

Then, three years ago, Ingram bought an old truck, which he repurposed into a moving clothing store and marketing tool. It also allowed him to expand Shoot Dope Spot.

"This shit is moving street art," he says.

He says buying the truck was a big move for his company, because it's hard to miss. The truck is painted in bright neon colors with a portrait of ex-Detroit Mayor Kwame Kilpatrick holding handfuls of money on the side of the truck.

Most days, you can find the neon "Dope Spot" truck driving around the city selling merchandise outside of bars, skateparks, and art galleries.

"This is what we do, this is our life — going to skateparks, building on it," he says. "It just so happens it's trendy and cool now."

He and his network of fellow artists are constantly having "marketplaces": a pop-up style shop with exclusive designs and discounted prices on clothes, stickers, lighters, and other merchandise. Last weekend Ingram had a booth at the Michigan Glass Project, a three-day art fundraiser to raise money for art programs in Detroit Public Schools. He says having art accessible to kids in school is an important way for youth to express themselves.

But Ingram says his true passion is filmmaking. His film company is called FreshFlix.TV, and he says his next move is getting the cast finalized for his upcoming movie. Once the filming is finished, he plans on editing and releasing it as soon as possible.

Ingram says the clothing line takes up a lot of time, but it allows him to make money to pay for expensive camera equipment and to compensate actors. He's also an author and illustrator, publishing How to Survive Detroit: A Hoodrats Guide to Making It in the City in 2016.

More information can be found at shootdopespot.com.