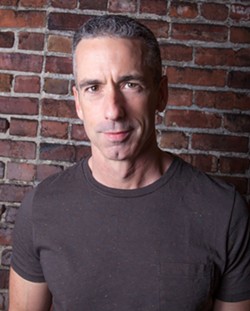 On Sunday, he'll bring the live version of his column, Savage Love Live, to the Royal Oak Music Theatre. We spoke with Savage by phone to learn about why he's not resting on his laurels, how his column has changed in the internet era, and what to expect this weekend.

Metro Times: This Savage Love Live show was rescheduled from October. What happened?

Dan Savage: Oh god, I don't even remember. There was some sort of conflict. I smoke way too much pot to remember what was going on six months ago.

MT: In a lot of ways, the country is a far more sex-positive place than when you first starting writing. But is there anything you see these days that concerns you?

MT: But public opinion about things like sex and gay rights is way more liberal than those of the people in power. It could just be the dying gasp of the patriarchy.

Savage: We want to call it a dying gasp to make ourselves feel better, but our constitution, the electoral college — these are tremendously anti-democratic institutions that tilt everything in favor of that paranoid, conservative, white, reactionary demographic that isn't the majority but is easily gaming the system to ensure that they can rule as a minority. You see that with voter suppression efforts like voter roll purges, voter ID requirements, closing of polling stations in poor neighborhoods and African-American neighborhoods and college towns. You just see the system being gamed everywhere to extend its life. And now with Trump's policy on immigration, we see this desperate effort to de-brown the country, or to slow it down or reverse it. And it's really scary. We can't just say time is on our side. We're sort of, bit by bit, hurtling toward — I wouldn't say apartheid, but a South African minority rule kakistocracy. And every day I wake up in a white hot panic about it.

MT: In a recent column a reader said you stopped being fun. In response you said you'd try and "sunny things up a bit over the next few weeks."

Savage: I've been getting that feedback for 27 years — literally the entire time I've been doing the column. People say, "I read you for sex, I don't read you for politics. Leave politics alone." My response has always been that I will leave politics alone when politicians leave sex alone. You can't write about sex in this country and ignore politics. The rights of queer people, trans people, women's reproductive freedom and choices — they're obsessed with sex, and coming for it constantly. We can't just tootle along pretending like they're not interested in us.

MT: And they're so hypocritical. You've made it a sport on your podcast of charting vehemently anti-homosexual Republican politicians who seemingly always inevitability get caught in some gay sex scandal themselves.

Savage: I had the singular delight this last week of opening my podcast with three stories of conservative, anti-gay, anti-women politicians who were caught knocking up a staff member, patronizing prostitutes, and tying up a female sex partner and extorting her and threatening her with blackmail to keep her silent. It was a real delight to have three of these in a row where none of them were secretly homosexuals.

MT: It's weird too because some of this stuff doesn't even seem to register as a scandal anymore. Like Stormy Daniels...

Savage: If Barack Obama had paid for a porn star's silence in clear violation of campaign finance laws the week before the 2008 or 2012 election, he would have been impeached before he could have pulled his pants up. The Republican party puts party over country, is intensely hypocritical and authoritarian, and will do anything it can to protect Donald Trump. They have no shame. They can't be called on it, because they don't care. Catching someone in a lie is only effective if someone has the capacity to feel shame. I guess when you join the Republican party and sign on the dotted line they wheel you into a surgery and lobotomize you and remove that part of your brain that allows you to feel shame.

‘I could write a butt plug column with a hangover in half an hour. But boy, when it’s situational ethics... those aren’t easy to write!’

MT: How has the column changed since you first started writing it?

Savage: Twenty-seven years ago, there was no internet and there was no Google. So if someone overheard someone talking about a butt plug, they would write to me and say, "What is that?" And I would explain that in a column. I would get letters from people in like, Dallas, Texas, and someone would write in asking if I knew if there were any swingers clubs in Dallas, Texas. And I did, because I had these obscure swingers publications as reference materials. So I would then write the column and put the P.O. box — like, "Here's your local swingers club, local conservative Texan swingers." And now, every swingers club in the country has a website, and you just have to look it up on Google. So I don't have to give referrals anymore. And butt plugs, fist-fucking, deepthroating — all these things have Wikipedia pages and I don't need to do explainers for those anymore.

All the questions I get now are situational ethics: "I did this, my partner did that. Who's the asshole?" Those questions are so much harder to answer! I feel like Solomon cutting the baby in half all day long. It's exhausting. I used to drink more than I drink now. I hardly drink now because pot's legal, but I could write a butt plug column with a hangover in half an hour. But boy, when it's situational ethics... those aren't easy to write! The column got a lot harder.

MT: But you're qualified to answer those questions — you must have fielded thousands of them by this point.

MT: Are there any times you can remember being wrong?

Savage: Um, I put the clitoris in the wrong place the first time I mentioned it. That was a big one. I think certainly on issues of gender — I think we've all been on a steep learning curve about gender and trans issues over the last three decades, and that was a dialogue that played out in my column and was an education for me.

But in the online outrage wars, there's no tolerance for that. It used to be you wrote a column and it was on the street for a week and disappeared. If somebody wanted to reference that column you had to go to the library's archives and find it. But now everything exists online as if it was published two seconds ago. You can pull up a column from 22 years ago, and it gets passed around as if that is where you're at right now. There is a little bit of dishonest old opinion-mongering which goes around online. Which is hilarious, because the people who do that sort of thing, one of their demands is, "Fuck you, listen, do better." And then you listen and do better and people are still like, "Fuck you."

MT: After 27 years, do any reader questions shock you?

Savage: It's hard to shock me after 27 years, but every once in a while someone can. It's usually not the mechanics of a particular sex act that I find shocking. It's usually people's capacity to deceive themselves or lie to themselves — their inability to smell their own shit and see what they've done wrong. And you know, I say that that shocks me, but we're all prone to that. It's hard to smell your own shit. I'm guilty of that too. But I'm sometimes flabbergasted by how dense and clueless we can be.

MT: Well, the worm thing grossed me out a few weeks ago.

Savage: Yeah, gore, vore. I had one reader write in saying she fantasized about murdering her boyfriend and eating his organs. That's a little traumatizing for me. Jeffrey Dahmer did precisely that to a friend of mine — I lived in Wisconsin at the time. So I just can't tap into what's sexy about that.

But that's what's so crazy about human sexuality. You just can't predict it. There are people who have latex bathing cap fetishes. And often when sex researchers try to find what inspired it, someone will have been taking swimming lessons and they saw these women in these latex bathing caps, and not men, so it was gendered and interesting and weird... but that's just one of the boys that was in that swim class. The other 13 boys who were in that swim class may not have made that sexual link. So it's not like you can strip the world of things you can latch onto because you just can't predict who's going to latch onto what. And it's fucking fascinating.

MT: After answering all of these reader questions over the years, what would you say you've learned about human sexuality?

Savage: When it comes to human sexuality, variance is the norm. I think more people get that now. Every other letter I used to get used to end with, "Is this normal?" People would lay out some bananas sexual interest and then end with a demand that I assure them that this is normal. No, it's not normal to want to dress up as the Queen of England and get peed on. But there was a recent study where researchers determined that most people have a paraphilia, or a fetish. So that means non-normative sexual desire is normal. We all have to wrap our heads around that.

And I'll get letters, like a person will do the right thing and lay their kink cards on the table early in the dating process. It's a kink that someone can indulge in, like a foot fetish or something, and people will run screaming from this person. Well, almost everybody has something and at least they were telling you the truth. I always like to say if you break up with the honest foot fetishist, you will marry the dishonest necrophiliac.

MT: What can fans expect from Savage Love Live?

Savage: What's fun about a live show is it is possible to stump me, and then with the audience we work through an answer together and figure it out. I've always said the column is a conversation. Back before there were comment threads on websites that published the column, I would run a lot of feedback from readers in the column. But now that whole conversation takes place in the comment threads. It's really a permeable format. It was sort of the internet and blogging before there was the internet and blogging. And readers would chime in with their own opinions. It's a conversation — it's not me coming down from the mountaintops with the tablets with the instructions from God about how to use a butt plug.