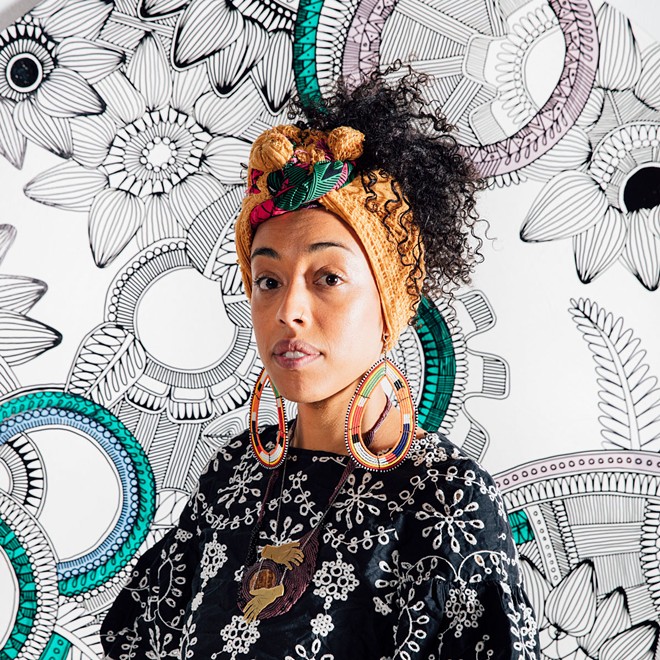 This feature highlights a different local artist each week. Got someone in mind you think deserves the spotlight? Hit us up at [email protected].

Artist of the week: Olivia Guterson

Olivia Guterson once described her artwork, which features geometric shapes forming flowers and plants, as a meditative practice.

The repeating patterns loop, swirl, and zigzag seemingly endlessly, creating ornamental designs. Follow the markings with your eyes and you’ll get lost in a sea of repetition like a stream of consciousness where the thoughts blur and the mind eventually becomes silent.

This is meditation in its purest essence: an attempt to observe the thoughts before you rather than silence them.

Guterson is a Detroit-based multidisciplinary artist and mother. Her work is done primarily in ink, giving it a black-and-white palette with the occasional streak of color appearing as a faint pop of red, yellow, or blue. She draws on symbols from ancestral traditions within her multicultural background — her mother is African American and her father is Ukrainian Russian Jewish.

The work is a place where her heritage is celebrated and intertwined as the lines intersect with one another to forge a new pattern, one that is uniquely Guterson, who also goes by Midnight Olive.

She has collaborated with fellow Jewish artist based out of metro Detroit Laura Earle at Womxnhouse Detroit 2021 on an installation “Ha Aron Imotaynu (The Ark of Our Mothers)” that saw her intricate patterns carved into an ornamental comb and encased in a wooden box with the hamsa motif and more of the artist’s delicate symbols. Guterson continues to define and redefine her style as she continues to emerge, though her patterns creating sprawling ecosystems of plant life remain a striking feature. Some of her newer works appear darker and even more abstract in black ink on black backgrounds caked with oil that could swallow you into its depths.

Perhaps it’s a meditation on duality as dark and light coalesce on both canvas and the physical world.

Where to see her work: Oliva Guterson will be featured in the upcoming 18 exhibition of abstract art interpreting the mysticism of the number 18. It’s on from Jan. 15 to March 1 at the Janice Charach Gallery, 6600 W. Maple W. Bloomfield. More info is at charachgallery.org.