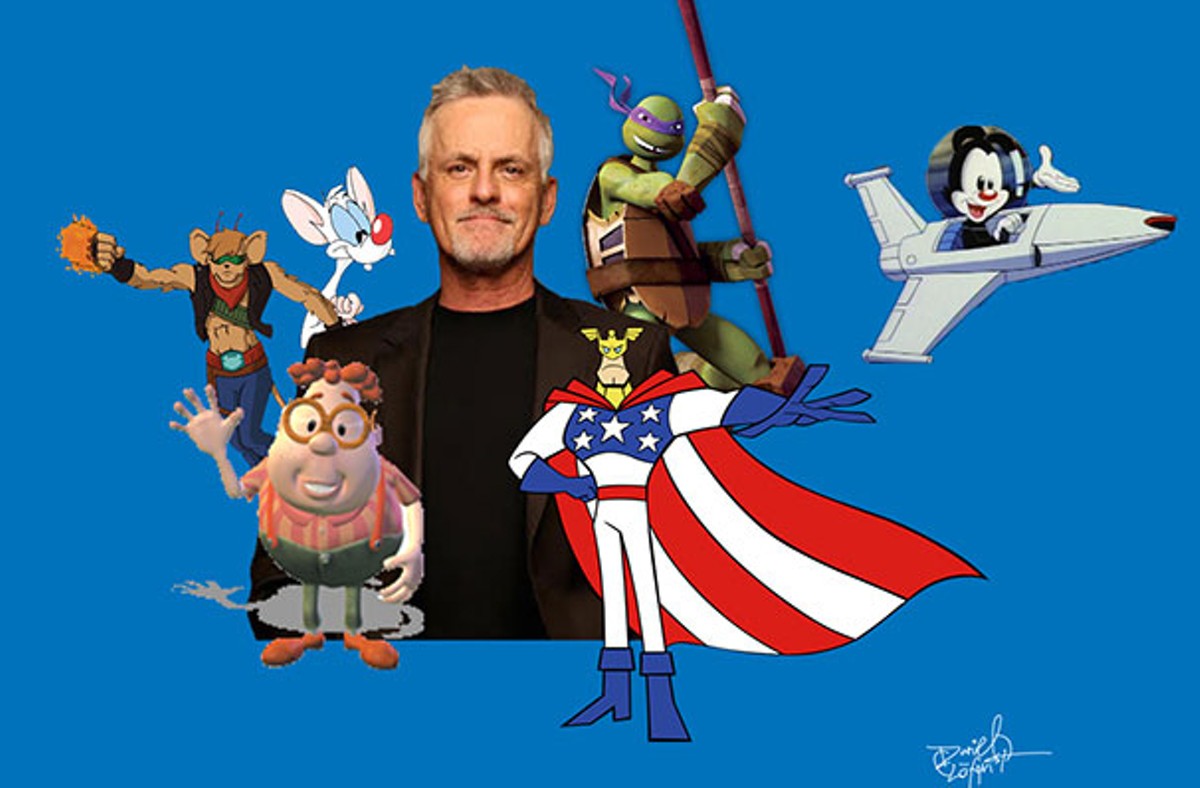 You might not recognize his name or even his face, but odds are if you're a certain age, Rob Paulsen is the sound of your childhood. As one of the leading voice-over talents of the last four decades, the Detroit-born Paulsen has voiced hundreds of familiar toons, beloved by generations of fans. His IMDb page is as dense and epic as a George R. R. Martin novel: Gummi Bears, The Smurfs, Yakko Warner from Animaniacs, both Raphael and Donatello on the original Teenage Mutant Ninja Turtles, Pinky of Pinky and the Brain, Rick and Morty, Mickey Mouse Clubhouse, Doc Mcstuffins, and countless more.

Paulsen grew up in Livonia, Rochester, and Grand Blanc before setting off for Hollywood in the late '70s, where he earned a reputation as one of the most versatile and in-demand vocal performers in the industry. Now he's coming back to town to meet and greet with the masses at the Motor City Comic Con.

MT: You are Detroit-born, as are voice over artists like Billy West (Ren and Stimpy, Futurama) and Dave Coullier, and the great Daws Butler (Yogi Bear) was from Toledo. What is it about this area that produces so many funny people?

Rob Paulsen: Man, there's just something in that water, the Great Lakes. Maybe it was fumes from the Cuyahoga River before it caught fire. I honestly don't know, but I'm telling you there's something palpable about people from that part of the world — a resilience, a toughness, and the ability to make fun of anything.

MT: It's probably something about it snowing 50 days in a row. So what were you influenced by growing up? Were you a big radio nerd?

Paulsen: I was more of a TV guy. I wasn't a big DJ fan, but I listened to Dick Purtan, and WRIF, WKNR Keener 13, CKLW's Byron McGregor, and all those guys. Those big heavy duty newsmen: "It's CKLW 20/20 News!" They all were these boss jock guys that just beat you over the head with their voices, you know? But the inspirational folks for my character development, I cut my teeth on Carroll Burnett, Lucy, Jonathon Winters, Monty Python, The Goon Show. Peter Sellers is one of my all-time heroes. All those folks were huge influences on me, like they were for many people my age. So when I came to L.A. I had a lot of chops down in different dialects and stuff, not because I was planning to use them, but because they made me laugh and made my soul happy.

MT: Did you ever intend to get into animation?

Paulsen: At first I was a comic and actor, and I did a bunch of on-camera stuff, but most of all I was a singer. I started singing in character; I would create characters and sing, then I fronted a bunch of rock 'n' roll bands, and my hero in that regard was Alice Cooper...

Paulsen: Yeah, and I've gotten to know Alice recently because we do all these giant conventions together. At these huge shows I get all these people that come out to see me because they're fans of Pinky and the Brain or Ninja Turtles or whatever, and it's just lovely.

MT: Your first animated series work was on G.I. Joe as the immortal "Snow Job."

Paulsen: Yeah man, Snow Job. Hah good for you. He was the arctic expert. Then I did another minor character called Tripwire, and since the same company was doing Transformers I did two characters, Air Raid and, and what was the name of the other guy...

MT: They're all robots.

Paulsen: Yeah, yeah, I can't tell them apart. Those were the first gigs I did and through those shows I started working with these incredible guys like Frank Welker (Freddy on Scooby Doo) and Peter Cullen (Optimus Prime) and Mel Blanc, and I thought, "Holy shit! This is the gig man. I'm 28 and nobody cares what I look like. It doesn't matter that I'm just another average looking kid from the Midwest. I'm getting hired for things that I wouldn't necessarily be considered for on camera." Then I started working at Hanna Barbera, and off we go.

MT: So you went the standard route, and then pivoted?

Paulsen: When I first got out to California, I was working quite a bit on camera actually, doing commercials and small parts, episodic television and radio ads, then the opportunity to audition for animation came and I said, "Yeah," because I just wanted to work. Little did I know that my preparation in being a rock 'n' roll singer with a classical background who could read music and loved comedy would pay off. I started getting more and more gigs, and it turned out there were fewer people that could sing in character, so I started replacing celebrity talent that couldn't sing, so I would do it for them.

Paulsen: Yes it is, and now I'm doing these Animaniacs Live shows all around the country with my partner Randy Rogell who was the composer that wrote all those really bitchin' songs you guys probably remember. I would love to bring it here do it with the Detroit Symphony Orchestra, maybe at Meadowbrook. It would be a gas.

MT: And the cartoon is coming back, right!

Paulsen: The audience now is exponentially larger than when we launched the show, for obvious reasons. We have the children of people that were in high school and college and loved Pinky and the Brain and Animaniacs and now they watch it, so Mr. Spielberg has decided we're going to do 26 new half-hours of the show for Hulu in 2020.

MT: It must feel cool that you're still making new fans.

Paulsen: Now I get to travel around the country doing all these conventions that have become ubiquitous, they're springing up like zits on a 12-year-old. It's great everywhere I go, but now I get to come back to Detroit, where Gordie Howe was my hero, and I still eat, sleep, and breathe the Lions, Tigers, and Red Wings. I guarantee I will meet probably 500 people whom I will sign autographs for at that event, and I will leave exhausted from saying thank you. And the joy that those characters have brought — I don't write them and I don't draw them. I'm just the actor, but I'm the lucky one that gets to be the front man for that love. It's mind-blowing. You're talking to a lottery winner, my friend.

Motor City Comic Con takes place Friday, May 18 through Sunday, May 20 at the Suburban Collection Showplace, 46100 Grand River Ave., Novi; 248-426-8059; motorcitycomiccon.com; Tickets are $25 for a Friday adult day pass, $40 for Saturday, and $30 for Sunday; weekend passes are $75. Tickets for children are $10 for Friday or Saturday, $20 for the weekend. Kids 5 and under get in free. More information about Rob Paulsen is available at robpaulsenlive.com.