‘Star Wars and the Power of Costume’ goes behind the scenes of that galaxy far, far away 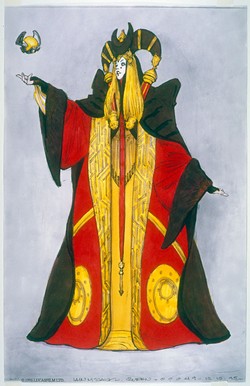 As the massive twin banners hanging on the front of the Detroit Institute of Arts have been warning for the past few weeks, Star Wars is coming to the art museum, with Star Wars and the Power of Costume set to open this weekend. But what exactly are Luke Skywalker, Darth Vader, some droids, and a Wookie doing in an art museum?

"One of the DIA's recent focus points has been to be as inclusive and inviting to the general public as possible," DIA curator of film Elliot Wilhelm says. "When you take a look at the front of the DIA's building, it says 'Arts' with an 's' on it."

And those "Arts," Wilhelm says, have long included the museum's 1200-seat Detroit Film Theatre, which has been showing film since 1927. "It actually predated the Museum of Modern Art in New York showing film as an art form by about three months," he says. "So focusing on various aspects of film seems natural for the museum."

As Wilhelm explains, the exhibition should have a wide appeal beyond just superfans of George Lucas' tale of a galaxy far, far away. By focusing on the costumes featured in the series (the exhibition includes characters starting with Lucas' original 1977 film and running through 2015's The Force Awakens) the exhibition is not about the film series per se but rather about a specific aspect of filmmaking and storytelling: the art of theatrical costume-making.

"What this exhibition is really about is the specific act of creation in terms of making motion pictures," Wilhelm says. "Costumes are conceived of, fabricated, chosen, and used for a film in order to connote a certain kind of rapport with the audience, to give us a kind shorthand about what a character and who a character is, based on some degree on our knowledge of the history of motion pictures."

Beyond just telling the saga of the Skywalker clan, the Star Wars films function on another level by creating a pastiche of classic cinematic references and recontextualizing them as a space opera. Across his trilogies, Lucas draws from sword-and-sandal fantasies, Westerns, war films, and more — gleefully tossing all of the ingredients into an intergalactic blender and turning it on. By invoking a smorgasbord of cinematic styles and archetypes, Lucas created an alien world that was also instantly recognizable to audiences — and filled it with a cast of characters who were thus instantly relatable.

The exhibition also functions as a show about design and problem-solving, or how an idea goes from pencil sketch to reality. The exhibition features original works on paper from Lucasfilm concept artists shown alongside the final costumes as used in the film, so the viewer can see how the final characters differ from the initial concepts. For example, R2-D2's early concept art featured the droid's now-classic cylindrical shape, but instead of legs the character was originally intended to roll around using a giant ball bearing. Lucas and company soon realized they lacked the technology to make such a character come to life onscreen, and the idea of a rolling droid was scrapped in favor of R2's tripod design. (The concept of a rolling droid would later be revived in the character BB-8 in The Force Awakens.)

In all, the exhibition features more than 60 costumes. The DIA's stop is the last on the traveling show's North American run, and Wilhelm says the museum has tweaked the presentation of the show to localize it. For example, in interpreting the design of Darth Vader's imposing armor, the DIA refers to the samurai helmet from its own collection as an example to show the influence Lucas' artists drew from. "There's a great deal from art history and movie history that Lucas drew on and we wanted to show those connections," Wilhelm says.

On that note, during the months of June, July, and August, the DFT will be screening a variety of films that Lucas and scholars have cited as influences on Star Wars. Those include Fritz Lang's Metropolis, Akira Kurosawa's The Hidden Fortress, and more.

At its core, Wilhelm thinks the exhibition makes for a fun summer show.

"Yes, there is academic richness, and there is this marvelous revelation of how the creative process in a motion picture works. But it's also fun," Wilhelm says. "I think there are antiquated ideas from a long time ago in a galaxy far, far away that going to a museum is not fun — it's supposed to be good for you, like eating vegetables. It's not true. You can learn things and also have an extraordinary time."