One man’s trash is another woman’s art 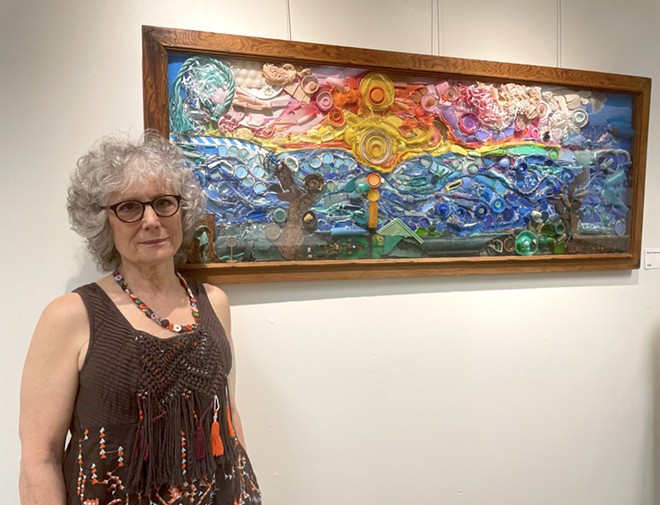 Thousands of balloons, plastic straws, and shotgun shells have washed up on the shore of Lake Michigan near Deborah Hecht’s vacation home. The amount of trash was so disturbing that Hecht decided to make a statement by doing what she does best — making art with things once discarded.

The garbage became part of the Michigan artist’s “Beach Trash” collection, which is part of her latest exhibit Waste Not Want Not. It’s up at Woods Gallery in Huntington Woods until Aug. 31.

Everything from tampon applicators to broken children’s toys and bottle caps that had washed ashore are meticulously arranged into detailed abstract works. Even the frames are found objects utilizing shutters, old window frames, and other recycled wood.

“Found object art” may dredge up images of elementary school craft projects, but Hecht uses the discarded items to compose delicate works that vibrate like the art of Vincent van Gogh. From far enough away, her pieces “Something’s Fishy” and “Beach Trash Sunset” could pass for paintings — but there’s no paint here, just a broken glass and plastic twilight.

Hecht collected all the trash from a stretch of beach north of Sleeping Bear Dunes starting in 2016. As the garbage washed up, she would gather and clean it, separating it by color, shape, or type. Then she glued each piece together, even incorporating some sand from the beach.

She says the most surprising thing she would find on the beach (besides the tampon applicators) were balloons.

“I go up north every summer, usually for about two months, but walking the beach, I found so many balloons, it was weird,” she says. “It just makes you wonder, like, what’s the party? And why wasn’t I invited?”

Her piece, “The Beach of Lost Balloons,” encases those pesky balloons in a window frame with a poem she wrote printed on it.

“Have you lost your balloon? I know where it is. Come to the beach and help me… clean it up,” the poem reads.

“People never really think of balloons as pollution,” she says. “I make art with it because that’s what I do. I don’t know what else to do, but I want to mostly bring awareness for people to be more cautious.”

Waste Not Want Not also features work outside the “Beach Trash” series made from objects Hecht has collected over the years. Fractured ceramic plates and cups, corn cob holders, and pieces of a broken French press come together to make a mosaic in “Lunch is Served.”

A collection of keys, rulers, and her grandmother’s buttons are arranged to form Art Deco-esque patterns in Hecht’s piece, “Scheherazade.” The items come from literally anywhere and everywhere — yard sales, estate sales, garbage dumpsters, and even Hecht’s personal items that she keeps when they break.

“I trash pick some, but I just go to yard sales or estate sales and I go into the basement and find the things that nobody wants,” she says.

Pointing to the broken cups plastered together in “Lunch is Served,” she adds, “My daughter-in-law ordered coffee cups for everybody and they came [in the mail] broken. So that’s what those are. Sometimes I have to trim something to make it fit, but I don’t break anything on purpose. I just save it.”

Her Oak Park studio is filled with boxes of random objects, broken glass, and items most people would no longer consider valuable. It’s recycling to the max, down to the fragmented sign outside that reads “Things” which she salvaged from the previous owner's shop “Rainier Shoes-N-Things.” The space serves as half-studio and half-store where Hecht sells antiques along with her art.

“Recycling and not wasting anything has always been a big issue for me,” she says. “My son just turned 38, but when he was in first grade they asked everybody to write something about their mother and he wrote ‘my mother hates waste.’ So, I’ve always liked to reuse things.”

Hecht started her found object abstraction style in 2015, though she got her BFA from Wayne State in painting back in 1974. Throughout her lengthy career, she’s used a variety of mediums from oil paint, watercolor, mixed media sculpture, and clay tiles that she makes by hand.

While her painting days are mostly behind her, Hecht still incorporates her clay tiles in her work. A pair of mixed media sculptures at Waste Not Want Not called “HomeBodies — Couple” is a husband and wife Hecht constructed out of random parts and her own handmade tile faces.

A golf ball and a walnut shell on a keyring hang below the male sculpture’s waist, obviously symbolizing… well, you know what.

“So he has a ball and a nut, and I actually found that that way,” she says with a laugh.

You could look at Hecht’s work for hours, endlessly noticing new details.

“Look, it’s the guy who stormed the capital,” a gallery patron says, pointing out a toy soldier wearing a horned fur hat and holding a gun that’s tucked in the corner of one of Hecht’s pieces. The plastic toy does resemble the Jan. 6 QAnon rioter who called himself a shaman. Too bad nobody threw him out with the trash.

Woods Gallery is located in the lower level of Huntington Woods Library at 26415 Scotia Rd., Huntington Woods. The exhibit is open during library hours, 10 a.m.-9 p.m. Monday-Thursday; and 10 a.m. to 5 p.m. Fridays. Entry is free.