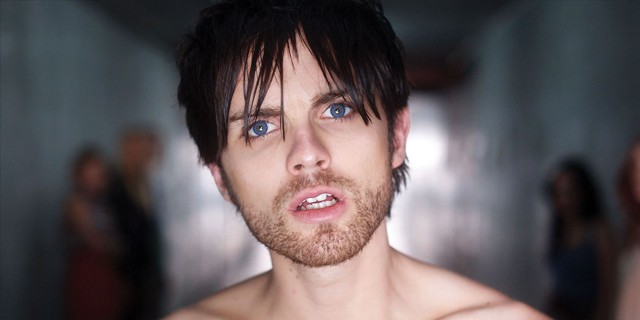 Kaboom: Thomas Dekker gets more ass than a toilet seat.

Like a club kid alarmed to find a gray hair in his goatee, Gregg Araki has been hanging around the darkened back wall of the indie film-fest circuit, nervously shifting his weight and hoping nobody notices he's still there. He's been making variations on the same theme since the late '80s: hot young hipsters with interesting haircuts have a whole mess of gender-neutral sex partners while some random element of supernatural ultraviolence looms over them. He gained some buzz, and not all positive, and a cult following for 1995's The Doom Generation, mostly for the scene of Rose McGowan's floatation devices in a bathtub, then failed to get attention film after film. Occasional side-trips — such as the somber Mysterious Skin or the Anna Faris weed-cupcake comedy Smiley Faces — hardly fared better, so Ararki has returned to the formula for Kaboom.

Thomas Dekker plays Smith, a sexually "undeclared" goth college party boy with ice-blue eyes and impeccable stubble who screws his way through life like a Roman courtesan on a bender. He's got a serous, unrequited crush on his hetero surfer-hunk roomie, and is caught up in a sort of love quadrangle with a trio of women who keep popping up in his dreams. One such is an actual witch, with, like, real Sabrina-style powers and stuff, and there's much nonsense about an evil cult and men in animal masks in between all the loving shots of tits and ass. Kaboom rolls at an amiably silly pace, and then ends with a literal bang that'd be tragic if we gave a damn.