Juggalos confuse Coca-Cola for Faygo in taste test challenge, making us question our own reality 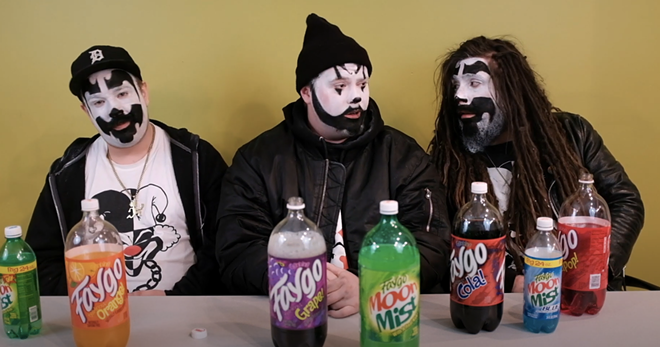 It might be a hot minute until we can bathe again in a fountain of Faygo, the sticky, carbonated — and Detroit-created — nectar of the gods, aka hip-hop clowns Insane Clown Posse. That's right: due to the coronavirus pandemic, ICP's annual blowout, Hallowicked, has been scaled down to a livestreamed, acoustic show this year. (And, let's be real, Juggalo makeup and masks are a really rough combination.)

The station selected three Juggalos for WDET's "Faygo Taste Test Challenge," in which they would not only be tasked with drinking way too much soda in one sitting but would also be confronted with the eternal Socratic quandary: Who am I?

Like a trio of face-painted Frasier Cranes, the Juggalos sniffed, sipped, and swirled 15 disposable cups of bubbly with the same attention to detail as if they were trying to decide between a 1945 bottle of Domaine de la Romanée-Conti and a Richebourg Grand Cru circa 1985.

Before launching into the taste test, Juggalos Zak, Wicked Faygo Clownboy 420, and Stretchnutz took a moment to debunk common misconceptions that Juggalos are a gang and are considered to be stupid — or worse, “stupid and in a gang.”

The taste test started out pretty rough considering both Zak and Stretchnutz incorrectly identified Coca-Cola as Faygo Cola, a cardinal sin in the Juggalo world. But Wicked Faygo Clownboy 420, a self-described "Faygo connoisseur," identified it correctly.

Things picked up as all three nailed round two, where they were confronted with red varieties of soda, a flavor that dates back 110 years, including Big Red, Ruby Red Squirt, and Faygo's popular Redpop.

After suffering an existential crisis following his failure to identify Faygo Cola in round one, upon his first sip of cup number three, Zak's soul had realigned itself.

Up next, orange flavors. While Stretchnutz is not a huge fan of Faygo's more commonplace varieties, he had no problem identifying Faygo Orange among a lineup that also included Sunkist and Orange Crush. But Zak, who ranks orange as second-favorite in his personal pantheon of pop flavors, failed to nail this one, along with Wicked Faygo Clownboy 420, who thought Sunkist was the true Faygo Orange.

Wicked Faygo Clownboy 420's preferred flavor, Grape, was up next, and served as a victory for the Juggalos. Stretchnutz, who claims to have been drinking Faygo since the ripe age of 7, even guessed correctly based on appearance and bubble patterns alone before ever bringing it to his lips.

For the finale, Faygo's Moon Mist entered the ring, paired against Mello Yello and Mountain Dew, which Zak says “tastes like video games.”

In the end, only one Juggalo came out on top, and it should come as no surprise as the word Faygo is literally in his name, er, AOL screen name: Wicked Faygo Clownboy 420.

You can watch the clip below: