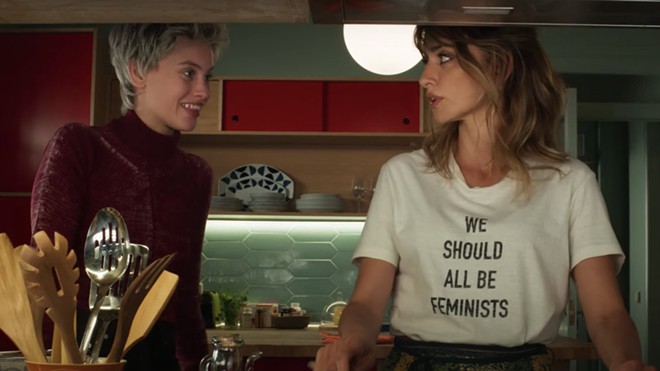 Whether doing more meditative, inward-facing work like Pain and Glory or plying his more familiar trade of melodrama, Pedro Almodóvar’s playful, questing, mode of filmmaking never feels unwelcome. His newest, Parallel Mothers, falls basically in the latter space of romantic melodrama, making much of grand feelings which bleed through the boundaries between the public and private, personal and national, historically minded and forward-looking. While operating finely as a tangled story of present-day emotional strife, it re-frames its story with acts of blunt imposition and association, inviting viewers to emotionally connect the barely stitched-together spaces in which it works. Phone calls, doorbells, and surprise meetings precipitate swerves and revelations in its jaggedly extended narrative structure. But Almodóvar’s style itself here makes for such a parade of emotional experience and visual pleasure that these unsubtle signs of workmanship are hardly noticeable, much less disruptive to what’s felt in watching.

Parallel opens with Janis Martinez (Penélope Cruz), an almost-40 Madrid-based editorial photographer hailing from a line of single mothers who is pausing from her quite chic, contemporary work to look into past familial tragedy. Seeking to fulfill the wishes of her few living ancestors, she inquires into exhuming and properly burying the missing bodies of long-lost patriarchs (part of the brutal legacy of fascist Spain), providing solace to relatives and other survivors. After she enlists the help of Arturo (Israel Elejalde), a married archaeological researcher she’s happened to photograph for work, the two form a swift, engrossing romantic connection: one which soon leaves her pregnant. Within the maternity ward (which the movie cuts to swiftly after their meeting), she meets Ana (Milena Smit), a young expectant mother far less happy with her lot, and one who doesn’t know the identity of her baby’s father. The two form a sincere, if passing connection there before parting ways to raise their daughters.

From then, the film’s historical events are relegated largely to the background, making way for the more pressing work of Janis’s navigating life as a working single mother to Cecilia, her newborn child. Corralling a spacey, lightly negligent au pair, hiring new help, seeking a sitter, and sparse, occasional meetings with Arturo become Janis’ chief non-professional preoccupations. Almodóvar suggests much about her life quite minimally, often cutting months forward or back with breezy confidence, signaling the passage of time with little comment: shifts in wardrobe or a child’s visible signs of growth are enough to do the job. Working in bright, saturated tones (as ever) and often framing characters’ faces against a just-shaded field of solid gold or red, Almodóvar lends a largeness to these daily dramas before disrupting them with sharp, decisive intrusions of the plot. When urgent questions arise regarding Cecilia, Almodóvar lends as much charge to Janis’s tensed hand resting on a mouse (itself atop a plush, velveteen red pad) as he does any of the film’s scenes of argument or love-making: a testament to his affinity for high drama, for portraiture, and to his roving, playful eye. Underscoring scenes of online browsing with Alberto Iglesias’s ecstatic, mounting score, the film does what melodramas ought to but often take flak for: paying tribute to the emotional grandeur of the inevitable, daily events of our lives.

But these same sorts of happenings become muddled and complicated by personal connections — nothing in Parallel’s world of mothers passes without some sort of narrative counterpoint or foil. In keeping with this, Janis and Ana re-convene, and their lives become tangled in a lattice of similar but different experiences of motherhood and loss. If melodramas have historically been a female-centered, basically matriarchal space, Almodóvar basically squares the genre’s predilection by embracing a second leading mother navigating intersecting and contrasting troubles of her own. Ana’s younger, poorer, less experienced, and defiant in ways quite different from Janis, who’s intent on defending all she’s worked for and maintains fidelity to tradition that re-colors her independent, self-possessed air. Between the two women, a charge of shared experience and a plain power dynamic persists, with the roles they play in each other’s lives shifting with the flow of convenience both narrative and personal as much as emotional need.

As the film presses on, markers and memories of tragedy and death seem to spring up and surround the two leads, both of whom push dauntlessly ahead from day to day. With a less magical, more realist (if grandly so) tone and a more harried pace about it than Almodóvar and Cruz’s 2006 collaboration Volver, Parallel Mothers never gives up its address to Spanish history and politics alongside its inquiries into more intimate forms of loss. As with Janis’s both personal and political history of familial tragedy, the pains inflicted in one’s experience span arenas of life; the names of those the dead who’ve passed seem to have carved their names into the walls of each onscreen woman’s world. Yet Almodóvar makes little space for either’s grieving, counting on these personal and historical specters to come home to roost by the story’s end — as, at 72, he’s surely accustomed to them doing on their own.

In this and many other manners, Parallel Mothers is as assured as it is unfussy, driven by some propulsive, fast-moving energy that barely leaves space to breathe and take in its implications about history or life. This hurried quality will likely be for many a barrier to taking in the film’s full depths, given the ease with which anyone can drink in its abundant surface pleasures. But for those who wish to dive a little deeper, there’s a more considered and circumspect vision at work here, particularly through how it suggests a sense of emotional continuity across different parts of history and life. Beneath the sparkling pyrotechnics of its largely harmonious, occasionally dueling madonnas and romantic turmoil, there’s space (however brief) for fine-tuned observation and reflection on its characters’ making their way through life’s swiftly moving waters. If Parallel seems not to pause and reflect often enough, it mirrors in this the ways in which we so often never get to — while pressing a case for doing so all the same.