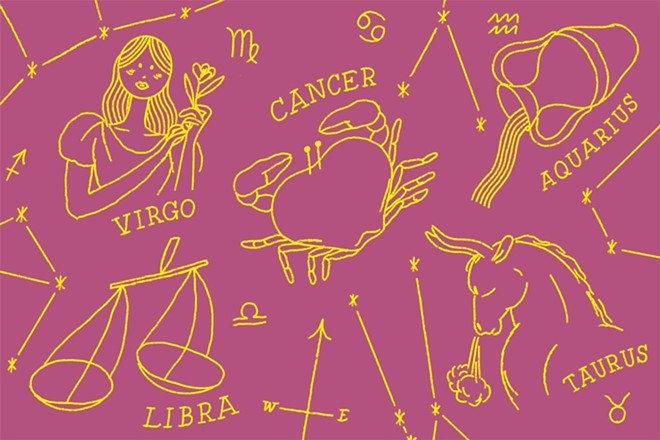 ARIES | March 21 – April 20: Some things are easier said than done. With more than your share of obstacles on tap, you know that you've got to buck up and deal with them, but the energy isn't there for it. In some cases, you're totally devastated. Getting around the hard stuff is tricky. Like everything else, it takes time. In your current situation, the surface issues keep your mind going around in circles, when in fact there are a lot of old, unresolved conflicts nipping at your heels. The solution lies in your willingness to see what you don't want to see. Before you can see the light, you have to make the darkness conscious.

TAURUS | April 21 – May 20: If you've finally put two-and-two together, you're beginning to see that you can mix the chaos of your ordinary life with whatever your spiritual aspirations involve; the two are not separate. No matter what we're doing, the divine occupies the space between each breath. This realization has changed everything for you and for those closest to you. As you continue to introduce what's in your heart into everything you do, the atmosphere ignites and inspires others to rise to the occasion. Wait and see what happens next. When heaven and earth collide, life starts to make sense.

GEMINI | May 21 – June 20: It'll be interesting to see how recent changes pan out. It looks to me like the odds are in your favor with regard to work, your health, and your relationships. Who knew? What up until now has been hard to read has shifted in ways that no one could've predicted. You guys are said to be the beneficiaries of "coyote medicine." Coyote is often referred to as "the trickster." This energy endows you with the ability to turn on a dime and be far enough ahead of the game to play it with not just five, but all six senses. Congratulations! Yet again, you've played your cards right!

CANCER | June 21 – July 20: Other people and their issues weigh upon you. It could be that you're either too dependent, or too co-dependent. In some cases, you're having a hard time "letting go." No matter what form things take, all of this sucks your energy and takes away from your ability to stay focused, and/or to keep your show on the road. I understand that part of you needs people, or perhaps, "needs to be needed," but there comes a point when it's time to buck up, reclaim your energy, and do what needs to be done for you for a change. You'd do well to pull yourself together and cut the cord.

LEO | July 21 – August 20: This is where things either turn around or they don't. Everything depends on whether you have the courage to take the road less traveled, or if you need to stick to the rules. If it were me, I would pull out all the stops and buck the system because something new could be just what the doctor ordered. Yes, it will require more faith, and people will tell you you're nuts, but who cares? At this point, the tried-and-true route is for sissies, and you've got too much to lose. More than one thing needs to change — in your outer reality, and inwardly, as well. It may even be time to move.

VIRGO | August 21 – Sept. 20: You've got so many things all figured out. On the surface, life couldn't be better. The gap between your outer world and what's going on inside is huge. If you're aware of this or understand it intellectually, the desire to get to the bottom of the deep stuff is huge. In fact, many of you are driven to have it all figured out immediately. Time and experience are the only teachers here. If the good Lord himself fell out of the sky and lifted the veil on all of your issues, it would kill you. Slowly but surely is the key. The inner and outer realities converge one step at a time.

LIBRA | Sept. 21 – Oct. 20: What goes around comes around. The up side of this is awesome. Those of you who've been fair and square are basking in the light of all kinds of goodness. On the flip side, if you've been living on the selfish edge of what being human involves, things will soon fly south — if they haven't already started to do so. Libras can be the kindest, most well-meaning people on the planet; sometimes to their detriment. But there's a certain brand of Libra that always tips the scales in their favor, and if you've been up to too much of that, trust me, there will be Hell to pay.

SCORPIO | Oct. 21 – Nov. 20: You've gotten things together in a good way. Your little show is on the road, and you're feeling pretty good about it. For now, you have enough planetary backup to feel safe about this, but within the next year I see obstacles that will force you to rethink everything. "Not again," you say? You've had to reinvent yourself so many times, it's hard to imagine that it might happen again. Part of the Scorpio deal involves themes of death and rebirth. It's not for me to say when life will stop turning you around, but you might have to be OK with the idea that it will go on forever.

SAGITTARIUS | Nov. 21 – Dec. 20: Well, the scenery has changed a lot in the last few months. What brought this on is hard to say, but it looks like you've come back to life. In the course of doing so, the part of you that's been resurrected doesn't look anything like the person that was here before. A bigger pair of shoes and a wiser, broader outlook is where you're coming from now. If up until this moment other people had too much to say about how things go and who you get to be, the tide has turned, and the deeper part of you is alive and well enough to realize that it doesn't work to give your power away.

CAPRICORN | Dec. 21 – Jan. 20: You guys are in a pickle. If it isn't one thing, it's another. As much as you have the capacity to handle anything, your current state of affairs is so over the top, coming to terms with the best way to handle it has got you racking your brain for answers. Other people are there for you, but only up to a point. If you've gotten into the habit of tapping their coffers, to continue to do so wouldn't be fair. If you're caught between following your bliss and needing to get a real job, I suspect that you'll need to bite that bullet just long enough to TCB and get back on your own two feet.

AQUARIUS | Jan. 21 – Feb. 20: Things are bound to get more intense. This could be in a good way, so don't worry; intensity can be awesome in some situations. In others, it can cause us to feel anxious and overwhelmed that things could go haywire at any minute. No matter how it manifests, luckily you guys have the capacity to sit back, detach, and watch the show. For the next few months, keep an eye on the things that other people do to complicate life and don't get caught in their web. Keep your distance, keep your mouth shut, and watch what happens when others get hung up in their own Ptah.

PISCES | Feb. 21 – March 20: Moving on to the next thing is bound to shake you up. This will come as a blessing. If you stayed put, you'd wind up stuck, and the rest of your life is champing at the bit. You don't have to bury the past, but to everything there is a season, so wrap it up and store it in a safe place because your spirit is calling you elsewhere. As the next few weeks unfold, a number of different people, places, and things will introduce you to who — and what — is next. Pay attention to all of it because this phase of your journey marks the point where everything you've done so far finally comes together.