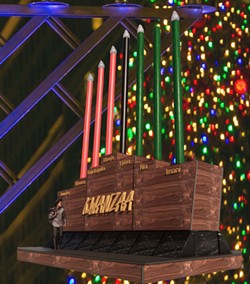 Via Alkebu-lan Village
A rendering of Detroit's new 30-foot-tall Kwanzaa kinara, the tallest in the world.

For years, Detroit has celebrated the holiday season with an enormous Christmas tree and a 26-foot-tall Hanukkah menorah in downtown’s Campus Martius Park. But one of the largest Black-majority cities in the nation has not celebrated Kwanzaa with a large kinara — until now.

According to a press release, a 30-foot-tall kinara monument will be erected in Campus Martius Park for the first time this year, believed to be the largest in the world. The monument will be on display for the entire seven days of Kwanzaa, which lasts from Dec. 26 to Jan. 1.

A Motor City Kwanzaa celebration is planned from 3-4:30 p.m. on Monday, Dec. 26 at Beacon Park with a live virtual presentation by Kwanzaa founder Dr. Maulana Karenga, a performance by the African drum and dance group Nanou Djiapo, a demonstration from Alkebu-Lan Warrior Martial Arts, and remarks by organizers and sponsors.

Officials will then lead a procession to Campus Martius Park for a kinara lighting ceremony at 5 p.m.

The events are free and open to the public.

The development comes two years after Metro Times asked why the city celebrated the holidays with a giant Christmas tree and a menorah, but not a kinara. At the time, the city’s director of arts and culture Rochelle Riley expressed interest in a kinara monument, and surmised that the reason the city had not pursued one earlier was due to financial constraints and a lack of corporate sponsorships.

The kinara monument is made possible by the City of Detroit, the Downtown Detroit Partnership, Alkebu-Ian Village, Councilman Scott Benson, and the Charles H. Wright Museum of African American History.

“The Downtown Detroit Partnership, known for programming and managing year-round placemaking initiatives and events within Downtown Detroit’s historic and transformational public spaces and parks, is proud to expand its recognition and inclusion of holiday traditions,” organizers said in a press release. “The creation of the kinara display brings the public together to embrace the city’s rich diversity in the award-winning Campus Martius Park, the site of Detroit’s point of origin now known as Detroit’s Gathering Place and a destination for more than 4.5 million residents and visitors annually.”

“I have observed Kwanzaa annually for years and am happy to be part of the DDP Parks team to support all of the involved entities to bring this positive beacon to the heart of the city,” DDP producer Njia Kia said in a statement. “Everyone is welcome to embrace Kwanzaa’s principles, which are universal, and celebrate the lighting of the black candle signifying unity on Day One of Kwanzaa.”

More information is available at alkebulanvillage.com/kinara. 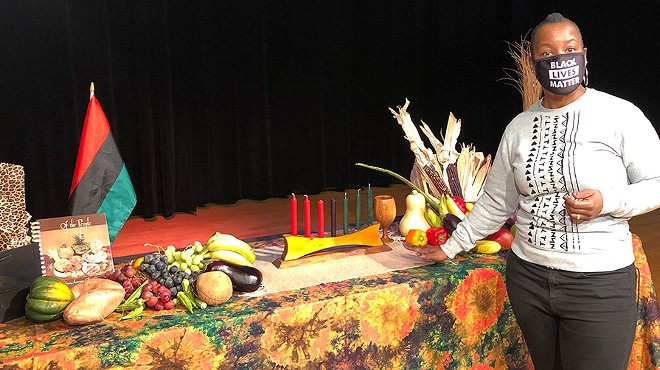 Leyland "Lee" DeVito grew up in the suburbs of Detroit, where he read Metro Times religiously due to teenaged-induced boredom. He became a contributing writer for Metro Times in 2009, and Editor in Chief in 2016. In addition to writing, he also supplies occasional illustrations. His writing has been published...
Read More about Lee DeVito
Scroll to read more Culture articles