Taking Hash Bash to the next level 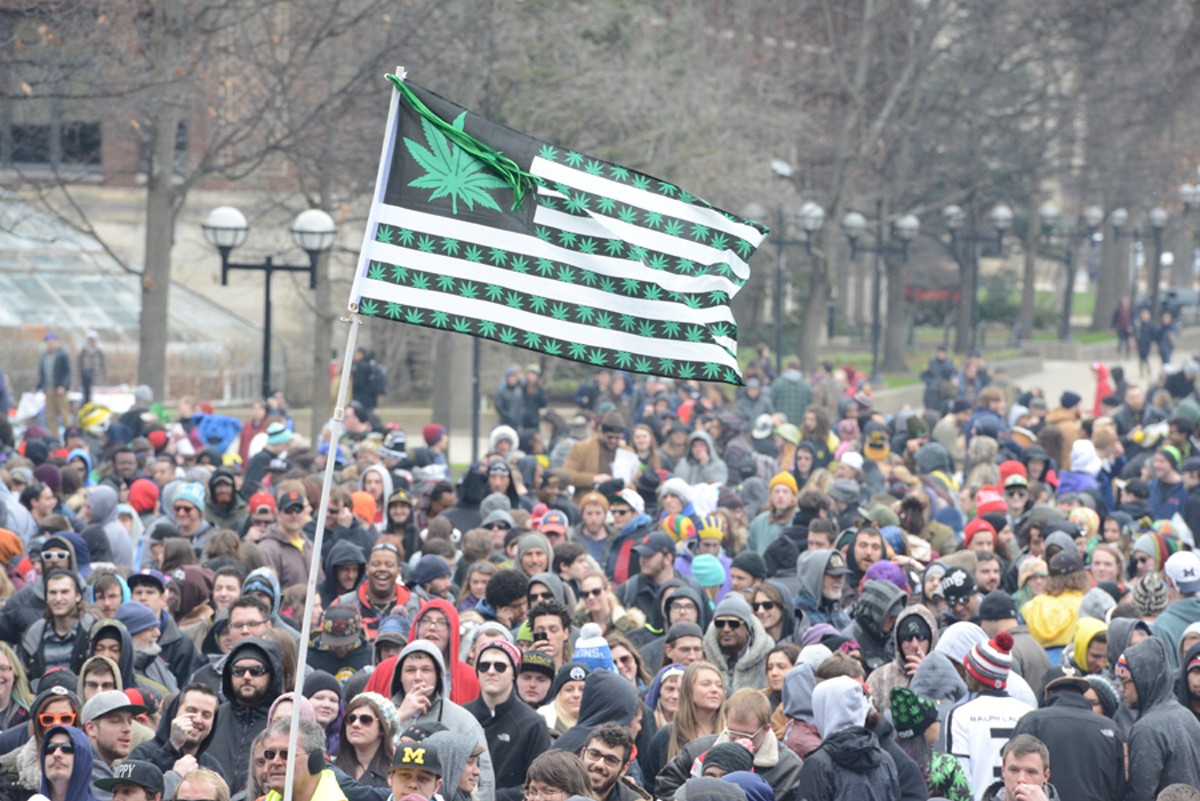 Could 2018 be the Hash Bash to end all Hash Bashes?

Well, it could be the end of Hash Bash as we have come to know it, because 2018's could be the last one while marijuana is still illegal in Michigan. A pending ballot initiative now with the state legislature would put the question of legalizing recreational marijuana on the fall ballot.

If the initiative passes, the next Hash Bash will be held in... shall we call it "free territory"?

The Hash Bash proper, the thing that has been going on for 47 years, is a two-hour smoke-in, protest, and political rally that takes place on the U-M Diag starting at noon on April 7 this year.

The first bash, in 1972, was timed to take advantage of a Michigan Supreme Court ruling that temporarily left marijuana legal in Michigan for a short while. Since then it's been held under the duress of prohibition. Even Ann Arbor's famously lenient pot laws don't apply because the bash is held on campus, where state law and city law doesn't apply.

Regardless of the law, and the occasional bust by campus police, marijuana smoking is rampant among the huge crowd that shows up — hey, it's a "smoke-in." Last year, a reported 6,000 to 7,000 attended the rally. This year's event, with a legalization effort to focus on, should attract even more people (if the weather cooperates).

"I am excited to witness the end of cannabis prohibition in Michigan," says Bash organizer Nicholas Zettel. "The energy that culminated to make the legalization petition drive a success is continuing to build and grow. Hash Bash has been steadily growing since the passage of Michigan's Medical Marijuana Act in 2008, and I believe this year could see the largest attendance in the event's history."

To do that, attendance would need exceed 15,000. But that's doable, as the stigma against marijuana eases and more people are willing to come to the party.

Although there is smoking and music at the Bash, the party really takes off at the Monroe Street Fair, which starts at noon but lasts into the evening with a stage, bands, speakers, and a whole lot of marijuana circulating in the crowd. In its 17th year, the Monroe fair is a clever way to take the people off campus after the Bash, avoid the police, and keep the party going. Consider it something of an Oktoberfest, with marijuana's lovely green leaves replacing the beer and lederhosen.

With this demonstration of longstanding loyalty to the Hash Bash brand, it's a no-brainer that it's here to stay and will probably grow. For one thing, next year's event could be a huge celebration of a legalization victory... if that happens. And there will be the federal laws to target for change. So there will still be plenty to protest, and no doubt plenty to smoke.

A changing of the law and a few rules will open the door to more spinoff events, such as the Hash Bash Cup. Now in its second year, the HBC is a three-day festival taking place concurrently with Hash Bash weekend at the Wyndham Garden Hotel & Hampton Inn. It is a Cannabis Cup-type marijuana competition with judges handing out a trophy.

"That event has been created to offer safe access to folks who come to Ann Arbor looking for more than a one-hour rally on the Diag at high noon," says HBC organizer Adam Brook. "We will have three days of live entertainment, vendors, glass blowing, food trucks, oh, and don't forget about a pool for what both High Times and WeedMaps employees said last year was the best event they'd ever seen. We take over the whole hotel. You have to have a room or ticket to get in."

If you're going to hang around for the third day of the HBC, then you may as well check out the Athletes and Cannabis panels on Sunday at 2 p.m. at the Michigan League. This one features currently active Detroit Lion Mike James, former Red Wing Darren McCarty, and former NFL player Eugene Monroe. The panel will be moderated by Dr. Sue Sisley, a psychiatrist, former University of Arizona assistant professor and researcher studying marijuana and PTSD.

All told, you have the protest, the party, the competition, and the medical discussion. This shows growth and depth and illustrates how the Bash has potential to go in a number of directions.

"Cannabis should never have been made illegal, and now its huge potential can be realized in many ways," longtime Ann Arbor activist Chuck Ream says.

Indeed, cannabis could be a huge part of the economy when you factor in the thousands of industrial uses for hemp, including medical and recreational applications. When one considers all the salves, ointments, tinctures, and oils on the market already, it looks like recreational use could be an afterthought in a fully integrated industry. Events like Hash Bash helped pave the way for these changes and will continue to be an integral part of moving marijuana forward.

"I also believe the end of prohibition will only make the event larger and more important," Zettel says. "There will always be the need to ensure legalization is administered in a fair and equitable manner, and there are even some issues that could not be included in the recent ballot proposal that are very important. Among them are expungement, exoneration, racial equity, and finding creative ways to reverse the harms of the Drug War. These topics are becoming more and more imperative as cannabis becomes legal and acceptable across the country."

As we move into our electoral season with marijuana as one of the hot topics, it's instructive to note newly elected Rep. Conor Lamb of Pennsylvania, a Democrat. He won a hotly contested special election last week by a razor thin 627-vote margin. Almost anything could have made the difference in sending the democrat to Congress, including his stance on marijuana. During the campaign, Lamb discussed his support for Pennsylvania's medical marijuana law that was signed in 2016. His opponent, Republican Rick Saccone, reiterated his opposition to that medical marijuana law, which has more than 80 percent voter approval. Lamb said that he supported medical marijuana as long as it was well regulated. It's impossible to say how much of a difference his position made for voters.

The bottom line is that he supported medical marijuana and won. Saccone opposed marijuana and lost. It used to be automatically the other way around when it came to the herb.