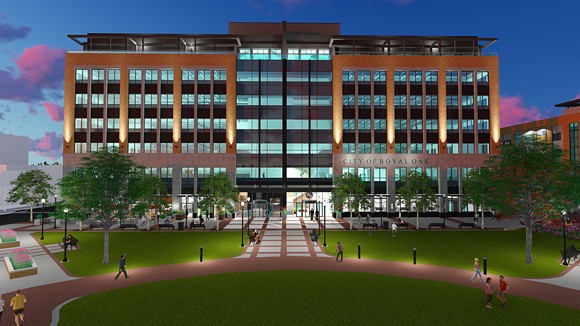 When Jason Gittinger opened the Detroit School of Rock and Pop Music on Washington Avenue eight years ago, the economy was at low tide.

The school — which has about 125 students at any given time — has only grown since then, Gittinger says, and the same could be said for the city where it’s located.

With several landmark developments in different stages of completion at the same time downtown, a hot residential market, and commercial rents reaching as high as $30 per square foot in prime spaces, Oakland County’s hip center is transforming, and not for the first time.

Gittinger took a creative approach to remodeling his 3,500-square-foot space, and saved money in the process: The flooring underneath the practice rooms and studio is a repurposed basketball court from the former Michigan State Fairground.

A blueprint on the wall in an office at Gittinger’s school sketches out plans for a 300-seat venue — part of the 38-year-old drummer’s dream of a home for an ensemble that would be the rock and pop equivalent of the Detroit Symphony Orchestra. Photo by Dustin Blitchok
Jason Gittinger at a drum kit at his Detroit School of Rock and Pop Music.

“I don’t know how we get there, but it inspires me every day,” he says.

Gittinger serves on the board of the Royal Oak Chamber of Commerce, and from that perch sees about eight to 10 new businesses open each month in the city, many of which are service businesses and restaurants.

“I don’t think I could afford to build this place today,” Gittinger says of his school. “That’s not a product of Royal Oak. That’s a product of the market right now.”

A central park, a hotel, and SoMa

Across Woodward Avenue from the Detroit Zoo, an oddly shaped 4-acre parcel owned by the Downtown Development Authority that’s been the subject of development talk for years is closing in on an ink-on-paper deal for a 225-unit, $40 million residential project.

The deal would have Singh Development LLC buy the property for $2.5 million — fair market value — from the city and build attached townhouses and studio apartments around a central pool, with retail facing Washington Avenue. The West Bloomfield-based developer is using the working title of the “SoMa District,” for South Main Street. The Royal Oak complex would be Singh’s 21st multifamily project in the metro area.

SoMa is expected to go to a vote at the August DDA meeting, says Todd Fenton, the city’s economic development manager, and comes after many previous proposals for Royal Oak’s southern gateway fizzled out.

“They wanted to make sure it was a showcase building,” Fenton says of the DDA.

Both Fenton and Gittinger point out that independent retailers in downtowns such as Royal Oak’s continue to struggle with making rent and competing with online shopping — and it’s not a challenge unique to the city.

At the same time, businesses such as the late Incognito, Noir Leather, UHF records, Funky 7, and dozens more past and present form the backbone of Royal Oak’s transition from a sleepy suburban downtown to the artsy, creative one that took off in the 1990s.

The means to support small businesses in Royal Oak is to increase 9-to-5 foot traffic, Fenton says, and the focus on bringing in more Class A office space is spelled out in the city’s economic development strategy.

“The strategy is: If you can bring more 9-to-5 office users into the downtown area, that will raise all boats,” he says.

To that end, Etkin development has an agreement with the city to build a four-story office building between 60,000 and 80,000 square feet where a parking lot sits today at 11 Mile Road and Center Street.

The city recently extended the due diligence period for the project, Fenton says. Burton-Katzman’s proposal includes a parking deck, as the city requires projects that replace parking lots to include a parking component.

“I get a lot of day-to-day interest from people who want to move [their office] into Royal Oak, and they can’t find the space,” Fenton says, adding that downtown Royal Oak’s office vacancy rate is 3.4 percent.

The largest and most complex development on the horizon downtown would deliver a new space for Royal Oak’s City Hall, 190,000 square feet of office space, a new police station, and a public gathering space.

A conceptual plan for the project, which would be paid for with $100 million in both private and public funds, was floated by the Central Park Development Group at public presentations in the spring.

In the lead-up to the proposal now known as Royal Oak City Center, the city was in discussions with Birmingham developer Jeffrey Surnow. A few months after the city entered an agreement with Surnow, he was killed in a bicycle accident in Hawaii.

If “everything goes right,” a development agreement for Royal Oak City Center could be in place by Thanksgiving, Boji says.

Fenton says the city is working on the outline of a development agreement.

“We’re not afraid of aggressive timelines. We just need to make sure the project makes fiscal sense to the city.”

Royal Oak City Hall, constructed in the 1950s, was deemed functionally obsolete in a study commissioned by the city, Fenton says.

City Hall was constructed on the site of a Depression-era park, and with the demolition of the existing building and the opening of what’s being called Central Park, Royal Oak would have a public gathering space of a kind that doesn’t exist in today’s downtown.

The structure of a deal with the Central Park Development Group would have the city paying for its share of the project — a new City Hall and police station. Royal Oak would hold title to everything but the office building, Fenton says, and both he and Boji say the Central Park Development Group would purchase the office building at fair market value.

The project would likely be financed through bonds, and not a millage increase. The city views tax increases as a “non-starter,” Fenton says.

Boji, who lives in Orchard Lake, caught the attention of WJBK Fox 2’s M.L. Elrick earlier this year in a story that highlighted a $134 million deal for Michigan Senate office space in a Lansing building owned by Boji at the same time the Boji Group owed back taxes.

After the Fox 2 story ran, the Michigan Democratic Party held a press conference calling for the Boji Group to be banned from state contracts, the Detroit Free Press reported in March.

The developer’s deals with the state “have all been open, competitive bids,” Boji says, adding that he finishes projects on time and within budget.

“I can’t speak for why a [political] party feels the same way or not.”

In the 1980s, stores in downtown Royal Oak would close at 5 p.m. and there would be no cars on the street, says Noir Leather founder Keith Howarth.

“It reminded me of a science fiction movie, where you go into a city after an atomic bomb detonates — all vacant, no cars,” the affable, soft-spoken Howarth, 62, says over lunch at Iron Horse.

Photo by Dustin Blitchok
n “I could see after three years in business that Royal Oak was going to be a place to own property,” says Keith Howarth, who opened Noir Leather in 1983.

A one-time furniture conservator at the Detroit Institute of Arts, Howarth first opened on Third Street in December 1983, having taught himself the art of leather craftsmanship.

Howarth was part of the Bookie’s scene, and Noir Leather’s beginnings were influenced directly by punk rock.

The store “always sold restraints and S&M stuff,” but wasn’t a sex shop, Howarth says. Early on, Noir caught the attention of a city attorney, and Howarth brought wristbands, belts, and bandanas to show what he was producing.

He was making bondage restraints at the time, but told the attorney “they were bracelets.”

It was one of many instances where Noir Leather caught flak in a city where church groups would discuss Howarth’s business “and talk about how evil it was,” he says. “Royal Oak was very conservative.”

When Noir Leather opened, rent was $500, and later about $1,300 when the store moved to Main Street. At his present location at Fourth and Center, Howarth says he’s paying about $3,000 a month.

“I could see after three years in business that Royal Oak was going to be a place to own property,” he says.

Howarth counts the Patti Smith clothing store and Incognito — “they were the kingpin of Royal Oak at the time” — among the other businesses that brought an alternative vibe to downtown. By the early 1990s, they’d been joined by record stores, coffee shops, and numerous other clothing boutiques.

On Saturday nights, customers would go from store to store and mingle. “It was a great meeting place,” Howarth says, full of people with a shared love of music.

Noir Leather once held Valentine’s Day lingerie shows with live models who would rotate every 20 minutes, drawing crowds of about 200 people. The city stopped the shows in 1993 with the creation of a special event ordinance, Howarth says.

Noir sells restraints, whips, crops, nipple clamps, ball gags, and more to S&M customers. Howarth made trips to England in the 1990s to purchase rubber apparel, something he says never quite caught on in Detroit.

“I don’t know if it’s our weather,” Howarth says. “Latex isn’t warm in the wintertime.”

Howarth says he’s watched dozens of small businesses flop within six months to a year after renting a space and completing renovations.

His suggestion: Create a space downtown where retailers can rent at a lower cost in a mall-like setting, in the same vein as Ferndale’s Rust Belt Market.

Royal Oak is now known for its restaurant scene, Howarth says, and the groups of young people gathering outside his store are more likely there because it’s a PokeStop, not because they’re punk rockers. The city’s in a good place, but “I do wish it was edgier,” he says.

The longtime retailer attended a presentation on the proposed Royal Oak City Center development and came away in support. “There are some details that have to be worked out yet with the planning,” he says.

Howarth, who recovered from a brain tumor in 2013, says the city has embraced his business in the last decade. His wife, Kathleen Fegley, served a stint on the DDA board.

In 33 years in Royal Oak, Howarth has moved three times and nearly relocated to Ferndale once. As Royal Oak enters a possible building boom, Howarth says Noir Leather, the most independent of businesses, isn’t going anywhere.