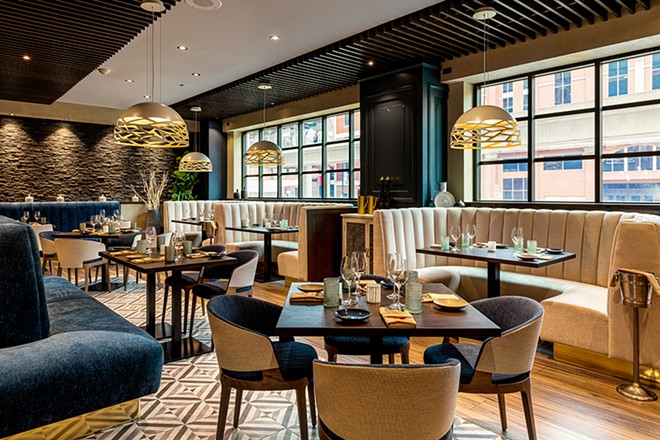 The Mediterranean-inspired spot is owned and operated by the Papas family, the people also behind Greektown’s Pegasus Taverna, A Bar, Mosaic, and Santorini Estiatorio.

“Since we opened Mosaic and Santorini Estiatorio, we’ve been eager to introduce another restaurant concept in the Greektown district,” Athina Papas said in a press release. “Symposia will build on our commitment to preserving the cultural aspects of the area, as well as enhancing the community moving forward.”

The restaurant features a menu created by executive chef Elliot Patti, who previously worked at acclaimed restaurants around the world.

“The menu for Symposia is a culmination of my culinary experiences,” Patti said in a statement. “I twist authentic recipes by taking liberties with unexpected juxtaposition. I look forward to serving these dishes to our guests.”

The restaurant is named after Plato’s “Symposium,” which is depicted in artwork on display in the nearby Atheneum lobby.

“We didn’t have to look far for inspiration,” said Papas. “The art piece in our A Bar of Plato’s Symposium inspired the vision for the restaurant. Symposiums of ancient times were used as a space to gather, drink, and dine in celebration of an exchange of ideas and philosophies. In that same spirit, Symposia provides a welcoming atmosphere for family and friends to gather while savoring our unique cuisine.”

The restaurant has a capacity of 65 and will be open for dinner from 5 -10 p.m. Tuesday-Thursday and 5 -11 p.m Friday-Saturday.

Symposia is located in the Atheneum Suite Hotel and Conference Center at 1000 Brush St., Detroit; 313-962-9366; symposiadetroit.com.