Heir to the throne 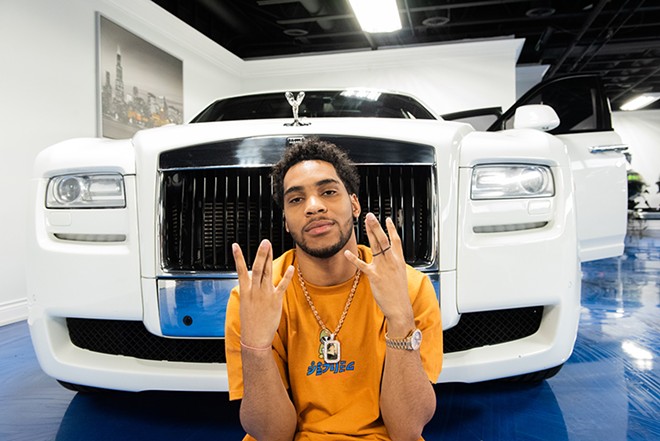 Kahn Santori Davison
Darnell Lindsay Jr., 22, was only 5 years old when his father, the late, great Blade Icewood, was killed.

Darnell Lindsay Jr. is sitting in an unused office at Auto Kingz in Dearborn, talking to a mechanic about modifications he wants to make to a CRT he’s acquiring soon. Dressed in a brown T-shirt and Amiri jeans, he patrols the rest of the showroom like a kid in the Hot Wheels aisle of a toy store, making a hard stop at a white Rolls Royce. He gets in the back, inhales the plush interior. Lindsay has a gauntlet full of dreams and aspirations, and this car is likely one of them.

Known as Lil Blade, Lindsay has never been able to dodge the comparisons to his father, the late great Blade Icewood (Darnell Lindsay Sr.). Although the 22-year-old was only 5 when his father was murdered, he has his father’s mannerisms, voice, and a uncanny resemblence to him.

“What’s crazy is that I already knew the music,” he says. “I couldn’t even tell you how. There’s a video of me when I was like 4 years old rapping ‘Boy Would You’ word for word. I always knew every word to every song.”

Lindsay grew up knowing his father was a local musical legend, but the fan worship, love, and pure excitement he’s shown as his son is something he’s never gotten used to. The name Lil Blade is a moniker that was given to him years before he adopted it.

“At first I hated being called ‘Lil Blade,’” he says. “I was like 12 or 13 and it was the first day of football practice. I guess one of the coaches was a homeboy of my old dude. All I heard was, ‘Lil Blade!’ And people started going crazy.”

Lindsay attended Walled Lake Central High School, where his popularity steadily grew. He inherited his father’s charisma, as well as a penchant for Cartier glasses and expensive gold chains. He’s quick to point out that he was never an arrogant or obnoxious kid, though, and played basketball and was cool with everybody that was cool with him.

“Tee Grizzley did that song with Jeezy where he said, ‘Rest in peace to the Great Lakes ruler Darnell Lindsay,’ and people was coming up to me in school like, ‘Tee Grizzley’ just said your name in a song,” he says.

By the time Lindsay was 16, he decided to forfeit his hoop dreams for a career penning bars and punchlines. He had been a hip-hop fan for as long as he could remember, but once he got behind the mic, an addiction sprouted.

“The first time in the studio was 2015,” he says. “I had my homebody Cam Dinero. I started lying to my momma telling her I was going to the gym but I would be going to the studio.”

The more time Lindsay spent in the studio, the more he wanted to be in the studio. The self-fulfillment and solace he discovered was much like a basketball player finding sanctuary in an empty gym.

“What’s crazy is that I already knew the music. I couldn’t even tell you how. There’s a video of me when I was like 4 years old rapping ‘Boy Would You’ word for word. I always knew every word to every song.”

Lindsay pauses, looking out the window. “My uncle told me if you wake up in the morning with the same thing on your mind and on your heart everyday, then that’s what you’re supposed to be doing,” he says.

His first track was 2015’s “Picture Me Rollin,” in which he lyrically flosses over 2Pac’s instrumental of the same name. The cover art featured a playful childhood photo of Lindsay and his dad. In 2017, he followed it up with his first mixtape, Prince of the D. The mixtape was received well, but in hindsight Lindsay can hear his growing pains.

As Lindsay’s 2018 senior year was drawing to an end, all he could think about was a career making music. There would be no college applications, no ACTs, or SATs — just countless daydreams about platinum plaques and sold-out shows. He dropped his second mixtape Prince of the D 2 the day he graduated. This time, the artwork was a cleverly Photoshopped photo of Lindsay sitting next to his dad in a car.

“I had a plan in my head, I was going to just graduate high school and blow up off rap,” he says. “It didn’t really work out like that, but it’s still coming together.”

The mixtape brought Lindsay more followers and fans, but there wasn’t that viral reaction Lindsay was hoping for. He didn’t want a participation trophy or a “pass” because his dad was a legend; he wanted his music to resonate and be respected. A year after the release, insecurity and doubt sat in.

“This is the point where life hit me,” he admits. “Like that year after high school I knew I had to figure something out. I went through a slight depression. I had to go see a therapist, I had to climb my way out. I’ve always put a lot of pressure on myself because I just know what I want for myself.”

There were friends insinuating he wasn’t good enough, family suggesting he find a different career path, and his mother was still pushing him to go to college. Lindsay often reminded the people closest to him that he didn’t choose to be an emcee because of his dad, he chose music because it was his passion. The struggle for acceptance of his artistic identity is a battle he had to fight with others as well as within himself.

“I used to really look at myself in the mirror ... I had to roll with the punches,” he says. “I feel like that’s something everybody goes through in life. I was 19 years old, me and my mom had gotten into it. I went to live with my grandma. My license had got suspended. I wasn’t making no money. I had nothing to do but time to think.”

More music followed. In September 2019 he released a remix to his dad’s timeless hit, “Boy Would You,” that featured hip-hop heavyweights Payroll Giovanni and Peezy.

“Your bitch told me when I fuck, she want my chain on it/ white diamonds Russian cut, it look like cocaine on it/ It be the lamest niggas talking about they getting paid/ Fucking up they last trying to flex on Lil Blade,” he raps.

“Somebody gave me the idea in a DM,” he says. “I called Payroll and he thought I was playing. Peezy was on deck. Payroll did his verse separate and me and Peezy was in the studio together.”

He dropped his third mixtape, Ahead of My Time, at the top of 2020 and Money Makin Blade several months later. Songs like “Far From a Thug,” “Come this Far,” and “Be With You” showed growth and progress.

“I got everything she need, so she rather be with me/ She want it in the car, and I’ma put her on the seat/ Tell her, ‘Pull up the bar,’ we get gon’ off of drinks/ Got the bitches starin’ hard, ‘cause I froze every piece,” he raps in the melodic “Be With You.”

“Ahead if My Time was the first mixtape I made that actually woke people up,” he says. “People started to see it then.”

With streams and his reputation on the rise, other business ventures presented themselves. On Jan. 28, he collaborated with Hyman Cannabis to release a strain in honor of his dad called “Platinum Rose”.

“A mutual friend made the connection,” he says. “I was iffy about it at first but once everything made sense, I met the guys at Hyman and they were great guys. The relationship and vibe was there.” 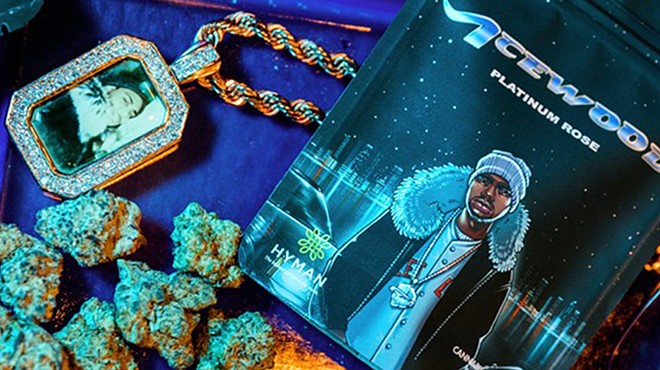 Lindsay also has a merchandise line named Icewood Forever, and he relicensed his dad’s Icewood Entertainment imprint. Currently his primary focus is his album Playah Shit. The album features production from producer Gaddy, and Lindsay feels as though this will be his most complete project to date.

“I call it an album because this is the project that's going to do it for me,” he says. “I put the most effort in it, I took my time and you can hear in the beats and rhymes and the topics I’m talking about.”

Lindsay promises Playah Shit will be more slick than gritty — much more Drayton Jackson behind the mic than O-Dog. No trap house narratives and tough-talk rhetoric, just good vibes and smooth shit.

“It's about being cool and laid back,” he says. “Get ya money and mess with the ladies. Everybody ain’t gotta be a goon or a tough guy … That’s the type of guy I am. I love women. I would rather go kick with some ladies than sit up and get high with some dudes all that. If my homeboys having something I don’t want to be there is no ladies ain’t there.”

Ultimately, Lindsay is still the same kid trying to “blow off rap” as he was in high school. But now he’s more patient, more mature, and he sees the long game of it all, willing to commit himself to the process. Success doesn’t have to happen overnight, and everytime he puts pen to paper, he gets closer to his goal.