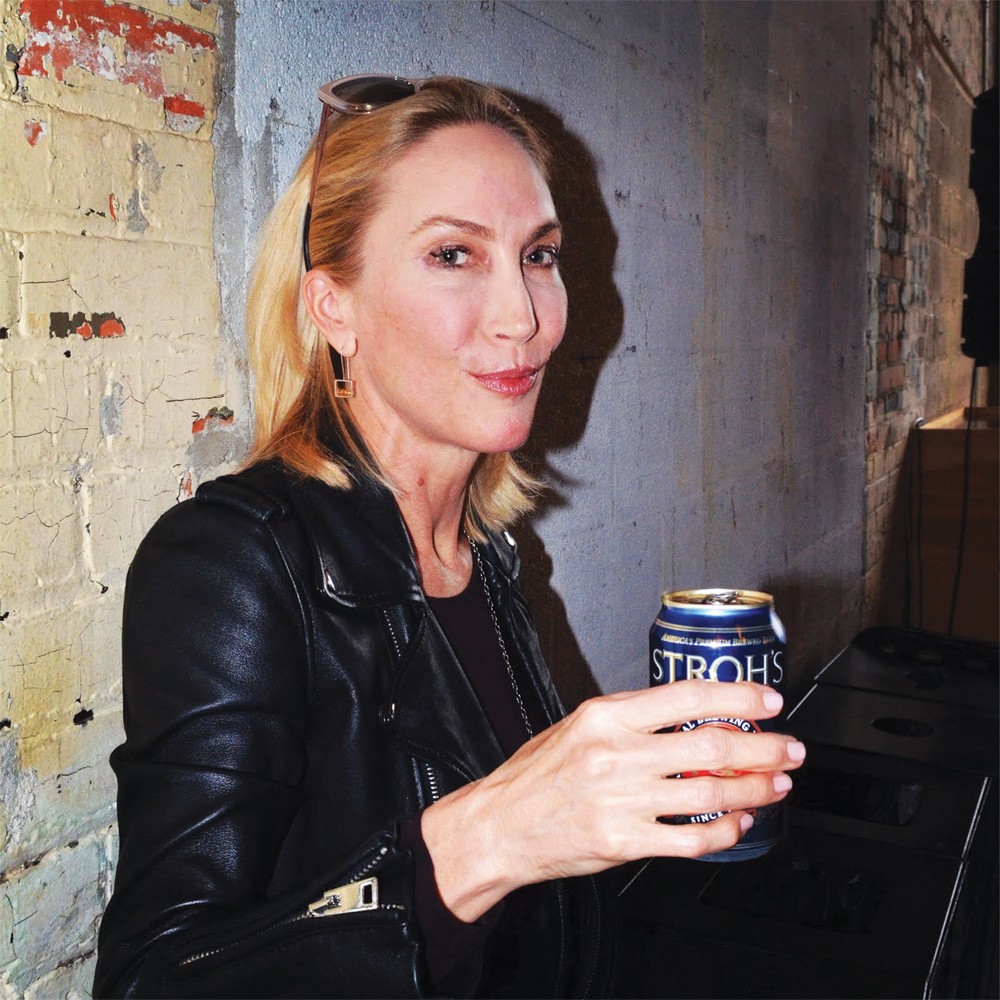 Frances Stroh with the beer bearing her family’s name at a June appearance at MOCAD. | Photo by Dustin Blitchok.

Many metro Detroiters of a certain age have fond memories of visiting "The Brewery on Gratiot," where Stroh's beer was brewed from the 1860s until 1985. Now, three decades after the original brewery was demolished, Stroh's beer is again being brewed in the city it called home for a century and a half.

In June, the U.S. Alcohol and Tobacco Tax and Trade Bureau granted new label approval for the venerable Stroh's bohemian-style Pilsner brand, to be brewed by Brew Detroit, a Corktown facility that contract brews beverages for Atwater Brewery, Motor City Brewing Works, and others. The new label, which reads "Proudly Brewed in Detroit, Michigan," features a throwback orange, red, and black color scheme and the heraldic lion logo so familiar to generations of Detroiters.

Founded in 1850 by Bernhard Stroh, Stroh Brewery Co. was at one time the third largest beermaker in America, worth $700 million according to a 1988 valuation by Forbes. But shortly thereafter, massive amounts of debt taken on from the acquisition of Schlitz and other breweries helped lead to the company's demise. Its brands were sold in 1999, with the Stroh's beer name now owned by Pabst Brewing of Milwaukee, Wis.

Brew Detroit opened in early 2015 with the goal of providing additional capacity for other area breweries to keep up with growing demand for their products without having to physically expand. Ken Belau, a 20-year veteran of the Michigan brewing scene who received formal training in Germany, oversees the 68,000-square-foot facility.

It is unknown when the Detroit-brewed Stroh's will begin showing up on store shelves, but among those excited about the beer's return to its home city is Frances Stroh, a fifth-generation family member and author of Beer Money: A Memoir of Privilege and Loss, published earlier this year.

"There's nothing more emblematic of the American Dream than both Detroit and Stroh's beer," Stroh said. "When the city and brand fell from their heights, so did the dream itself. The revival of both is very hopeful, and indicative of the deep nostalgia for our manufacturing past felt by Americans. I'm thrilled that Stroh's beer is taking up its rightful place as a symbol of this glorious past."