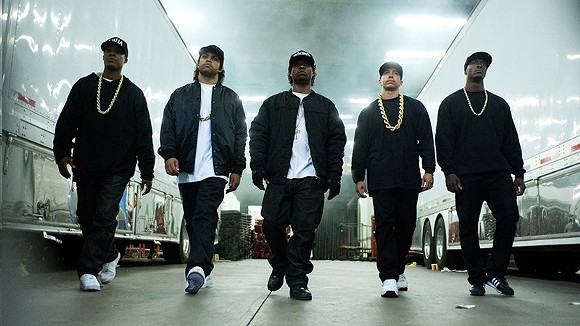 In the film's version of events, the rap group makes a Joe Louis Arena stop during a 1989 tour. Before the show, Detroit police warn the group not to perform their controversial song "Fuck the Police." N.W.A. play the song anyway, stirring the crowd into a frenzy. An explosion sound is heard — ostensibly gun shots — as undercover cops bum-rush the stage. The show ends abruptly and N.W.A. run offstage, only to get arrested in front of rioting fans outside the venue.

It's dramatic cinema. But like most Hollywood movies based on true stories, the real version of events happened a bit differently.

In reality, N.W.A. weren't arrested in front of a cheering crowd — in fact, they managed to evade police long enough to sneak back to their hotel room. But when they returned to the lobby, the police were waiting for them.

"[T]hey took us into this little room. All they did was talk to us. They told us they wanted to arrest us onstage to front us off in front of everybody to show that you can’t say 'Fuck the police' in Detroit."

Pollstar's The Real tracked down Kevin Grove, who helped book the 1989 Joe Louis bill. According to Grove, the explosion sounds were firecrackers — which he believes may have been set off by undercover police to disperse the crowd.

No one in the group was charged. But by Jackson's reckoning, the whole thing was just a demonstration of police power. "They started the trouble," he said. "We only had one more verse to go and that song would have been over. Kids didn’t go kill police."