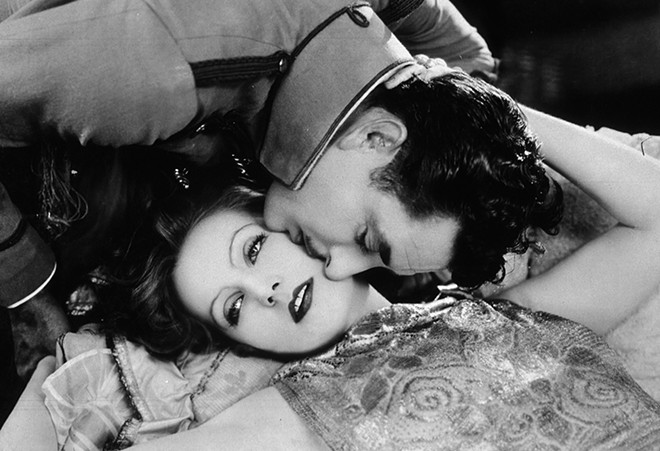 Clarence Brown’s Flesh and the Devil is nearly a century old now, but its story is even older. Starring John Gilbert, Greta Garbo, and Lars Hanson as a trio joined and placed at odds by friendship and by romance, the 1926 silent film (playing at the Senate Theater this Saturday, Nov. 5, as well as Nov. 19) dramatizes the ruptures brought on by unspent desire, and the strains jealousy can bring upon a durable, sworn, and presumably lifelong friendship. In doing so, it casts Garbo, here playing Felicitas von Rhaden, a wealthy beauty who captures male attention, as a kind of homewrecker of male bonds. The temptations she introduces into the men’s lives are rooted, it’s said within the film, in the workings of the devil: reflecting the kind of faltering, often blinkered spiritual interests of the film’s scenario. But the film’s performances — especially Garbo’s — and its direction are not nearly so thin, allowing it to rise above its story’s native faults.

As two German soldiers living out their years of service between wars, Gilbert’s Leo and Hanson’s Ulrich begin the film in a state that’s largely carefree. Faking sick to play hooky when we find them at the film’s open, the pair make the most of their days off; even the consequences they face when caught slacking seem strangely modest. Partners in a long, homosocial companionship rooted in their time on what they call the idyllic “Isle of Friendship,” they live for the naive-sounding off-duty pleasures of “furlough… home… champagne… sleep!” While more fragments of adult life remain implicit within those ellipses, their shared characterization as boyish, at once mischievous and innocent, colors what follows.

Then enter Felicitas, who shifts Leo’s orientation. Spying her at a ball in a moment accentuated by a swift fade which brings Garbo’s face from a background feature to a scale at which it fills the whole frame, Leo suddenly abandons Hertha, Ulrich’s swooning younger sister, on the dance floor in public, in dogged pursuit of his new crush. (This abortive romantic dynamic toward a potential romance with Hertha seems typical of Leo, who takes her for granted as an accessory to her brother while implying an enduring perception of her as essentially still a child). Contrasting innocence and experience, and pitting innocent, orderly desire against its less publicly acceptable and easily embraced forms, the film’s whole arc stems from this rupture — though it’s a moment that passes by swiftly, and one Hertha bears with good humor.

From there, in one of the film’s standout sequences, Leo follows Felicitas into a shadowy glade outside, a space of mystery evoking the ambiguities of adult life. Edenic in its cast, Leo slips more deeply into infatuation here, each avoidant answer from Garbo’s character (“What does it matter?” “Perhaps.”) making him more captive to her opaque charms. “You seem young,” she remarks late, creating a mirror of the dynamic between Leo himself and Hertha — the key distinction being her willingness to embrace what Leo feels toward her. When the pair share a cigarette, it becomes the screen’s sole source of light between them, an intimate and totalizing space. From there, an affair becomes inevitable.

The interplay smoking requires — of a focused physical dialogue between the face and hands — could hardly be more suited to Garbo. While her expression within the scene is one of patient reserve, it remains intent in ways fated to erupt seconds and then much more time later. I’ll say — hopefully without spoiling too much – that the stuff of real life comes between them, generating distance along with friction. With this comes opportunity for much more florid actorly performance.

Within this period of separation — which Ulrich works to mitigate — the characters find space for agony as well as contemplation, with rifts within and between each figure deepened by romantic longings made, by workings of the film’s compact social world, unsatisfactory or unfulfilled. As the film’s tensions all simmer, with dichotomies between old ties and new desires — loyalty and want, propriety and self-fulfillment — all in play, the film’s mannered world gives way to a manic energy which takes hold of different characters in turn.

Garbo makes the most of this, whether caressing a column with a sense of fulsome suggestion, caught in indecision, or bearing witness to bloodshed and its fallout. Acting richly with her face and hands and allowing her composure to crack more readily than in her later work, she easily subverts the film’s dialogic depiction of her as monstrous; and to its benefit, the characterization never truly lands.

As Leo, Gilbert captures a sense of torn-ness between cordial decency and violent want, swerving between deep resentment and effortful feats of consideration. In his role as Ulrich, Hanson provides a baseline against which the other key players contrast against. The schema works; each is very good in their own way, managing both a certain largeness often deemed alienating today (especially for those dipping a toe in silent film) alongside a more nuanced form of emotional agility that brings the film’s raw feelings — not always accounted for so well by its script — past its time and into the present.

Playing into a desire for naive simplicity, of things making sense and falling into a certain predictable order, the film’s trajectory (and its intended “lessons,” stated as they are) play richly against the sense of turmoil that runs through it. With Flesh and the Devil benefiting from an easy meshing of its cast’s palpable subjective feelings with its own form, the film’s depiction of its characters’ romantic desires refuses to allow for the kind of containment the story attempts. Expressing a deep longing to go back to a more innocent time, a more ignorant and even childlike state, a sense of dissonance brought on through this impossibility brings out a greater sense of tragedy than more forced harmonies in its story would ever likely manage.