With the help of volunteers, Friends of Rouge Park is working to rebuild an underutilized trail with Indigenous roots in the city’s largest park 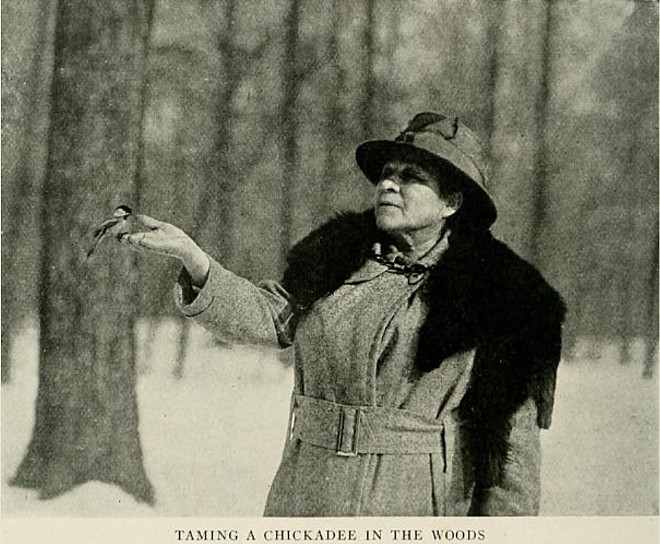 Courtesy of Friends of Rouge Park
A photo from 1920 of Etta S. Wilson holding a chickadee.

Back in the 1970s, Ma’iingan Wildwood Trail in Detroit’s Rouge Park was frequented by thousands of leisurely hikers. It’s overgrown and faded these days, but non-profit organization Friends of Rouge Park is working to revive it while honoring the Indigenous woman for whom it’s named.

She fought for female journalists to cover topics other than fashion (thank the gods), which was common practice in the male-dominated industry at the time.

A ceremonial blessing to rededicate the trail to Wilson was held on Saturday, Sept. 10, as Friends of Rouge Park continues their work to rebuild it. The event filled the trailhead with African and Indigenous music and dance as part of the Detroit Parks Coalition’s Freedom Arts Festival — a summer-long initiative to connect Detroiters with green spaces throughout the city with free art and culture celebrations.

“So much of our history gets forgotten and [Wilson] was critical in helping preserve local habitats,” Friends of Rouge President Sally Petrella says. “Think about, especially during COVID, where we recognized the value of our green spaces and parks as critical infrastructure and places to go to connect with nature. [Wilson] was a big part of the history of that. To connect back to her Native American heritage and the people who lived on this land before white people settled it is really important.”

Back in 1935 when Wilson and the Louisa St. Clair Chapter of the Daughters of the American Revolution got the trail built, it was called the Wildwood Trail. Friends of Rouge Park added Ma’iingan to the name at the Freedom Arts Festival to honor Wilson's Odawa heritage.  Ma’iingan was her father’s surname, which is Odawa for “wolf.”

Following Wilson’s passing in 1936, a boulder and plaque commemorating her were added to the trailhead, but both were later stolen. The 2.5-mile trail all but vanished after a crossing bridge collapsed and maintenance ceased.

With the gracious help of volunteers, Friends of Rouge has already carved out parts of the dwindling Ma’iingan Wildwood Trail over the years, but there is still work to be done, Petrella tells Metro Times. The trail begins near Sorenson Recreation Area, where the dedication was held, and connects to Rouge Park’s Stone Bridge Nature Trail.

“Connecting those two ends of the trail is the next step,” Petrella says. “Since we don’t have the funding to reinstall the bridge we’re having to reroute the trail to use a bridge that goes over the Rouge River at Warren. But on either end, it’s fairly well-established and well-marked. We had some volunteers working on it last week.”

It will also connect with the Detroit Sugarbush Project, where members of the Indigenous community harvest sap from maple trees to use for maple sugar and syrup. The Sugarbush was disrupted by police during a ceremony to welcome the season last year in the same park.

Sugarbush Project organizer Antonio Cosme calls Wilson an early feminist who was fighting for land conservation even outside of Detroit.”

“She’s just one of those people who everything she touched was gold,” he says. “In many ways, her ecological relationship in history marks the beginning of the conservation movement happening during that time too. She did a lot of work to help protect habitats up north at a time when the majority of forests in Michigan were being destroyed.”

Interestingly enough, the reason why Wilson started birding and getting interested in ecology was that an unknown disease left her with paralysis of the neck in 1906. Since it was nearly impossible to look down at her typewriter without pain, as Friends of Rouge tells it, she started looking up toward the sky and became fascinated by birds. She lived near Rouge Park and could frequently be seen birdwatching on the trail.

Wilson also reportedly rejected the Ma’inngan name as a teenager and didn’t embrace her Indigenous roots until later in life. Those roots keep Wilson’s work grounded in ancestral connections to the land as something sacred that needs to be protected.

“It’s so clear that all throughout her career that deep ancestral connection was flowing through her, and that’s beautiful,” Cosme says. “It’s just a testament that it’s never too late to embrace your roots and your culture.”

Cosme and Petrella hope to complete the trail’s connection from Sorenson Recreation Area to the Stone Bridge Nature Trail this fall. It will take lots more volunteers and funding to finish the final loop, from Tireman to Joy Road, which Petrella plans for next year.

At 1,300 acres, Rouge Park is Detroit’s largest, and perhaps most underutilized. Yes, it’s bigger than Belle Isle, despite being much less popular. Maybe rebuilding this trail that was once popular during the park’s heyday will help Detroiters realize its value.

More information about Friends of Rouge Park is available at rougepark.org.