‘The Batman’ does all the things a Batman movie should do 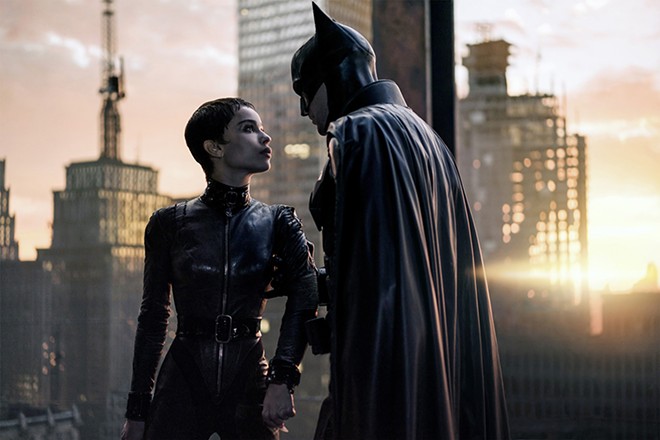 Veering from the false realism of Christopher Nolan’s Dark Knight trilogy and the more earnest fantasias of Zack Snyder’s work, Matt Reeves’s The Batman moves toward a looser and better-humored fantasy space in its treatment of its title figure. With a script that seizes upon even the lowest-hanging sorts of camp morsels — a Catwoman (a game Zoë Kravitz) who makes “nine lives” quips and lingers over the phrase “the Cat and the Bat” — this iteration feels comfortable admitting a level of cheese into its system that Nolan & co. could never have stomached, at least not consciously. The result is unexpectedly welcome, a comic book movie that feels buoyed by a mixture of humility and fidelity to its cartoon origins, and which stumbles only when it grasps at being more.

As a figure — for he can’t really be considered the same “character” in the old literary sense, across so many decades and re-castings — Batman has served as a canvas, usually, for whatever its creators need him to be, whether for commercial or personally driven reasons. Whether a super-cop, a compulsive child-adopter and family man, a James Bond-style super-spy, or technocratic control freak, the man (and that part’s important) has risen to an impossible range of occasions under an even greater variety of circumstances, ideologies, and times. Indefatigable, paternalistic, and discontented as he remains across creative treatments, longstanding commercial success, and a core chameleonic nature have allowed him to be to some extent whatever his creators might like him to be. On the screen or page, in their efforts to build a hero for their respective times and tastes, these artists often reveal stuff they might not wish to: always a risk in making even the most mildly expressive forms of art. With Batman, a bit improbably, film artists often seem to get more license than one might expect — and show themselves accordingly.

As Reeves renders him, Robert Pattinson’s Bruce Wayne is a haphazard, scrappy vigilante activist, exorcizing his own pains by inflicting them — he hopes constructively — on others. Still wrecked over losing his parents at a young age, he’s built a reputation as a sort of urban legend, inspiring fears in the city’s criminal element, which he stirs by surprising crooks where he’s able (“I can’t be everywhere at once,” he remarks), something he tells himself will help tamp down crime. Driven largely by ghostly projections and a kind of stunted empathy — specifically a desire to prevent others from experiencing the sorts of losses he’s felt himself — he operates less from a place of logic than of defiant, reactionary, and broadly directed anger, and is worn thin constantly as a result. Working in the run-up to a contentious mayoral election as his extravagant holdings wither from misuse and neglect, his eyes, along with those of Jeffrey Wright’s Commissioner Gordon (“a good cop,” Batman continually insists) are trained for much of the film’s duration on the corrupt streaks running through Gotham City’s governing forces. His rivals’ villains (more on this later) are fixed upon the same.

While not quite an underdog, Pattinson’s more slender detective feels miles from the rippling, blunt instruments Ben Affleck and Christian Bale each made of themselves for the title role. When he fights, it’s usually against small packs of untrained brutes and amateurs, with the element of surprise and a web of shadows at his back, allowing him to dispatch them with not-extreme advantages in training and equipment. As rendered by Reeves, cinematographer Greig Fraser (also of Dune and Zero Dark Thirty), and production designer James Chinlund, Gotham proves an ideal stomping ground for this, eternally but attractively hazy and underlit. Less industrial a city than a post-gilded age one, the city’s a maze of looming, baroque, and extravagant relics: spaces which feel less useful in remedying the city’s ills than in serving as haunted temples to wealthy civic leaders from some better past. Shooting its darkened, rain-soaked surfaces in hazy shallow focus while deploying scant and mostly practical forms of light (both Edward Hopper and Ridley Scott are clear influences), Fraser and Reeves seem less concerned with making their graffiti-encrusted cityscape credible or familiar than making it evocative and absorbing. And why shouldn’t they? The best comics are made up of fine and rarely realistic drawings, and more filmic work could aspire, given the expense involved, to something like those virtues.

The film’s villain shares its crew heads’ taste for theatrical trails of crumbs, staging elaborate games of murder to lead his pursuers around by the nose. As the Riddler, Paul Dano’s tricks hail from the playbook established in stuff like Zodiac and Se7en, though the film’s PG-13 rating (surely a studio mandate) constrains how far these or the film’s scant carnal elements can go, partially blunting both with kid-glove handling. Reeves and crew make something of the Riddler’s mood-board approach to killing anyway, which seizes largely upon outing corrupt and hypocritical doings by public figures, largely flowing through the domain of the Penguin (a sufficient Colin Farrell buried in prosthetics) in the form of his vaguely seedy/druggy/sexy Iceberg Lounge. Crowing over tabloid photographs and leaked tapes, the Penguin, a self-starting sadist wielding duct tape and a phone camera as principal weapons from behind a sack-cloth mask, provides a good-enough engine for the film that tends not to underline its politics, even as they aren’t so hard to glean. Coming off a little kinky, maybe queer, and eventually as right-wing, his complaints — about corrupt, selfish, and hypocritical oligarchs, of rampant inequality, and of rampant self-dealing — are the sort of obvious stuff you can nod your head at; they’re simple facts of life.

The perverse trouble, though, is that a film’s villains often present its heroes with a problem to solve — and in attempting to theorize solutions, The Batman presents sources of corruption as limited, assailable, and possible to root out. In reality, as most of us should know, they are systemic, and thus persistent, because they’re so diffuse in source. A harm-reduction approach is as good as the Riddler or Batman’s anti-corruption work could really ever get, but neither they nor Reeves and his scripters seem to grasp that it’s the summit of what they might be able to achieve. As the Riddler sketches out a circle of corrupt figures — in city leadership at present, as well as various cherished figures from Gotham’s past — enclosing both Pattinson’s Wayne and his dear, good Police Commissioner Gordon — they suggest at intervals the notion that with better cops, a more thoughtful billionaire, and a sweeter mayor and DA, they might be able to fix things in some big way. Such thinking is a rich person’s progressivism, one which — in courting power — loses sight of what power does, and the film attempts to couple these childlike notions with critiques of a broken-windows-sounding but scarcely visible renewal program that’s at the center of the backgrounded mayoral campaign. A realer class consciousness could have been better wrestled with by giving Kravitz’s Catwoman, who’s a close but less well-heeled foil to Wayne in her endeavors, more space to demonstrate both her mode of working and a better-individuated point of view.

Fortunately, the film’s most naive politics tend to recede in the time spent viewing, only muddying things severely in its final act. They’re by and large eclipsed by the film’s scenario, its figuration of its well-played characters, and its many admirable formal aspects — which suggest a fantastical world shaded by more appropriate levels of cynicism than does the occasionally boneheaded script. While it’s possible, though I’m not convinced, that the stubborn optimism of its writing leavens The Batman, making it more pleasurable than it really had to be, I suspect its virtues lie (along with the aspects mentioned above) in the humility and sense of play it could use still a little more of. In spite of this, it’s surprisingly lively, attractive, and good-humored. While I’d be the last to ask for more movies quite like this — given the glut of big-budget superhero stuff we’ve all been drowning in for years — I can’t deny my pleasure anyway in catching one that feels made a bit more modestly, and that’s attractive, fun, and finely acted on top. While it may sound like faint praise, it feels exceptional to say this considering the climate of Hollywood at present: The Batman mostly does the things it ought to.