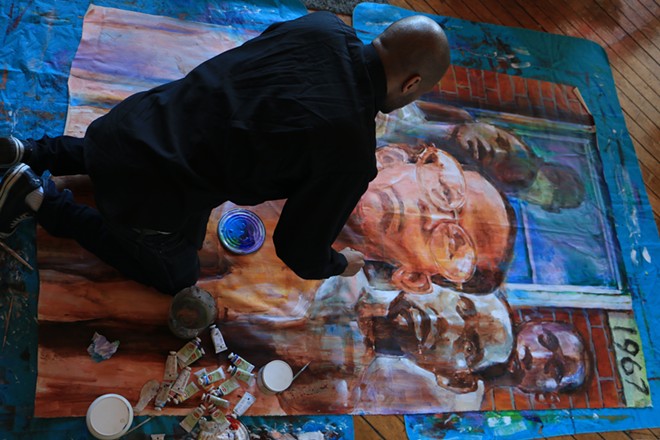 Courtesy of the artist and MOCAD
The artist at work.

Forget about all the things you think define who you are, because the real you is somewhere underneath. To find your true self, you have to disrobe your identity built on culture, beliefs, and past trauma.

Detroit artist Sterling Toles invites you to put all notions of self aside as you experience his latest exhibit, s(h)elves, at the Museum of Contemporary Art Detroit. The show features three installations by Toles incorporating paintings, sound, video, and sculpture. All of the mediums meld together to pose the questions — what, not who, are we truly, and how does it differ from what we’ve been conditioned to become?

“It’s my belief that we’re something way more fluid, interconnected and transcendent than we’ve been conditioned to believe we are,” Toles tells Metro Times. “One of the underlying premises of this whole show is that just as matter is essentially slowed down energy, identity is slowed down spirit. I feel that we are actually simultaneously incarnations of each other.”

The exhibit officially opened as part of the MOCAD’s spring exhibition series with a reception on Friday, April 22, and is on view until June 12. It’s spread across several rooms in the museum’s Mike Kelley Mobile Homestead.

The premise behind the exhibit is that identity is like a shelf, which has to adhere to a wall in order to hold what’s on it.

“In that same sense, we as humans also have to adhere to social walls to be able to hold our experiences,” Toles says. “We want to get past our traumas, our pains, our regrets, our doubts, but how do we do so when we refuse to let go of our identities? There’s a simultaneous feeling of losing one’s identity when letting go of those things that have tormented us.”

Toles later adds, “is the mere idea of our humanity essentially to be a shelf? To become identified by our social experiences?”

One of the installations in s(h)elves features portraits that are partially obscured by pieces of metal cutouts so you never fully see the entire subject of the painting.

“That’s what identity does. It’s a partition that only allows us to show parts of who we are,” Toles says. “Not only are we not seeing others fully, we aren’t showing ourselves fully. We have these impaired views of each other, but we are all in this interwoven experience of communal energy that passes through all of us. Being able to see people fully you will see that, truthfully, they are a part of you.”

That may sound like fringe, esoteric philosophy to some, but Toles is simply presenting the idea that we are all part of universal consciousness, only separated by our human experiences and perceived man-made differences.

Still not making sense? The sheer range of skill and diversity of medium Toles presents is worth seeing whether the underlying philosophy speaks to you or not. People may know Toles as either a painter, rapper, music producer, or activist, but rarely do all of those roles come together as they do in s(h)elves.

Toles calls himself “a rapper on sabbatical.” He started off rapping in the 1990s but eventually transitioned to what he calls a “sound artist” who incorporates several genres. He’s also been a music producer since the late 1990s and was a 2016 Kresge Film and Music Fellow.

His music appears throughout the exhibit. In one room there’s a mini-anthology of tracks he’s created over the years, while elsewhere his sound installation “Rewiring Self” incorporates sculpture and projections. 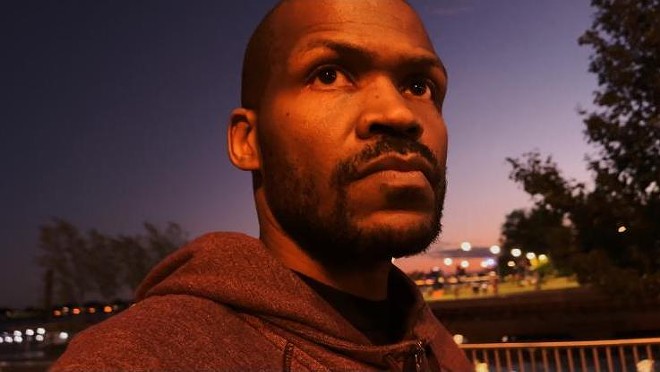 Courtesy of the artist and MOCAD
Sterling Toles.

“The sound is the vibration of the experience that’s navigating through humanity,” he says. “In that installation, there are basically multiple projections of a basement of a building where you see this labyrinth of parks and wires. You’re in the epicenter of where all of this energy is being transferred. Like in life, we have energy being passed to us and through us every second. The sound is meant to be a holder of that experience.”

You may be wondering, like we were, how Toles came to this understanding of what it is to be one with universal energy and everything around us. He tells us that death was one of his first teachers. After the passing of his grandfather at 14 and one of his close friends at 18, rather than sadness, Toles says he felt “greater.”

“I meditated on those experiences and I came to this image of four glasses of water,” he explains. “Someone took one glass and poured it into another glass so the same amount of water was present but in a different container. The feeling of being greater was the people I thought I lost being poured into me. The container was removed but I felt fuller because of it. That is when I realized the falsehood of our separation.”

So, how can we embrace this idea of true identity and let go of the trauma, fear, and conditioning that shape us? How can we experience this interconnectedness that Toles talks about and see ourselves reflected in others? He has a (sort of) simple answer.

“I begin at love,” he says. “There’s a sort of bewilderment and enchantment about that instead of fear for me. I understand that in interacting with other people, they may introduce me to estranged parts of myself.”

The Museum of Contemporary Art Detroit is located at 4452 Woodward Ave. in Detroit. For more information about s(h)elves, see& mocadetroit.org.