In Payal Kapadia’s ‘A Night of Knowing Nothing,’ a filmmaker trusts her viewers 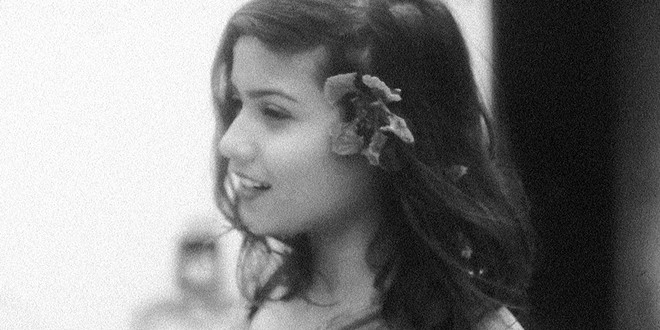 Courtesy photo
A Night of Knowing Nothing pulls from a range of sources, processed to appear together in celluloid-like black and white.

The most familiar way of making a documentary is also one of the least intuitive ones. Stitching together new or archival footage (“B-roll,” as it’s usually called) to illustrate an argument or narrative spat out by a procession of talking heads may be the current standard, but it usually produces something more akin to a lecture than a conversation or personal expression. With Payal Kapadia’s inventive, affecting new film A Night of Knowing Nothing, no real trace of these approaches can be found. In documenting the recent romantic, educational, and activist experiences of university students around India, Kapadia stitches together her footage in such a natural way that every minute of it — and the emotional connections that flow beneath — feels fresh. The result is a work that feels remarkably inquisitive and open-ended, capturing experiences of youth activism, thwarted romance, and recent history as they happen, all while remaining politically and emotionally sharp.

Begun during Kapadia's time as a student at the state-run Film and Television Institute of India (FTII) and chronicling events of the past 3-5 years, Night works to find the emotional heart beating beneath a period of recent political struggle. Examining the social circumstances around a pair of unseen would-be lovers, the film’s action is framed by a (quietly invented) series of found letters from one of them: a student only ever known as “L.” By shaping her inquiry around the sentiments of a pair separated by caste and familial demands, and exacerbated by Prime Minister Narendra Modi’s noxious brand of Hindu nationalism, Kapadia makes a gently present, personalizing fiction a key tool to reflect on experiences both close to and greater than her own.

This collectivistic approach to presentation, an effort to portray a shared experience rather than just a private or closed one, defines the film’s form. While almost all films are made collectively, by teams of skilled collaborators, Kapadia’s structure allows her to make Night a portrait of acute romantic longing — that most personal and individual of feelings — that serves chiefly to reflect upon within the shared experiences which surround and shape it. In terms of running time, L’s letters are only so present, and even then largely as audio straddling the film’s wide array of images. Even so, they lend a crucial sense of balance.

Night’s images (mostly digital) are deftly pulled from a range of sources; archival material, work by contemporary collaborators, and original footage all feature, processed to appear together in celluloid-like black and white. This suggestive approach presents private (as opposed to personal) experience as some wispy kind of myth, evidencing a belief in the penetration of the political and social into the entirety of a given life. In layering its formal materials together this way, Night manages to achieve a very rare thing in presenting a range of individual experiences convincingly as one shared, immediate one, portraying a galvanized student body convincingly as a single whole.

To that end, Night incorporates both intimate-seeming and more public bits of footage, joined through skillful feats of non-linear editing. Kapadia and Ranabir Das (who’s credited as cinematographer, editor, and producer) use pauses, black space, and countless flourishes of sound design, seeking to capture a remarkable range of experience and observation. As skilled at capturing the elegant play of light through a fishbowl on a bedroom wall as they are a heated crush of dancing or protesting bodies, Kapadia and her collaborators manage to conjure a vast range of personal and political sentiments by shaping their work with the generous expectation of actually trusting in their viewers. Composed as it is of both original and found footage — some of it decades old, but presented with a sense of unity — Night at times resembles its own invented letters, feeling like an emotional archive of the present found in improbably expressive and polished form.

The personal and political remain just as enmeshed throughout the film’s action as they do within its fictive romance, but neither this nor its poetic, montage-rooted approach preclude its ability to shock or woo this viewer. Featuring a range of protests against Modi and his allies’ ongoing disenfranchisement of students, non-Hindus, and those in lower castes, Night wraps its arms around experiences of the grimly frightening (police brutality, brewing storms) and gently longing (shots of empty hallways or movies watched in bed) while granting them all the weight of something felt firsthand. Crucially, it also offers more invigorating moments of social, physical, and intellectual connection, rooted in an air of excitement one need not dissociate from youth. In Night’s world, the fact you can dance in a hot room only to wake up in a cell the following morning — or discuss your favorite films only to go on and make one at their level — suggests a willingness to grapple with all kinds of experiential miracles, ones whose natures can be fine or mixed or foul.

Kapadia’s willingness to do this – to try to approximate or generalize about so broad a range of shared experience – might sound audacious, even hubristic. But Night’s air of formal looseness, of being found at an editing table, grants it an air of emotional honesty that ultimately accounts for this. As finely made and balanced as Night is, it retains an ample sense of the subjective, improvisational, and personally expressive; no one could ever accuse it of cool or dispassionate calibration. In this light, her introduction of fictive letters amid a range of mostly unstaged footage reflects upon another impossible-seeming courtship: her own effort to capture the shared emotional experience of a tremendous number of young people. The most durable art’s often powered by just these sorts of dances with the improbable, even ineffable — but it’s at its best when it gets this close.