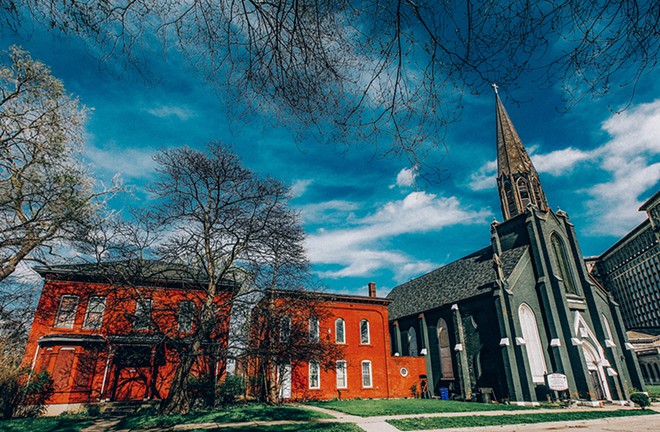 Major label Atlantic Records has announced an official partnership with Assemble Sound, an indie music company that operates out of a formerly abandoned 200-year-old church in Detroit's Corktown neighborhood.

The joint venture will give "Atlantic ears on the ground in one of the world’s most influential and historic music cities," according to a press release.

Assemble Sound was founded in 2015 as a recording studio and coworking space, launching an annual residency program that allows artists full access to their equipment. (Past artists-in-residence include artists Jax Anderson, Supercoolwicked, Gabriel Duran, Tiny Jag, and Sam Austins, who is now on Atlantic, among many others). The company also has a sync department that places songs for clients in film, TV, and advertising. (The company helped place music in Comedy Central's Detroiters, among others.)

The company's co-founder and general manager is Garret Koehler, who first came to Detroit from Chicago as part of an ultimately unsuccessful pitch to bring ESPN's X Games to Detroit nearly a decade ago.

"Garret and the team at Assemble have created a unique, extraordinarily fertile environment for emerging talent," Atlantic CEO Craig Kallman and COO Julie Greenwald said in a joint statement. "By combining free studio space and artist development resources with a yearly residency program for gifted artists, songwriters, and producers, they've created a fantastic place where collaboration is natural and inspiring. The proof is in their amazing track record in nurturing brilliant artists who have landed major label deals. We're incredibly excited to be partnering with Assemble to launch a next generation of talent coming out of one of the world's great music cities."

"Our work has always been anchored in giving artists access to a collaborative creative space," Koehler said in a statement. "It's a simple idea, but when you introduce the right intention and involve the right people, the simplest ideas can be transformative. Our partnership with Atlantic allows us to stay focused on our work knowing that we’ll have the ability to scale its impact alongside a world class team with a proven track record of putting Detroit acts on the global stage."

According to Assemble Sound, when the company first purchased the church, it had only half of a roof, and no plumbing, heat, or electricity. But Koehler previously told Metro Times that they sought an abandoned church for functional reasons as well as spiritual.

"Spiritually, it was like the whole idea was predicated on something like a belief that we don't really know if it's true, but we believe in it, and we want to convene other musicians who believe in it," he said. "And that belief is in a more connected music scene in Detroit is a foundation for success, both for the individual musicians and the scenes that those musicians represent."